This semi-staged presentation of “Tosca” (the first of several) left this listener debating which is the bigger villain: Baron Scarpia or Avery Fisher Hall. The stage had been extended into the Hall; the result an acoustic that metamorphosed from somewhat tolerable to dreadful: from the three different seats I had access to for each act, the balances — to put it politely — greatly favored the orchestra. The strings in particular took on an uncharacteristically wheezy quality, and the stage set-up gave little in the way of acoustic support to the singers.

Oddly, the Hall is at its acoustic-best during the “Mostly Mozart” festival, during which the stage is moved into the hall and the seating arranged around it for rich, reverberant but detailed sound. 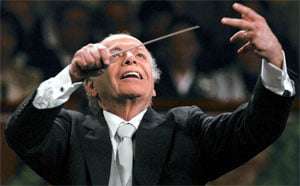 This performance of “Tosca” was done no favors either by Lorin Maazel’s heavy-handed conducting. Yes, the opera embodies the apogee of verismo style, but that should not be a carte blanche for excessive espressivo, particularly during orchestral passages — especially the many unwritten fermatas that overstayed their welcome and also tempos that often alternated between the gas-pedal and brake in which Maazel indulged. The performance was further undermined by phrasing that was a too legato — to the point where the rhythm seemed to disappear — and some ragged, muddied string attacks highly uncharacteristic of the New York Philharmonic.

The upside came in the form of the three principal singers, all making their Philharmonic debut. There has been enormous buzz about Chinese soprano Hui He, and she did not disappoint. Her approach to the character of Tosca contained no surprises — a passionate exterior but a core of steel. Hui’s large voice did not have the bloom I had expected after having heard some of her recordings — and that is most likely a consequence of the hall. Her heart-on-sleeve carried the emotional weight of the music — even through one sustained note that was a hair flat. And her suspended-in-time approach to ‘Visi d’arte’ was thankfully not delivered as a tour de force but a meditative emotional fulcrum point.

Walter Fraccaro sang the role of Cavaradossi at the Met last season; in Avery Fisher, his voice sounded a bit under-powered and almost bleating in the first act, sometimes overpowered by the orchestra. He seemed like a different singer in the third act; his voice took on a warmer timbre, and his solid diction conveyed the increasing tension as the act progressed.

George Gagnidze’s baritone is surprisingly light in timbre; it may not fit some listeners’ presuppositions about how Scarpia should sound, but it added a sinister edge during his quieter musings — and when the music calls for volume, Gagnidze delivers both the requisite power and dramatic electricity. He was far and away the most impressive singing-actor of the ensemble, delivering the dialogue with sinister flair and creating a character that seemed an amalgam of the worst traits of Don Giovanni, Tony Soprano and Dick Cheney rolled into one persona.

The supporting singers were all fine, with tenor Peter Tantsits as Scarpia’s toady Spoletta and male-soprano David Korn who sang the stornello at the opening of Act Three with particular beauty. The New York Choral Artists and Brooklyn Youth Chorus brought the requisite sense of enormity, and goose-bumps, to the ‘Te Deum’ that concludes Act One — despite Maazel’s sluggish tempo.

While the performance overall was a mixed bag, one has to wonder if part of the problem may be Avery Fisher Hall itself. As the structural and cosmetic renovation of Lincoln Center Plaza continues apace, one is left wondering if music might have been better served if some of the funds had gone into gutting Fisher and building the acoustically superior concert venue Lincoln Center so badly needs.