Ravi Shankar
Rāgā-Mālā – Concerto No.2 for Sitar and Orchestra
Haydn
Symphony No.93 in D
Schubert
Symphony No.8 in B minor, D759 (Unfinished) 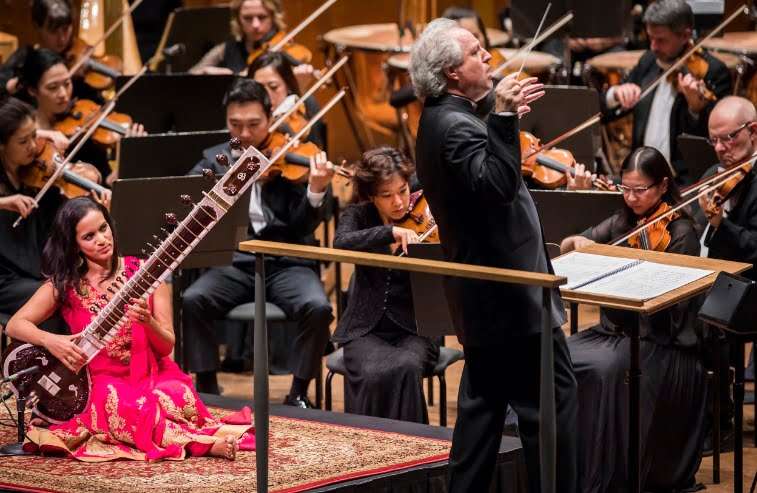 Acknowledged as a pandit (master) of sitar players, Ravi Shankar had a remarkably long career until his passing four years ago, a great loss. His daughter, Anoushka, has also established herself as a major figure in Indian classical and progressive music. Her debut with the New York Philharmonic was an occasion to treasure.

The concert opened with Ravi Shankar’s Rāgā-Mālā (Garland of Ragas), from 1981. Based on some thirty ragas (scalar phrases that form the principal melodic material for much Indian music), the fifty-minute Concerto explores their diverse characteristics throughout four movements. Each raga has an extra-musical meaning associated with times of day, predominantly morning and evening.

Rhythmically complex counterpoint with creative melodic development and interplay imbue Shankar’s fascinating work, the soloist put through his or her paces, the orchestra engaging in dialogue, a mimetic approach; harmony takes a back seat, and complex meters shift the rhythmic emphasis.

After a display of flamboyant percussion, the first movement sparkles with a lively principal subject invigorated with driving rhythms that gives way to somber passages of celestial beauty to usher in the sitar. Brass, harp and xylophone open the second movement with a springy dance, followed by haunting strains on the sitar. To a soft and flowing accompaniment, the sitar opens the slow movement with a dreamy passage from which trumpet tattoos emerge; East and West dance-music is inextricably interconnected. The Finale is a tour de force, beginning with a brisk march, and a whirlwind of rhythms bring the Concerto to a rollicking conclusion.

Anoushka Shankar’s performance was both flawless and mesmerizing. Zubin Mehta, originally scheduled to conduct and, an early champion of Rāgā-Mālā, was forced to cancel due to illness. Manfred Honeck, music director of the Pittsburgh Symphony, did an admirable job of holding this sprawling work together.

Mehta was then due to lead Schubert’s ‘Great C-major’ Symphony. Honeck, a native of Austria well-schooled in its musical tradition, took an exceedingly romantic approach to Haydn 93, laboring to infuse it with over-dramatized power while downplaying wit and charm. Although his treatment of the second movement (Largo cantabile) was both graceful and elegant, the Minuet, a Ländler was made to sound too bumptious through heavy-handed hesitations on the upbeat of the theme. Forced accents and hyper-attenuated dynamic contrasts generated an extremely agitated and overwrought Finale.

In the first movement of Schubert’s ‘Unfinished’ Symphony, Honeck’s attempt to generate a dramatic statement was only moderately successful. No real tension emerged, only strong ffs contrasted with hushed interludes. Although its lyrical lines were nicely shaped, the somber second movement was forced at times and treated rather impatiently.