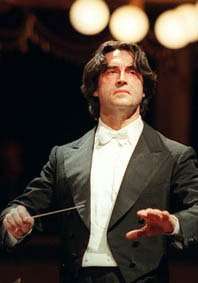 Biographer Alexander Thayer recounts the story of Cipriano Potter, the director of London’s Royal Academy of Music, asking Beethoven in 1817 who he regarded as the greatest living composer, excepting himself. “Cherubini!” was the answer, and on this program Riccardo Muti provided us with the opportunity to hear works by both composers.

Primarily a composer of opera and liturgical music, in 1815 Cherubini wrote his only two significant orchestral works at the behest of the Philharmonic Society of London – a Symphony in D, and the Overture in G which opened the program. The last time the New York Philharmonic (as the New York Symphony) had performed it was in 1892 and it is pleasant enough – some 12 minutes long with a slow introduction and a sonata-allegro main section, using a full orchestra including four horns and three trombones. Muti and the Philharmonic gave it a very sympathetic reading, but in the end it still remained rather forgettable.

By contrast, Beethoven’s ‘Emperor’ concerto is one of the best-known works in the standard repertoire, which in a way presents a special kind of challenge to any young artist. What is he or she going to say about it which hasn’t been expressed so eloquently already by most of the major pianists of the past and present? Lang Lang’s solution seemed to be to concentrate on details and to emphasize contrast – juxtaposing brilliant technical passages with slower lyrical sections played extremely softly. In line with this approach, he sometimes abruptly changed tempos, regardless of what had been going on in the orchestra, which led to a certain amount of push and pull between him and Muti, who tried his best to keep it all together.

However, not even he could unify a performance that was so focused on micro-management that the overall structure of the work disintegrated, and very nearly turned into a string of loosely related episodes. Lang Lang’s choice of pianos did not help the matter either, using a very brilliant, thin-toned Steinway, which pitted an icy sound against the warm sonorities of the orchestra.

The high-point of the evening came after the interval with Hindemith’s one-act opera “Sancta Susanna”. Written over a two-week period in 1921 when he was just 26, it shows Hindemith in his most Expressionistic mode, already a masterly composer and orchestrator. While a concert version of an opera can never provide the full impact of a staged performance, this work is basically a conversation between two nuns and therefore better suited to this treatment than most. An electronic device suspended over the orchestra provided translations of the German text and descriptions of the staging. This was very effective for the most part, but it did seem a little odd to see Susanna standing there demurely while the text read something akin to “She tears off her veil, wimple and shift in ecstasy”. Fritz Busch refused to conduct the work for “moral reasons.”

The intense drama of the music more than made up for the dearth of action on stage. From the atmospheric opening to the passionate ending, the 25-minute “Sancta Susanna” proved to be a riveting work. Russian soprano Tatiana Serjan as Susanna and Austrian mezzo-soprano Brigitte Pinter as Clementia were the impressive major protagonists, and American soprano Jane Gilbert did ample justice to the supporting role of an older nun leading a chorus of twelve women. Juliane Borg and Marcus DeLoach took minor speaking roles. Riccardo Muti’s operatic temperament served him well here, and although he almost covered up the singers at the end, it was a small price to pay for a shattering experience at the work’s climax. “Sancta Susanna” deserves a permanent place in the repertoire.