The crowd-pleasing fare for the New York Philharmonic’s “Opening Gala” Concert – so billed even though the season began a week earlier – had some overlap with recent Philharmonic programs, as the two Respighi pieces had been performed in the orchestra’s free concerts in New York City parks in July. Heard again without amplification and in the only slightly more forgiving Avery Fisher Hall (surely the only time its acoustics will be praised) versus the massive expanse of Central Park’s Great Lawn, they were the successful part of the evening that began as Alan Gilbert led the standing orchestra in the National Anthem, with the also-standing audience singing along half-heartedly.

Fountains of Rome followed the obligatory announcement thanking corporate sponsorship. Respighi’s triptych evocative Roman-themed tone poems are not harmonically innovative, yet his colorful orchestration seems apt for his time, at the dawn of the cinematic age. The composer noted in his score that Fountains expresses “the sentiments and visions suggested to him by four of Rome’s fountains at the hour in which the character of each is most in harmony with the surrounding landscape”. The four interlinked movements flow seamlessly from dawn to dusk. The pastoral opening featured plaintive and lovely solos by oboist Liang Wang and cellist Carter Brey. The springing energy of morning segued into passionate brass depicting the Trevi Fountain at midday. Concertmaster Glenn Dicterow depicted dusk in a solo rendered in syrupy tone – perhaps too much sugar. This being his last season as leader prior to a move to the faculty at the University of Southern California, one can only wonder what changes are in store for the NYP’s string sound. 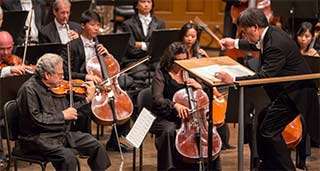 Five short violin pieces followed, alternating in mood. Having grown up with Itzhak Perlman’s recordings as the definitive versions of the violin repertory, it pains me to write that hearing him was an awful experience, perhaps likened to a beloved parent slip into dementia, with only fleeting glimpses of what once had been. 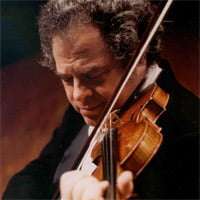 There were moments of greatness – his exquisitely smooth bowing, for one, and his unmistakable tone, so completely his own, consisting of the perfect blend of romantically inspired sweetness and modern brilliance. His innate musicality remains intact, and the slower works, the Massenet and the Williams, portrayed him at his best.

The Rimsky-Korsakov was a complete disaster. Perlman’s tone cracked on the opening high note, and his intonation was atrocious in the rapid arpeggios that followed. One hoped that this was a rare case of nerves, yet his intonation continued to be dreadful throughout, making one seriously consider the bizarre possibility that he was unaware of his technical limitations. His intonation improved in the Tchaikovsky, yet he continued to struggle with cracking of tone on the ‘E’ string. Sarasate’s Introduction and Tarantella was amateurish on behalf of both soloist and orchestra. Perlman missed too many notes in the Tarantella’s opening sautillé bowing to be excusable. His triple-stopped chords were harsh and crunchy, the perfect example of how not to play the violin. He took the piece at an extremely brisk pace, perhaps catching Gilbert off-guard at one point when the rudimentary orchestral accompaniment was noticeably out of sync.

The concluding piece, Pines of Rome, heavily featured the Philharmonic’s finest section, its brass. This work depicts the trees in four different Roman areas, again in four interlinked movements. The opening ‘Pines of Villa Borghese’ showcased the magnificent percussion and brass, with the strings displaying precision of technique but lacking the special magic of their colleagues. The dark ‘Catacomb’ began with warm lower strings in a pseudo-Gregorian chant, quickly building in intensity. Dicterow’s sweetened tone was nicely countered by principal violist Cynthia Phelps’s warmth, octaves below, in ‘Pines of Janiculum’. This movement also featured a recording of a nightingale, the very same recording specified by the composer to be played on a gramophone, an innovation at the time; this remarkably clean CD rendition managed to elicit several chuckles from the audience. The concluding section’s opening tritone ostinato managed to convey excitement instead of doom as Roman Legions appear from the mist. Keisuke Ikuma’s English horn solo was remarkable in its luxurious tone. The majestic ending, with triumphant brass playing in the balcony, had the string section step up to the plate and capture the music’s infectious energy.