Rafael Frühbeck de Burgos, the dean of Spanish conductors, turned 80 in September, but you wouldn’t know it from the energy and exuberance with which he led the New York Philharmonic here, and he conducted the whole concert without a score, eliciting playing that was not only precise, incisive and articulate, but also unwavering in dramatic tension.

The opening measures of Beethoven’s Eighth Symphony were so supercharged that it sounded as if the Philharmonic players couldn’t wait to begin. At first the musicians virtually spilled over each other, causing some inexactness, but quickly settled into a groove that they sustained thereafter. Although the boisterous, unabashed humor of the work is hardly a secret, many performances treat the Eighth as ‘Beethoven-lite’, toning down these characteristics to a caricature of the Classical symphony. Not Frühbeck. He played up the raucous humor with ear-splitting tuttis, forceful accents and unrelenting forward motion that gave each movement an extra measure of urgency. This insistence on overdriven tempos might have become taxing on both players and audience, but the frequent juxtaposition of thunderous outbursts and soft lyrical strains were handled with much finesse. The second movement, Allegretto scherzando, replacing a slow one, opened much louder than the marked pp, detracting from the light galant quality of the main theme, and undercutting the outrageous way it ends with a sudden booming shudder of hemidemisemiquavers. Reinforced sfortzandos gave the Minuet a bumpy quality, bringing out its parodistic character while serving to heighten the contrast between it and the dolce theme of the Trio, the latter enhanced by the sweet, songlike quality of the horn and clarinet solos, respectively played by Leelanee Sterrett (subbing for Philip Myers) and Stephen Williamson. Stentorian horns and trumpets reinforced the explosive ff passages of the finale, while bright, lively strings and perky woodwinds enhanced its vivacity. A rollicking conclusion capped a riveting performance. 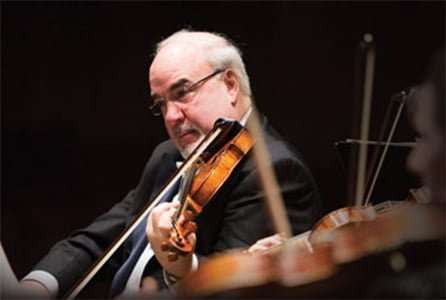 Richard Strauss’s Ein Heldenleben’s Carlylian hero-worship and idealized autobiographical aspects – which Norman Del Mar insists, “[bear] no resemblance to Strauss’s opinion of himself” – have drawn censure from some quarters, but critics get their comeuppance as the ‘antagonists’ in the work’s scenario, which treats them as less than worthy opponents of the Hero. And a solo violin portrays his companion, describing the composer’s wife, Pauline de Ahna, whom he described as “very complex, very feminine, a little perverse, a little coquettish and quixotic.” From the very opening, the Hero’s theme itself, an expression of his stalwart character, was played with radiant exuberance by horns and low strings. This stunning performance was consistently spirited but never excessively brisk; climaxes were as overwhelming as poetic passages were tender and caressing. Strings produced a lush, rich sound and woodwinds were crisp, clear and characterful. From the stentorian trumpet tattoos that open the Battle section to the clarion calls that bring it to an overwhelming climax, the brass deserves extra credit for such pulsating playing. In the many challenging violin solos, concertmaster Glenn Dicterow played with exquisite tone, agility and seasoned musical sensibility. His dialogue with Michael Gast’s horn (also in place of Myers) toward the end was a gift from Heaven! When the peace of ‘retirement’ is finally restored, a blissful calm settles over the music. The ascending diatonic chord that builds in the winds to the final outburst of E flat was simply magnificent. In all, this was a truly great performance.