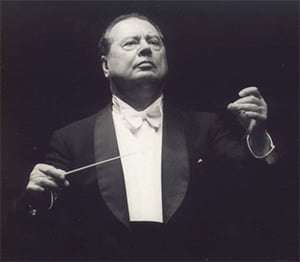 Rafael Frühbeck de Burgos has had a long and celebrated career including appearances as guest-conductor of the New York Philharmonic. Although soon to join the ranks of the octogenarians, he can still generate a head of steam while adding a light inflection to lyrical passages.

The concert began with a performance of ‘Serenata notturna’ that was all moderation and simplicity, yet Frühbeck did elicit a taut, elegant march to begin, and gave a fine example of the stile galante in the succeeding Minuet and Trio, made especially captivating in beautifully shaped phrasing. The two violins in the concertante quartet had both precision and intonation problems that continued in the finale, which was treated with dullish restraint and lack of enthusiasm until the final reprise of the main theme, which galloped along energetically.

Philip Myers, the Philharmonic’s principal horn, has been the mainstay of its excellent section for more than thirty years, and his prowess remains undiminished. In this stellar performance of the third of Mozart’s four horn concertos (which was written last), his purity of tone and perfect control were evident throughout. Myers played with refinement and grace in the middle-movement ‘Romance’, and his characterful yet unadorned treatment of the outer movements was enchanting.

Although Frühbeck is not widely known as a Mahler interpreter, he was awarded the Mahler medal by the Gustav Mahler International Society in 1996. Given this generally impressive performance of the First, it is unfortunate that we do not have his thoughts on Mahler’s symphonies recorded. Frühbeck’s way with the symphony combines aspects of a traditional approach (Bruno Walter) with some interesting, if not always effective, personal touches. Clarity of line and well-balanced inner-voices were important generic aspects of this performance. Frühbeck’s reading of the first movement was conservative and unaffected, giving its main theme a lilting, summery quality while not succumbing to a furiously rapid pace in the more energetic passages, and including careful treatment of Mahler’s directions.

Some might consider the tempo for the Ländler second-movement slightly tepid. Yet Mahler made it clear that that it should be played with strong motion (Kräftig bewegt) and not too fast (doch nicht zu schnell). Here Frühbeck emphasized the heavy-footed stomping of the peasant dance rather than propelling it forward. The trio section was graceful and airy, its charming lyricism enhanced by occasional hesitations, even if the ritardando before the trio’s reprise was exaggerated. To open the ‘funeral march’ third movement, the solo double bass player avoided the temptation to prettify his treatment of the ‘Frère Jacques’ round, so his slightly raw tone was in-keeping with the character Mahler wanted. Most impressive was the exquisitely shaped theme (taken from the final song of Mahler’s Lieder eines fahrenden Gesellen), which appears in the middle section.

After the crashing outburst that opens the finale, Frühbeck set a relatively moderate allegro tempo that still whipped up a raging storm. His flexible rendition of the romantic second subject was neither maudlin nor excessively mannered, ending with a moving expression of the passions of young love that Mahler may have intended. The horns deserve special praise for their outstanding performance; while occasionally over the top, they may be excused for being overly assertive, given how brilliantly they played. Although Frühbeck heeded the pesante marking that appears at the beginning of the passage principally titled ‘Triumphal’ – often ignored by conductors nowadays – he suddenly sped up thereafter, long before Mahler indicates that the tempo should no longer be as broad as before, and he kept pressing to the end. The final ‘snap’ (a pair of eighths on a falling octave) was played as if both notes were on downbeats, possibly to create a more demonstrative conclusion to this emphatic and occasionally impressive performance.