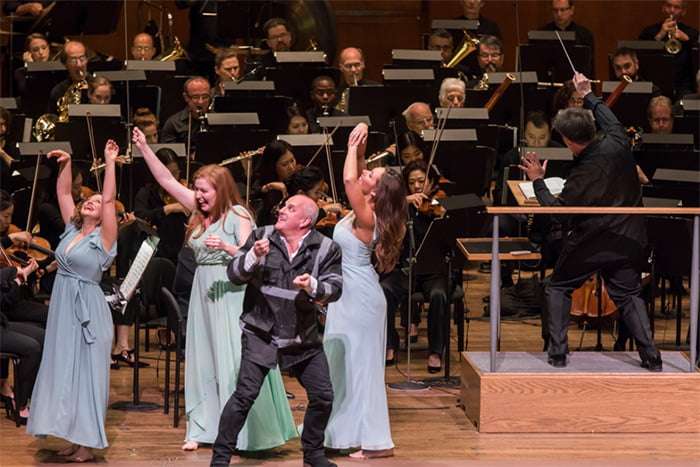 In this gripping account Gilbert drew excellent playing and was careful not to overpower the singers, with whom he maintained close rapport. Well-judged tempos kept the music surging forward, but allowed breathing room, such as the lovely passage between Alberich’s departure and the emergence of the ‘Golden Apples’ leitmotif that heralds the return of Freia and the Giants, and numerous harps depicting the ‘Rainbow Bridge’ after Donner’s hammer clears the air.

The cast sang and acted superbly, but the standout was Christopher Purves as Alberich, who captured the Nibelung’s changing moods as he evolved from frustrated wooer to pitiful captive via cruel overlord. There was real menace as he cursed the Ring that Wotan had just taken from his finger. Peter Bronder made much of his scene as Mime, his suffering at the hands of his brother Alberich convincingly painful. Russell Thomas was terrific as the wily Loge, and Eric Owens was a magisterial Wotan, eager to acquire the power of the Ring as well as his reluctance to surrender it. 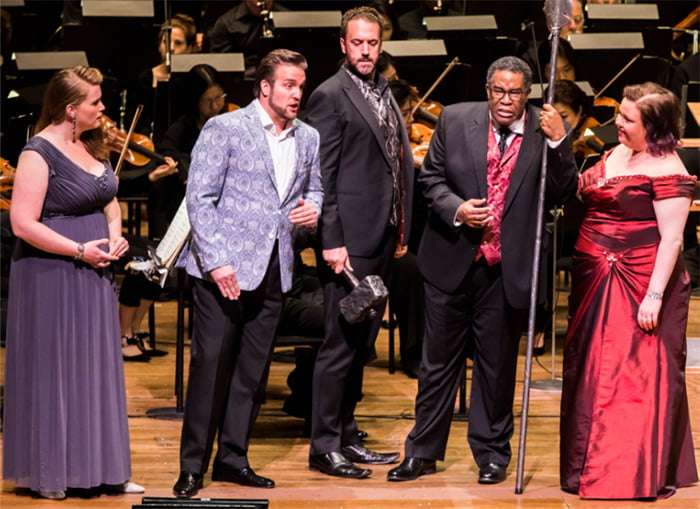 Jamie Barton’s portrayal of Fricka was marked by a lushness of tone and subtle acting that made her more than a nagging wife, and Rachel Willis-Sørensen was an appropriately sweet Freia. There were fine portrayals by Christian Van Horn as Donner and Brian Jagde as Froh, and a very effective rendering of Erda’s warning to Wotan by Kelley O’Connor. Morris Robinson and Stephen Milling as Fasolt and Fafner, respectively, were convincing Giants, their swaggering gait and bass voices making them formidable foes. The trio of Rhinemaidens was delightful as they taunted Alberich in the opening scene and added poignancy to the music-drama’s final moments.

Louisa Muller made a virtue of minimal trappings – a narrow performing area for the singers in front of the orchestra, and a few props (spear, hammer, rope and gold-dust), the latter sprinkled to represent the Rheingold and the Tarnhelm, inviting us to imagine, including Alberich’s invisibility and his transformations into dragon and toad, the pile of gold that obscures Freia, and the corpse of the murdered Fasolt.

David C. Woolard’s costumes effectively differentiated the singers, the Rhinemaidens in flowing dresses of aquatic tones, the giants menacing in long black-leather coats, and the Nibelungs in short jackets that set them apart as outcasts. Loge’s red blazer marked him as the god of fire and Wotan’s also-red garb matched Fricka’s satin gown, while Erda wore a slinky black number with a diamond pattern. Both Froh’s casual attire and Donner’s waistcoat, worn under a black jacket, complemented Freia’s pale-lavender outfit.