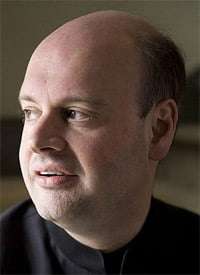 Even allowing that this beginning-early but late-starting concert was being broadcast on BBC Radio 3 (so the programme erroneously stated), it would have been preferable if Andrew Burn’s subjective spoken introductions from the platform had been exclusive to the broadcaster, for he was duplicating what he had written for the programme, which no doubt some of us had already read. This was the culmination of a “Day” of Nicholas Maw events at the Southbank Centre (in fact it was chamber music and talks in the afternoon). For this choral and orchestral concert he was presented on a pedestal inscribed “The Master”. No doubt Englishman Maw (1935-2009) was exactly that, but so are many other composers, however accessible (Maw’s ambition) or challenging and boundary-breaking (which like-minded listeners also savour) they may be.

The order of the concert was far from ideal, beginning, as many concerts do this day, ‘cold’ with a concerto. The ideal opener would be heard later in a programme that was itself too long and, with such exposure, found Maw’s music (at least these pieces) to be rather samey and too pre-occupied with beauty. His predilection for what might be termed as time and colour chords didn’t quite sustain the concert, not even the 40-minute Violin Concerto (1993, which has been previously thought a near-masterpiece, although it undoubtedly remains an impressive work). From the opening, when the violas soliloquise their intimacies, one is taken into a special world. One responds to the music’s romance and eloquence, to its rarefied suggestion, and to Maw’s vibrant use of a ‘classical’ orchestra that does without trombones but adds harp and contrabassoon.

Structurally the Violin Concerto is a pleasing mix of wonderment contrasted with the spiky and the capricious, such as in the Scherzo second movement; and the way that this latter movement transforms into the enchanted ‘Romanza’ is a stroke of genius. The finale, sometimes in too similar a groove to what has gone before, seemed to run out of steam on this occasion, although the work’s genuine sense of culmination is there to be appreciated. Written for Joshua Bell, who has given two previous London performances, Tasmin Little was visually wholly locked-in to reading the score in front of her, although the ear found her embracing the solo part with a focus and variegation that suggested something long-lived-with. Christopher Austin’s fluent conducting of a well-prepared City of London Sinfonia formed a notable partnership in music much indebted to Walton and Hindemith, and, to a lesser extent, Bartók. All masters, of course.

The concert’s second half tested the patience at times, for a lack of argument and emotional pull in the music did not necessarily sustain the gorgeousness and surfeit of the sound. The composer-made Suite from Sophie’s Choice (lasting 25 minutes to Burn’s stated 15) proved to be no advert for the opera itself, which was first heard in the Royal Opera House (Covent Garden) late in 2002. I was there on the first night and shared others’ reservations about the length of the work (over three-and-a-half hours of music, plus two intervals) and the excessive wordiness of the composer’s libretto based on William Styron’s eponymous novel. The Suite takes the opera’s prologue, epilogue and interludes to form a continuous sequence. Yes, accessible, involving, and written with immaculate craftsmanship, with the opening not seeming out of place to Debussy’s Pelléas et Mélisande (a wonderful model), yet over its course the Suite seems stuck in a particular expressive groove and even became inconsequential despite relating to terrible things: Sophie must decide “which of her children to doom to the gas chambers [at Auschwitz]”.

As for Hymnus (1996) for chorus and orchestra – setting Latin texts by Saint Ambrose and the prolific Anonymous (this particular verse from the 6th-century) – once again striking as sound and harmony with Maw’s ideals in place (one being to get audiences excited about “modern music” again). Who is to say that we weren’t, whatever “modern music” is? Mystical and ceremonial these two choral pieces are, yet the words are repeated to purposes of aggrandisement – the poems’ 40 lines take more than thirty minutes to work through. There are some wonderfully vivid and radiant passages, but not enough for the whole. Holst and Tippett, recalled in these settings, were more personal and succinct.

Stephen Layton directed with belief, and the gem of the evening was the a cappellaOne foot in Eden Still, I Stand – a varied and arresting seven-minute setting of Edwin Muir, perfectly blended, if not served here by being sandwiched between Sophie and Hymnus; what a great start this Muir-inspired piece would have made to the concert. The performances were excellent, but one is left with a question mark hovering over Maw’s achievements. It may now be time to once again experience his 100-minute orchestral Odyssey.