Best of Friends
A musical with book, music & lyrics by Nick Fogarty 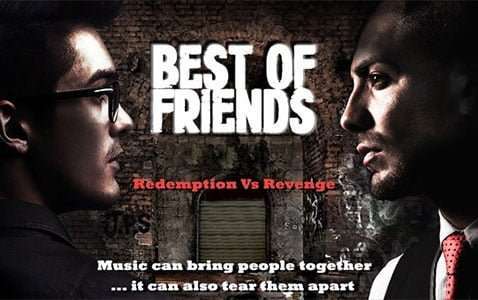 Best of Friends at the enterprising Landor Theatre has already become somewhat notorious for its remarkable history, culminating in a prominent news item in the Evening Standard headlined “West End Musical hit by £1m fraud gets cut price revival”. “Revival” is not accurate, for the show has never been performed until now. Originally titled The Golden Voice, it was scheduled to open last summer at the Arts Theatre near Leicester Square with Darren Day heading a large cast. The show’s creator, Nick Fogarty has extensively re-worked the piece, reducing the cast to seven, all of whom were paid in advance, unlike the earlier company members who were repeatedly promised payment that never materialised. The tax lawyer handling the million-pound-plus funds was later arrested and he is now on bail. Fogarty lost his life savings but was determined not to let eight years of work go to waste and has adapted the show into the modest work now presented.

Best of Friends refers to Mike and Jim who have created a rock club and formed a group that has had some modest success. When the charismatic Mike wins a top-rated talent show it causes a rift between the pair. He also splits with his girl Natalie – “temporarily”, he insists, but necessary so that his fans perceive him as romantically unattached. He breaks this to her just as she’s about to tell him she’s pregnant. She keeps silent. Mike has four hit singles before he walks out on his career. Most of the show takes place twenty years later, when Mike returns with new dreams and involving Jim. He hasn’t forgotten Natalie, although he has no idea that she’s been raising his son, in Canterbury. Meanwhile, Jim has become a leading figure in the underworld and harbours sinister revenge on his former buddy.

Possibly because of the paring-down to which Best of Friends has been subjected, the book seems surprisingly under-nourished. One can accept the fact that no-one seems to have aged – Hollywood musicals used to do that all the time – but characterisation is thin. Jim’s reference to his cocaine factory comes out of the blue, and important revelations are muffed – Mike’s son Taylor takes about a minute to adjust to the news of his parentage (having been brought up believing his father was dead), and the moment when Mike, who has taken Taylor as a protégé, discovers that the youth is his son, happens off-stage!

The result swiftly moves along, though, with the emphasis on the plentiful music, and, if the songs are occasionally repetitive with suspect rhyming and quivering rock/soul melodies, well that is the music of the era depicted. (Fogarty has written several pop singles.) The show benefits too from the energetic and imaginative staging by Robert McWhir and the talents of a grand cast. Fogarty plays Jim and, if he is the weakest cast member in the early part of the show, he later displays some convincing Jason Statham-style villainy. In the Darren Day part of Mike, Aidan O’Neill has the requisite star quality, with dashing looks complementing top-rate acting and singing. Natalie is played by Rosie Glossop, who has an impressive country-style solo and duets with O’Neill on two of the show’s catchiest numbers. Alex James Ellison brings an aptly ingenuous freshness to his portrayal of Mike’s son, and major support is provided by Serena Giacomini, Sarah Goggin and Dean Kilford. Lighting designer Richard Lambert and video designer Maximilien Spielbichier are presumably responsible for the monitors that add immediacy to the smartly-paced proceedings.