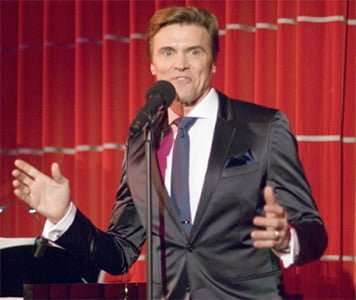 For over thirty years, the tall, dark and handsome Brent Barrett has been one of the finest baritones to be heard in musical comedy. He made his Broadway debut in 1980 when asked by Jerome Robbins to take over the role of Diesel in a revival of West Side Story, and for the last three months of the run he played the leading role of Tony. He has since played leads in musicals worldwide, and in 1992 he starred as the self-styled Baron in the lauded London premiere of Grand Hotel. Nine years later, he won an Olivier nomination for his portrayal of Fred in a revival of Kiss Me, Kate.

At last Barrett’s busy schedule allows him to appear at The Crazy Coqs – he comes straight from starring in Chicago in Dubai – and how welcome he is. It is rare these days to hear such seductively powerful a voice allied to an inherent sense of drama. Roles for such singers are not being written too often, though Barrett has been much in demand for Annie Get Your Gun, Candide, On a Clear Day You Can See Forever, Anything Goes and The Pajama Game.

For his cabaret debut in London, he performs a programme entitled Night Songs, a cleverly devised selection of nocturnal numbers and the romantic possibilities evoked. He includes some perennial favourites, such as Bernstein and Sondheim’s ‘Tonight’ and Burke and Van Heusen’s ‘Moonlight becomes you’, plus less familiar numbers such as the appropriately titled ‘Night song’, a moody ballad written by Charles Strouse and Lee Adams for Sammy Davis Jr. to sing in the musical Golden Boy. He has fun with Hoagy Carmichael and Johnny Mercer’s ‘In the cool, cool, cool of the evening’, and adds an extra spark to Arthur Schwartz and Howard Dietz’s gorgeous ‘You and the night and the music’ by singing a chorus in Spanish.

A triple-bill of numbers anticipating romantic liaisons at respectively seven, eight and nine o’clock, is an engaging conceit as well as featuring three neglected songs. ‘Every night at seven’ by Burton Lane and Alan Jay Lerner was introduced by Fred Astaire in the film Royal Wedding, ‘Tonight at Eight’, its sense of urgency enhanced by Barrett’s acting the song as well as singing it, is by Sheldon Harnick and Jerry Bock from their show She Loves Me, and Bob Merrill’s ‘Nine o’clock’ was sung by Robert Morse in the show Take Me Along. More obscure than these numbers, though, and a highlight, is a true discovery, a song by Jule Styne (with lyrics by Harold Adamson) that was first sung by a (dubbed) Gail Patrick in the film Hit Parade of 1943. A perky ditty, ‘Who took me home last night?’, has lyrics that are somewhat risqué for the time (“Was it an envoy or was it a convoy?”) and Barry Kleinbort has added some extra words that make it a joy.

Barrett’s linking chat, which reminiscences of his early days in New York (and a brief traumatic fling with drugs) is consistently amusing, and he acknowledges the contributions made to his act by Christopher Dennis. Barrett appeared in a Las Vegas production of The Phantom of the Opera, so ‘Music of the night’ is perhaps a predictable choice. His other numbers include Jimmy Webb’s ‘The moon’s a harsh mistress’, Billy Joel’s ‘River of dreams’, and Diane Warren’s ‘Rhythm of the night’, the last inspiring some spirited disco-dancing from Barrett. He is in fine voice throughout, especially in his superb account of Rodgers & Hammerstein’s ‘Some enchanted evening’. His mellow range could not be further from the rich bass of the original singer, Ezio Pinza, but it is equally affecting, as Barrett builds to an emotional climax. “How can you follow R & H?”, he asks, but he does with two songs which break from the ‘night’ theme, the lovely ‘Never never land’ (Styne, with Betty Comden & Adolph Green), and ‘Come back to me’ by Burton Lane and Alan Jay Lerner. Barrett gives it uncommon urgency, and he sings several seldom-heard choruses with unparalleled fire and conviction. Come back soon!