Ballet galas remind somewhat of international scout jamborees – a jolly good time is had by mostly all with representatives from different countries bringing their own particularities to a general get-together. In the ballet world, they offer dancers the opportunity to travel a bit, to see perform-artists from other companies and traditions, and for audiences to see the art form in a different way from the usual full-length or mixed-bill approach. By definition, they will be uneven both in terms of the quality of choreography and its performance, but Ensemble Productions is to be lauded that, in such financially straightened times, it assembled an impressive list of performers for a gala programme whose ostensible raison d’être was the celebration of the great dancer Vaslav Nijinsky.

All praise at the outset for English National Ballet’s Orchestra: an alert, engaged ensemble that gives its all to music for dance, unlike some other, perhaps more illustrious, orchestras. It deserves all praise for switching between music in almost every genre possible, and doing so with such sweetness of tone and passion; Valeri Ovsyanikov brought his musical intelligence to the fore as conductor. Praise, too, for Wayne Eagling (the Artistic Director of the evening) who, without any doubt, succeeded in stitching together a satisfyingly programmed evening in very little time. 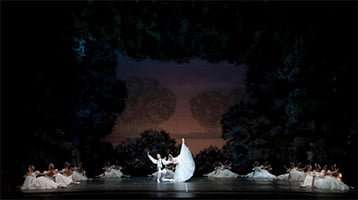 That programming must have been difficult, because what remains of Nijinsky is little more than one extant example of his choreography (L’Après-midi d’un faune), several created roles which have now evolved far from what he initially performed, contemporary accounts and a series of evocative photographs. Indeed, it may have been a mistake to project some of the latter during performances by contemporary dancers – the fascination lay more often than not in the still images. Additionally, those works which have roles created by the great dancer (Petrushka, Les Sylphides, Scheherazade, Le Spectre de la Rose) are not, with the exception of the last, works from which ‘bleeding chunks’ can be torn, so much do they rely on the creation of atmosphere and mood. The result was that those excerpts which were performed in this gala fell alarmingly flat, even the pas de deux from Les Sylphides disastrously shorn of the evocative scent of Romanticism becoming simply two dancers dancing prettily in pretty costumes.

Two ‘evocations’ of Nijinsky suffered different fates. Wayne Eagling’s vision of Jeux, Nijinsky’s poème dansé to Debussy, using Kenneth MacMillan’s moves made for the film Nijinsky, was a clever, witty work when premiered as part of English National Ballet’s Beyond the Ballets Russes season last year, and the trio from it that was performed here was welcome, evocative of both period and images from the great dancer’s own portfolio of now famous poses. Maria Grazia Garofolui’s Narcissus was not fit for purpose as a gala piece, nor indeed as a dance piece. Fatally wounded from the off by exploring the legend of Narcissus (a Nijinsky role) to the music of L’Après-midi d’un faune in front of a backcloth onto which images of Nijinsky as the Faune were projected , this lamentably bad solo-then-pas-de-deux limped along, possessing a car-crash fascination all its own. Poor Giuseppe Picone donned the skimpy loincloth and danced a great deal with a stick for no apparent reason, only to be interrupted by the comings and goings of a veiled danseuse looking for all the world like an extra from Scheherazade (am I on yet? Oh no! Better run off again). She finally returned skimpily dressed to engage in a session of tedious grappling with Piccone only to depart once more, leaving him bereft. It meant nothing and was lacking in what could be loosely termed choreography.

It was an irony that there were several pas de deux in the evening displaying the sort of empty bravura from which Nijinsky et al were fleeing when they left the Imperial Ballet to join Diaghilev’s Ballets Russes. The duet from La Fille du Pharaön was dutifully done, a piece of reconstructed Petipa with a few turns and fouettés seemingly thrown in for good measure. Of more interest was the Soviet era Moskowski Waltz, an unashamedly enjoyable pas de deux danced with smiling aplomb but now far too balleticised and safe when you compare footage of the great Olga Lepeshinskaya and Pyotr Gusev in 1940. Best in breed was Balanchine’s Tchaikovsky pas de deux, here given by Royal Danish ballet dancers J’aime Crandall and Alban Lendorf. Crandall, an American in Copenhagen, danced sweetly enough but showed a poor musicality; Lendorf is an exciting young dancer, full of bounce and verve, unafraid of the challenges set here and displaying proudly his Danish training with neat footwork, careful placement and impressive ballon. His costume (a jerkin in crushed raspberry) was most unflattering.

I very much enjoyed the pas de deux from Balanchine’s Diamonds with the delightful Evgenia Obraztsova, here partnered by the newly promoted Artem Ovcharenko both from the Maryinsky Ballet. While Obraztsova is not quite ideal casting for this role (she is wondrous in Emeralds), she brought her immense artistry and pure-bred Maryinsky style into play, displaying a fine use of arms and shoulders and unerring musicality – a true ballerina. Ovcharenko displayed princely line and moves in pure Saint Petersburg fashion; he certainly promises much.

There were three contributions from the ‘home team’ of The Royal Ballet, the least impressive of which was a bloodless account of Kenneth MacMillan’s Farewell pas de deux from Winter Dreams. Husband-and-wife couple Soares and Nuñez were too overtly ‘balletic’ in this, detracting from the emotional veracity that the choreographer sought. It was pretty enough, but did not move in the way that it can. The two others were, strangely, closer to Nijinsky’s own quest for the new and for new ways of dancing. Kim Brandstrup’s Rushes, set to fragments of Prokoviev film music was a brave and ultimately successful decision by Cojocaru and Whitehead to perform a pas de deux from it. It is introverted, brooding, mysterious – hardly gala fare – but possesses an intensity and a ‘reason’ which made it absolutely the right choice. It was performed impeccably.

The loudest cheer of the evening came for Leanne Benjamin and Edward Watson in a pas de deux from Wayne McGregor’s Qualia, a slightly more accessible and satisfying work than some of his subsequent offerings. McGregor’s dislocations and extremities of movement made absolute sense in an event designed to celebrate the genius of the innovative creator of L’Après-midi d’un faune and Le Sacre du primtemps. Benjamin and Watson remain two true jewels of the Royal Ballet’s slightly wonky crown of principal dancers and they delivered this punishing duet with ultimate control and requisite intensity. A glorious contribution indeed.