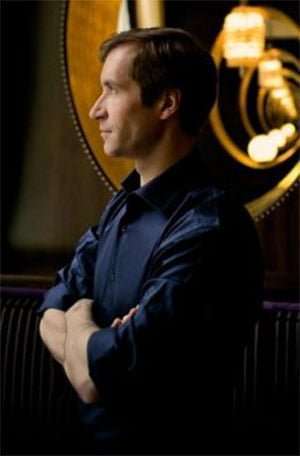 There are some wonderful pianists around, and then there is the great Lugansky. There’s something god-like about Nikolai Lugansky’s playing, in which intelligence and intuition go hand in hand with a ferocious yet civilising passion. In past concerts, some of these elements get out of synch, which can result in his phenomenal control sounding a bit forensic, but in this recital all the ley lines were in coalition.

César Franck’s Prelude, Chorale and Fugue used to feature much more frequently in programmes than it does now, because, I like to think, Franck’s brand of lofty pietism was seen as a corrective to the perceived flummery of Liszt’s religiosity, as refracted through the prism of Bach. Lugansky kept the Prelude’s chromaticism simmering rather than seething – it’s very easy for its anxious yearnings to spread like bind-weed, easily clambering over the form-defining appearances of Franck’s idée fixe – and the delicacy with which he introduced the Chorale was a lesson in self-effacing authority. In a work that, for all its virtuosic pianism, keeps a finger or two in the organ-loft, Lugansky found a dark palate of sound evoking the whiff of incense.

This seriousness of purpose leaked into Prokofiev’s Fourth Piano Sonata, re-worked from music he wrote as a teenager. Lugansky’s compassionate detachment paid huge dividends in the first two movements, which came freighted with a Shostakovich-like desolation. His firm tiller on the first movement’s distraction and the second’s accruing sense of dread was mesmerising. Clarity of texture and lightness of pedal, the quiet perseverance of a mid-register melody in the second movement and the subliminal growth of rhythmic definition in the first – Lugansky could twist all these layers of potential meaning round his little finger. But he is not Russian for nothing, and he made the eruption into the finale suitably drastic and grotesque, played with explosive panache.

Prokofiev wrote this awkward Sonata around the time (1917) of his Visions fugitives, a title that could well apply to Rachmaninov’s Preludes, Opus 32, in which Lugansky surpassed even his prodigious musicianship in recreating the elusive spirit of spontaneity in which the 13 pieces were composed at the same time as endowing them with an organic connectivity. Lugansky’s powering virtuosity was quite something in the muscular élan he showed, but even in all the bravado you could hear him homing in on Rachmaninov’s lyricism and abiding melancholy, which were given overwhelming expression in the two longest Preludes. You could almost see Lugansky shifting his position from sympathetic observation to emotional experience for those revelatory flashes where composer and performer inhabit each other. The virile drive of No.3 – an exuberant celebration of bells and Bach, with effortless fortissimos still resounding – was complemented by magically controlled suspension of time in the consolatory and veiled tone of No.5, easily matched later in the huge distance Lugansky evoked in his delivery of the left-hand melody of the penultimate Prelude. His manipulation of types of staccato in No.4 gave you a clue as to the reservoir of detail he has at his disposal, and the supercharged lyricism and velocity of 8 and 9 were transcendentally virtuosic. He also had a keen awareness of the way in which the endings to each Prelude confer a stature on those that refuse to be miniatures, an insight he took to its logical conclusion in his glorious reading of the final one, an apotheosis and summation that confirmed Lugansky’s transforming identification with this astonishing work. It was a staggering achievement.

The poetry continued with his three encores, a Mendelssohn Song without Words (Opus 85/6), followed by a delirious, fast and witty performance of Chopin’s F major Study (Opus 10/8 (the build-up to the return of the opening every bit as tense as the same moment in Widor’s ‘Toccata’), and on to entirely memorable charm in Medtner’s ‘Canzona Serenata’ (the sixth of his Opus 38 set of Forgotten Melodies).