Ace of Clubs
A musical comedy with book, music & lyrics by Noël Coward 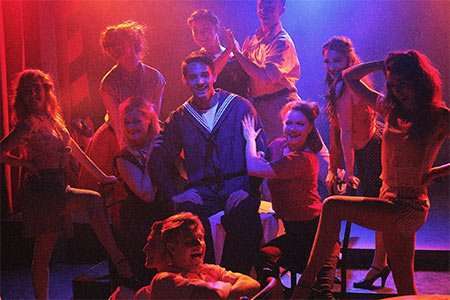 The Union Theatre is one of London’s most distinguished fringe venues, particularly noted for its courageous staging of obscure musicals, so it is sad when one of its ventures fails quite as drastically as Ace of Clubs. The show was first produced at the Cambridge Theatre in 1950, and was the creation of Noël Coward, who wrote the book, the lyrics and the music. There was booing during the first-night curtain calls, and reviews were not good, but that knowledge did not deter me too much – with a talent like Coward’s it could not be all bad – and at least one of its songs, ‘Sail away’, has taken its place among the greatest of his compositions. The show’s milieu, however, was not a comfortable one for Coward, though his memoirs show him to have been enthusiastic about the project. He decided to set the show in a seedy Soho nightclub, where the action alternates between the floorshow and some melodramatic gangster activities involving jewel thieves and blackmailers which forms a backdrop for the romance of a sailor, who rescues Pinkie, the cabaret star, when there is a brawl, earning him her love and the hatred of the crooks.

Turning the Union Theatre into a virtual nightclub is a good idea, though it results in some problematic sightlines, but a major problem becomes evident as Pinkie (Emma Harris) launches into her first solo, ‘My kind of man.’ Having handled her dialogue with aplomb it is a shock when her singing disappears into the ether, being totally inaudible. (In case there was a problem the night I went I checked with a friend who had seen the show three nights earlier and he had the same experience.) Harry the sailor is played by Gary Wood, who was impressive as Paul in the recent revival of A Chorus Line, and he performs a sprightly dance to ‘Something about a sailor’ but lacks the power to give ‘Sail away’ the bracing attack it requires. 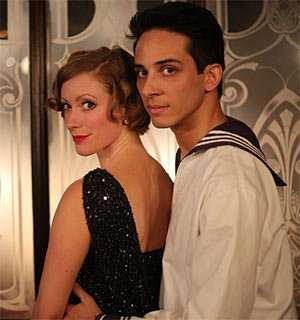 Another of his songs, ‘I like America’, which Coward later used in his cabaret show, sounds too sophisticated for his character (something that was debated in 1950). The deliberately tacky floorshow routines led by Baby Belgrave (Lucy May Barker) give a chuckle, especially ‘Would you like to stick a pin in my balloon?’, but the manic choreography does not serve well – it blunts the impact of what should be a showstopper, ‘Three juvenile delinquents’. Strangely, the ‘eleven o’clock’ number, the frisky and risqué ‘Chase me, Charlie’ – which originally Pat Kirkwood as Pinkie sang as a schoolgirl carrying a toy kitten, and which was then given a new lease of life when Mel Tormé made it a part of his act – has been given to Barker and the girls, and has little impact.

The club’s MC (Michael Hobbs) is amusingly camp, but he is ill-served by Coward, whose ideas of spiv dialogue rehashes comic-book clichés, Dick Barton-style. Kate Milner Evans is touching as a spurned older woman, and the object of her affection, club manager Benny (Patrick Neyman), makes an impact, if only because you can hear every word he utters. Evans and Neyman share the show’s high-spot, Evans with the plaintive ‘Evening in Summer’ and Newman ‘Nothing can last forever’ as a countermelody. All too briefly, one is reminded of that touch of magic that can be provided by musical comedy at its best.