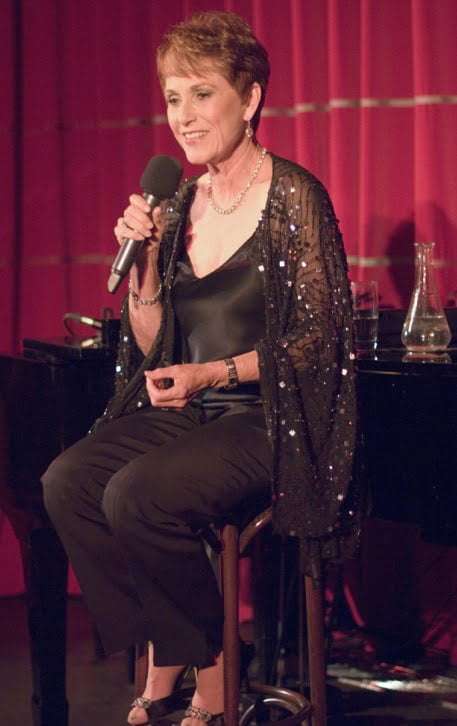 A warm welcome once again to Amanda McBroom, the singer and songwriter making her third appearance at The Crazy Coqs cabaret room. Always a pleasure to see and hear, she has brought a largely new programme titled Noir, a word that conjures up a genre of film and literature prevalent in the 1940s particularly, evoking a world of rain-swept pavements, neon nights and voluptuous, generally deceitful ladies. McBroom tells us we will be entering a world of “sexy songs and trashy women”, which sounds like a lot of fun … and it is.

McBroom’s first song is an indication of the pleasures to come as she caresses a number written by Jerome J. Leshay and Bobby Troup, first introduced by Troup’s wife, Julie London. ‘Nice girls don’t stay for breakfast’ has a great punch-line, and is followed by ‘C’est noir’, written specially by McBroom and Michele Brourman. It includes advice to “Put your lips together and blow”, which Lauren Bacall so memorably gave to Humphrey Bogart in To Have and Have Not (1944), which featured composer Hoagy Carmichael, so I was disappointed that McBroom missed the opportunity to sing the neglected number by him and Johnny Mercer, ‘How little we know’, but a bluesy account of Carmichael’s ‘Baltimore Oriole’ was ample compensation, and included a fine piano solo from Brourman.

McBroom tells that her ‘Lady has the blues’, was inspired by Barbara Stanwyck’s powerful performance as a fisherman’s wife who falls for a brutish projectionist in Fritz Lang’s Clash By Night (1952). She describes ‘Beautiful Mistake’ – co-written with John Bucchino (“We fell in love too soon or met too late”) as “the most noirish song I ever wrote” – and Michael Smith’s eerie ‘Demon lover’ with its warning about past affections, both neatly lead to Johnny Mercer and Harold Arlen’s timeless ‘That old black magic’. Mercer also put the lyrics to David Raksin’s rapturous title-music for the film-classic Laura (1944) beautifully rendered by McBroom, whose voice is better than ever – warm, voluptuous and effortless, and she displays a sharp sense of humour on such numbers as Carol Hall’s wry ‘It’s only a broken heart’ (“It’s not like you’ve lost your dog”). ‘The bitch is out’ is one of McBroom’s deliciously naughty lyrics, to music by Joel Silberman, and she includes several more ditties written with Brourman, including those written for a Shakespearean musical which features an unusually sympathetic Gertrude.

The evening ends with several showstoppers – including Jacques Brel’s ‘Carousel’, with its fiendishly difficult whirlwind pace, the heartbreaking ‘Errol Flynn’, the title-song that McBroom wrote for the Bette Midler film, The Rose, and something that is on everybody’s list of favourites, ‘As time goes by’. McBroom includes the rarely heard verse of this number, written in 1931 and rescued from obscurity in Casablanca (1942). McBroom is a supreme cabaret performer who can certainly ‘play it again’ for our immense pleasure.