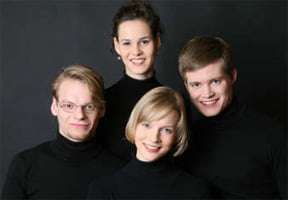 Founded in 2007, the Frankfurt-based Notos Piano Quartet won this year’s Parkhouse Award, given in memory of the distinguished English pianist David Parkhouse. The group is nicely balanced both aurally and visually, with a man on each wing framing the two ladies on piano and viola at the centre. Antonia Köster is a marvellously neat and adroit player and the strings blend well, with excellent violin tone, tangy viola and firm, focused cello. These young players have a lot going for them, and any criticism I have is mitigated by my conviction that if they can stay together they will soon challenge any of the established groups.

Their Mozart was almost too neat and passed by agreeably without leaving a very durable impression, although I was delighted to note a few tasteful decorations in repeated phrases. Granted that the E flat Piano Quartet does not have the poignant undertow of the G minor, it can still affect the spirit more than this performance did.

The group’s biography speaks of “Notos, the personification of the south wind, sometimes a gentle breeze, sometimes the bringer of storms.” I must confess that I know little about the South Wind – and it is years since I read Norman Douglas’s celebrated novel – but I did notice that two of the tempos in the Schumann went like the wind. Frankly, this is a problem work. While I accept Malcolm MacDonald’s contention that in some respects it is subtler and more masterly than the Piano Quintet, it does not have the overall perfection of that masterpiece. Each time I hear it, I feel that Schumann’s feeling for balance and proportion was skewed by his desire to please his dedicatee, the amateur cellist Count Mathieu Wielhorski. He also threw Wielhorski a nasty curve ball, demanding that he re-tune his C string down to B flat at the end of the slow movement – this scordatura was unobtrusively achieved by Florian Streich. It was a youthful performance, and there is nothing wrong in that. But I was not quite convinced by the fervour of the opening movement, and I did wonder why the scherzo had to go quite so fast, thereby laying stress on precision rather than expression. The Andante cantabile went well enough, the cello solos nicely played and the viola’s especially lovely, but the basic tempo of the finale was too fast. The players inevitably had to relax from it, which only emphasised its manic quality. This interpretation needs to mature.

William Walton’s early Piano Quartet was written in 1918 and 1919 and was apparently inspired by Herbert Howells’s lovely work of 1916, but Walton tinkered with it obsessively, revising it in 1921, 1955 and 1975. The first movement never quite works, but it is fascinating – and pleasurable – to hear Walton writing in the modal idiom of Howells and Vaughan Williams. The writing for the viola is splendid, especially in the Andante tranquillo, where the strings are muted. There is also a muted viola solo in the finale. Liisa Randalu really shone in these passages. The musicians did their best with the Allegramente, caught the spirit of the Allegro scherzando, saved their loveliest playing for the Andante tranquillo and blazed away in the finale.

At Parkhouse Award concerts that wonderful cellist Eileen Croxford, David Parkhouse’s widow, is always much in evidence. The violist Christopher Wellington, who used to play with the Parkhouses in the Music Group of London, was also present, providing another link with a memorable era of chamber music. That we can constantly renew the spirit of this most-intimate form of music-making is due to the encouragement offered to young artists by such awards. In straitened times we need chamber music more than ever, I would say.