Borodin
Prince Igor – opera in a Prologue and two Acts to a libretto adapted by the composer with Vladimir Stasov from the East Slavic epic The Tale of Igor’s Campaign, with orchestrations and reconstructions by Alexander Glazunov and Nikolai Rimsky-Korsakov [sung in Russian with English surtitles; UK premiere of this performing version by Yuri Alexandrov] 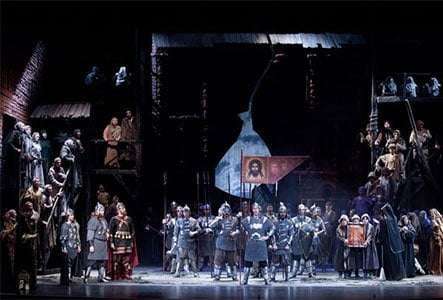 2014 is special in UK-Russian relations, a “Year of Culture” by Secretary of State for Foreign and Commonwealth Affairs, William Hague MP, and the Minister of Foreign Affairs of the Russian Federation, Sergey Lavrov; a joint statement was signed on 13 March 2013. This visit by the Kolobov Novaya Opera Theatre of Moscow is welcome, as is its presentation of Alexander Borodin’s epic Prince Igor. It is though regrettable that its visit is the only native Russian opera-company to come to the UK for 2014; the Mariinsky’s summer visit to the Royal Opera House (under the auspices of Victor Hochhauser) is, once again, a ballet-only affair. 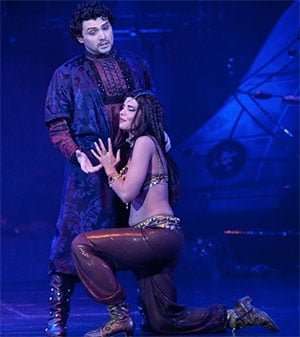 The issue of performing edition hangs over a staging of Prince Igor. It took Borodin (1833-87) – a full-time research organic chemist (and a good one at that!) and part-time composer – eighteen years to write, yet it was left incomplete at his early death, with Alexander Glazunov (1865-1936) and Nikolai Rimsky-Korsakov (1844-1908) cobbling together the manuscript, orchestrating large sections, and composing others, so as to produce something that could be made performable. Indeed, Glazunov faithfully wrote the Overture (only half of which is heard in this present version, and then after the Prologue!) from memory having heard Borodin play it to him on the piano, and most of what became Act Three in the Glazunov/Rimsky edition was orchestrated by the former. Otherwise it is Rimsky that takes much credit.

All the programme booklet states is that the version heard here is “the Novaya Opera production of Prince Igor based on the Glazunov–Rimsky-Korsakov version as staged by Yuri Alexandrov”. This is misleading. Running at about 140 minutes of music, here is approximately what is presented: we open with the Prologue and then that bastardised Overture, followed by Act One/Scene 1 in G & R-K’s scheme (the princely court of Vladimir Galitsky in Putivl), then there is an interval. G & R-K’s Act One/Scene 2 (a room in Yaroslavna’s palace) opens Alexandrov’s Act Two, followed by G & R-K’s Act Two, which concludes with the Polovtsian Dances. Act Three is essentially removed (Rimsky’s numbers are cut), and this leads into a truncated Act Four (the city wall in the ruins of Putivl at dawn) to conclude things. 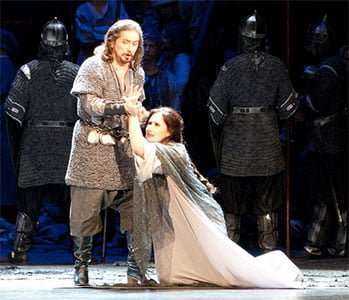 Whatever the justifications, in this staging with this production team it does not work, and has turned the opera into a piece of hooey in the style of Kismet! My jaw dropped at the sight of big Russian girls with even bigger exposed cleavage (the Khan’s daughter), whether or not they were rolling around with their men, straddling them. Similarly the Chorus has to be doing something all the time – just stand still! The hunchbacked nuns that pestered Yaroslavna are laughably conceived, as is the risible choreography for the Polovtsian Dances: there is even one young nubile thing rolled out from a carpet… Please! The acting leaves a lot to be desired, too. I swear I caught Popovskaya (Igor’s wife) cast a wry smile towards the end when, after her lament for her lost Prince Igor and then his sudden appearance, she asks how he escaped: of course, no-one knows (Act Three is not performed) and all Igor says is that he fled in secret, and she nods acceptingly! It is so – and unintentionally – funny!

In the mix of this nonsense was some decent singing and orchestral playing. Sergey Artamonov gave an Igor of commanding presence; very much the warrior-prince touched by defeat and made to discover inner resolve. As his wife, Popovskaya made Yaroslavna a quite sympathetic character, and the two together provided the evening’s only decent duet, a lovely mix of compassion and tenderness. It was a pity that her lament (oh woe, this edition is more lament than action) was marred by noisy talking from stage-hands. Yaroslavna’s brother, Prince of Galich, was given with robust Russian bass sounds, and similarly emphatic was Agunda Kulaeva as the Khan’s daughter Konchakovna: a mezzo as hearty as a good broth. Vladimir Kudashev as the Polovtsian Khan himself, Konchak, made a good impression, with a hint of legerdemain adding to the frisson between him and the captured Igor. Aleksey Tatarintsev made much of Vladimir Igorevich (Igor’s son), and his tenor was always pleasing to hear. 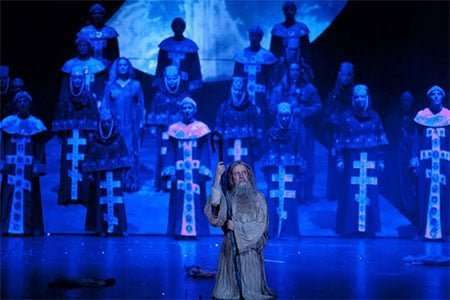 Considering all of this, it is sometimes evident of what Alexandrov wants from this opera: Igor is presented as a Messianic figure, with victory found in his defeat – he even looks a bit like Christ. But the journey to this is simply unconvincing, the opera’s dramatic narrative sacrificed for set-pieces. The closing scene, the best of this version of the opera, has the Chorus sing gently after Igor’s repentance. The Orchestra, under Jan Latham-Koenig, presented a decent reading of the score, at times wonderfully translucent, and otherwise appropriately vigorously strident. But this is detracted from by some crass staging and direction.