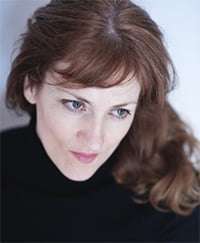 The Orchestra of the Age of Enlightenment marked International Women’s Day, and the start of Southbank Centre’s Women of the World Festival, with a concert given the rather camp title “Queens, Heroines and Ladykillers: Curtain Raisers and High Drama”. Women were at the helm, at the soloist’s stand and the conductor’s podium. Emma Bell depicted the queens and heroines in question via a quick costume change: red silk for Mozart’s vixen, Elettra, in an aria of spitting rage; a black lace trouser suit for Beethoven’s feisty heroine, Leonore; and back to red for a rarely-performed aria, ‘Ocean! Thou mighty Monster’, from the opera that killed Weber, an English-language setting of a German story that conflates the tale of mortal lovers Reiza and Huonwith to that of the fairies Titania and Oberon. Oberon premiered at Covent Garden two months before the composer’s death in 1826. With this in mind, the exuberant joy of the aria, particularly the Rossini-esque final section, comes as a surprise. The OAE and Bell brought a delightful sense of fun and vocal pyrotechnics to Rieza’s melodramatic declarations.

The OAE explored the heavy, dramatic style of aria that developed out of opera seria, marking the changes as Mozart’s lyrical classicism becomes in turn Beethoven’s softness and his petulant restlessness, and later Weber’s showmanship. The arias by Mozart and Beethoven mirrored each other: Elettra grows increasingly agitated recalling her humiliating rejection, whereas Leonore’s initial tantrum dissipates as she remembers that soon she will see her husband again. Rieza’s oratorio-like poem to the sea completed the transformation: it is a massive showpiece of a scene that Bell enjoyed, beaming and scowling as she raced up and down the full range of her voice.

Just as interesting was the opportunity offered to contrast Mozart’s demure Overture to Idomeneo with Leonore Overture No.3, the third of four attempts Beethoven made at an overture for his opera. It never made it into the final score, and the very name of the opera was changed. It is the most popular in the concert hall, as it is the most satisfying when heard alone. After a hushed opening, the main theme bursts out with unexpected jollity. It is a boisterous folk-song of a theme – syncopated, sunny, a rip-roaring barn dance, and although Beethoven takes the orchestra through some darker tonalities, the optimism of the theme is contagious. The playing of the OAE was inconsistent at the start, lacking intensity in the inward-gazing opening bars, but made up for this in the climax, which was thrilling.

The concert was completed by Robert Schumann’s Second Symphony, included, Marin Alsop explained at length, as a tribute to the woman who lay behind it: Clara Schumann. It was Clara who was eventually able to convince her husband that he ought to compose symphonies. Towards the end of the work is a reference to Beethoven’s song-cycle An die ferne Geliebte, returning throughout to contrapuntal devices in homage to Bach. Schumann wrote afterwards that he found solace in counterpoint during times of grave depression. After a first movement that is at times wistful, and was played here with delicate grace, the symphony becomes a glorious fiery beast, via a glorious Adagio. The OAE stepped up its game considerably and gave a dazzling performance.