Orchestra of the Age of Enlightenment
Semyon Bychkov

They met for the first time a few days ago, a concert at The Anvil in Basingstoke, this same programme. The Royal Festival Hall re-match confirmed that Semyon Bychkov and the Orchestra of the Age of Enlightenment have hit it off. 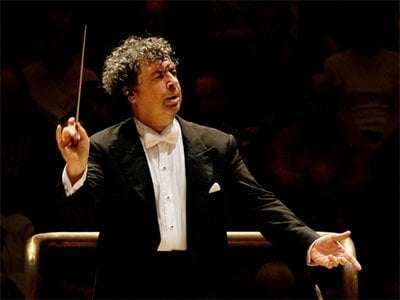 Beethoven 7 enjoyed a shapely and vibrant slow introduction, Bychkov’s incisive technique, always to the point but graphic when needed, had things in place immediately and he was scrupulous with making transitions seamless. All repeats were observed and tempos were forward-moving without ever crossing that unholy divide into rushed and forced. Indeed, here the music really danced, as Richard Wagner decreed that it should, and with the OAE’s distinctive and pellucid timbres, and balances falling naturally into place, an innate ebullience was the outcome. The second-movement Allegretto was dignified, the scherzo gambolled delightfully with its trio tempo-related and opening up majestically, and crowned by a finale that was exuberant without Bychkov pressing on the accelerator too much.

If the Beethoven was the most-satisfying of the two performances, then the Schubert was the more interesting and revealing. The OAE now opened up a paint-box of delights, right from the start with mellifluous-sounding horns that exuded a real ‘authentic’ tang, although they would be lost in the first-movement coda, under-balanced and outnumbered. And this was the compelling nature of the performance; it was for most of the time wonderfully flowing and transparently blended (dulcet trombones always in the mix but without distorting textural equilibrium, and the quietest timpani notes were always crisp, with some thunderous crescendos), yet Bychkov could be pernickety with detail and dynamics, and with a tendency to lean on phrases. But it was all so fresh and vital, and with much character, with only the first movement presenting doubts over integration through prissy tweaking of a few bars here and there, and the leaving-out of the exposition repeat felt parsimonious.

The second-movement Andante con moto had a spring in its step yet fell the right side of jaunty, the twilight-tinged strings (violins antiphonal) coming into their own and the cathartic climax not short-changed by what might be thought of as the OAE’s lack of power, for volumes were perfectly judged, and the lyrical aftermath was particularly affecting. The scherzo and trio (with all repeats taken) was full of bucolic bounce and generous song, while the finale – as throughout both works – found Bychkov choosing a tempo no faster than it needed to be, bit by bit building things inexorably to a glorious endgame, accents dug into with unanimous vigour, and trumpets saluting enthusiastically. Great!