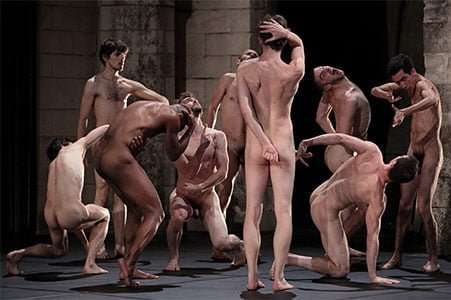 Tragédie is a brute of a piece, a big, uncompromising work from the French choreographer du moment, Olivier Dubois. To get the least important aspect out of the way first, all eighteen dancers are naked throughout this ninety minute piece. Their lack of clothing, because it is absolute, conveys nothing sexual or prurient whatsoever, indeed, such is the normalcy of their state that one accepts it immediately. What is potent is the fascination that the bare human form provokes; in the uniqueness of each of their bodies, the dancers are far more individual than if they had worn any form of costume. Tragédie has gained some notoriety for its use of nudity, but it is its content and structure that are worthy of more attention than the nakedness of its performers, however integral to the concept that may be.

Dubois’s work centres on revolution and the escape from the constrictions of society and its conventions of behaviour in order to discover a greater common humanity within. If that all sounds too much French philosophical cant, in practice he has created a work of epic proportions, astounding in its complexity and vitality, and evidence of a serious choreographic talent. Half the piece consists of the dancers emerging from and returning to a curtain at the back of the stage; they move along straight lines towards and away from the audience, twelve paces forward, twelve paces back, all to a constant thud, like the drum of slave galley. Dubois varies the motion by staggering the emergence of the dancers, having them move in groups or alone, doubling back before their twelve paces are up, all in a seemingly infinite number of combinations and variations. It assumes a hypnotic quality, intriguingly leavened by dancers suddenly moving in slow-motion, only to take up the pace once more and, at times, turning back to stare blankly at the audience.

In a conscious evocation of the progression of the French classical tragedy, the initial order slowly begins to crumble and the measured pacing is affected by bodily flicks, stumbles, nods and shakes. Finally, the movement descends into chaos, an increasingly irritated and frightened cast flailing about in some existential terror. The final bacchanal, a Dionysian eruption, leads to resolution, a new order which, unlike the opening section, is characterised by an intense humanity. The eighteen dancers bring extraordinary control and poise to their movements and are in full mastery of the impossibly complex counts which underpin them. Dubois has chosen performers of differing shapes and sizes, the more to emphasise their humanity, and each truly emerges as an individual, their qualities and attributes laid bare for all to see.

Tragédie is a monumental work, sometimes a little too satisfied with itself, which leads to episodes, such as that using strobe lighting, going on for too long. It is sometimes wearing, although one suspects that this is precisely the effect Dubois is seeking – clearly nothing is left to chance.

François Caffene’s soundscape, thudding drum moving into screeching electronics and even electric guitar towards the end, is appropriate to the concept without being notable, and is something of an aural assault. The lighting by Patrick Riou is expert, a stimulating and clever illumination of Dubois’s movements. The experience may be uncomfortable at times, but there is no doubt that Dubois has a clear and original choreographic voice; Tragédie is ambitious, at times even a little overweening, but it is little short of brilliant.