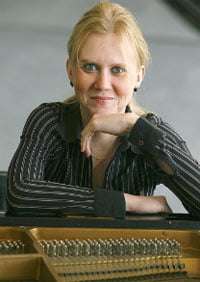 Those who attended did so at the personal invitation of His Excellency The Ambassador of Finland, Mr Pekka Huhtaniemi, and his wife, a private piano recital given at the Residence as a musical soirée to honour the following day’s wedding of Prince William and Kate Middleton. The Residence itself is palatial, the elegant room chosen for the recital a veritable feast of an Antiques Roadshow, illuminated mostly by chandeliers, displaying beautiful furniture of a bygone era and attractive paintings in literally the best-possible light. Placed in the room was a ‘baby’ grand piano, the (fine-sounding) Steinway focussing our attention on the music to come but not dominating the festive air created by the assembled throng, formally-attired (as requested, with the gentlemen in lounge suits). Pre- and post-concert, a stroll in the extensive grounds on a balmy spring evening was a tranquil pleasure.

Equally elegant is the tall, fair-haired Laura Mikkola, an experienced pianist who played with confidence and flair throughout her one-hour recital, a well-arranged programme to which the encore, ‘Wedding Day At Troldhaugen’ (Grieg’s Lyric Piece Opus 65/Number 6), exceeded the speed limit and needed rather more preparation. Mr Huhtaniemi showed a dry wit when introducing the pianist and made us all feel welcome. The main work in Mikkola’s recital was Beethoven’s ‘Tempest’ Sonata, probably chosen because of its English (and alleged) connection to Shakespeare – “read The Tempest”, Beethoven apparently replied when asked what the work was ‘about’. Mikkola gave a rumbustious and energetic account of it, rhythms chiselled; not the subtlest or most mysterious account, but full of Beethovenian declamation and heartfelt song.

An element of relentlessness was also apparent in the Chopin and Liszt pieces, something accentuated by their juxtaposition, the former unsentimental, which could be argued makes Chopin’s music all the stronger (yet its seduction is lessened). We might instead have had a couple of the gentler Mendelssohn Songs Without Words (after all he travelled to England and Scotland and became a valued friend of Queen Victoria’s). However, Mikkola’s scintillation paid handsome dividends in Rhapsodie espagnole, its huge technical challenge overcome with ease to reveal a vivacious and sunny creation – a roller-coaster for all concerned.

Maybe Mikkola misjudged the very present and dry acoustic of the room, for there was not much really quiet playing, and the lid of the piano might usefully have been placed at a lower notch. Thus Ravel’s Jeux d’eau, glistening and volatile as it was, lacked for impressionistic recesses. The opening items stood out. Sibelius’s Impromptu rippled delightfully as Chopin met Rachmaninov and found Mikkola very sympathetic, just as she was with three short recent pieces (two written for her) by another Finn, Einojuhani Rautavaara (born 1928), vibrant and shimmering music – Passionale suggesting a seascape, Narcissus owing to Debussy – and all swirling with fervour through Mikkola’s committed playing. One wishes Laura Mikkola a successful Iitti Music Festival (she is artistic director) during the summer.