Sandwiched between a pre-concert reception and a post-performance dinner for donors and patrons, Carl Orff’s Carmina Burana was the sole work on the program of Carnegie Hall’s opening night gala. Led by music director Riccardo Muti, the Chicago Symphony Orchestra, its late-September strike having been quickly settled, brought its own chorus and children’s choir to New York, along with three European vocal soloists – Italian soprano Rosa Feola, Italian countertenor Antonio Giovannini and Norwegian baritone Audun Iversen.

Muti’s impassioned reading of Orff’s secular cantata showed off the talents of the orchestra and singers and took full advantage of Carnegie Hall’s brilliant acoustics. The performance was marked by incisive attacks and cut-offs, driving rhythms, and skillful management of dynamics, tempos and rubato, all of which Muti used to add considerable dramatic emphasis. 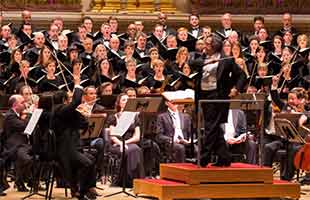 Iversen’s delicate ‘Omnia sol temperat’ was nicely balanced with soft string tremolos, and although he seemed a bit overwhelmed by the orchestra in the rapid-paced ‘Estuans interius’, he more than held his own as the tipsy abbot in ‘Ego sum abbas’. Iversen was at his best in ‘Dies, nox et omnia’, bringing off the change to a low register at the end of each stanza in touching fashion. Giovannini fared less well in ‘Olim lacus colueram’, his countertenor voice (Orff calls for a tenor) lacking the heft needed to project over the orchestra the humorous lament of the roasting swan.

Feola’s glowing soprano was delightful in the ‘Court of Love’ section, beginning with her sinuous solo in ‘Amor volat undique’, which was ably preceded and followed by the children’s choir. She sang with spirit in ‘Stetit puella’ and with delicacy in ‘In trutina’. Her glittering ‘Dulcissime’ was a perfect lead-in to ‘Ave formosissima’, which culminated in the chorus’s glorious apostrophe to ‘Blanziflor et Helena’ just before the reprise of ‘O fortuna’ brought the concert to a close.