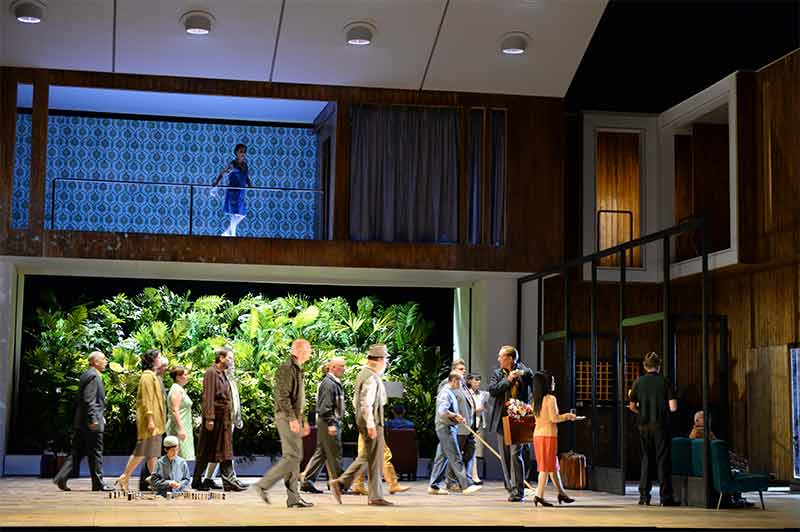 Bohuslav Martinů’s strange opera Julietta (first staged in 1938) receives few productions, so this new one for Oper Frankfurt (this was the third performance of its premiere run) was something not to pass up.

Florentine Klepper’s clever and disturbing staging, with beautiful designs, is gorgeous to look at and brought all the confusion of the town where the inhabitants have no memories vividly to life. Initially we seemed in a hotel room, with a diner restaurant and reception. In the centre were chairs and the back-wall was a lush display of greenery, which eventually moved forward to become the forest of dreams – or reality? – of the second Act. Up above was a balcony for Julietta to make her first appearances. The middle part of the lobby was encased in a scaffold-type structure, a changeable location as demanded by score and narrative. In the final Act is set largely in the Ministry of Dreams with a few armchairs and the official’s desk, and the back-wall was hidden by a purple curtain – though which people could go to wake up from everlasting dreaming (or not) – influences of David Lynch’s Twin Peaks perhaps. 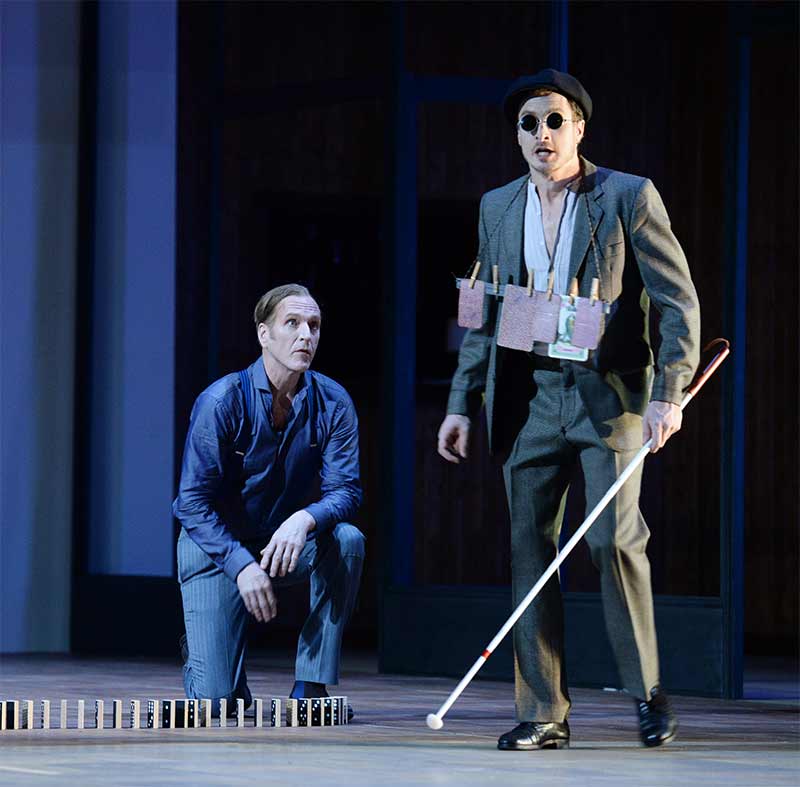 The temptation to overload this surreal opera with extraneous clutter must be hard. Klepper’s staging plays it fairly straight and relies on the text, leaving us to make up our own minds about what is going on. There is a deal of dialogue – which alas was not projected as surtitles. Not all the singers got their spoken words across – but the diction of the sung text was outstandingly good.

From the pit there was a spirited rendition of this restless score, full of lovely detail and also a romantic bloom leading into the forest scene of Act Two, and verve and enigma when needed. Praise for the pianist and the wonderful string section.

Julietta is dependent on the tenor singing Michel. Frankfurt Opera has a trump card in Kurt Streit, once famed for his elegant Mozart and Lieder-singing his voice has morphed into a more penetrating one, perhaps lacking glow but bringing indefatigable qualities over a long evening. He captured Michel’s confusion, vacillation and inventiveness, an amazing performance from both a vocal and physical perspective.

As the mysterious Julietta, the perfect woman in the dreams of men, Juanita Lascarro was a richly beguiling siren, also displaying a fine sense of comedy when Julietta starts to believe the recollections of her past life with Michel – fake reminiscences sold to her by the vendor of memories. She looked marvellous in her multi-coloured dresses – emphasising that Julietta is many individuals.

The singers in the multitudinous small roles made strong impressions. Beau Gibson stood out as the Police Officer, his attractive tenor returning in other roles. Nina Tarandek also registered in numerous parts, although her light soprano was occasionally threatened by the orchestral tumult. Michael McCown was impressive as the ministry official and Andreas Bauer was imposing as the convict.

Julietta is strong piece, which should not be a rarity. This production should bring it more into the mainstream.