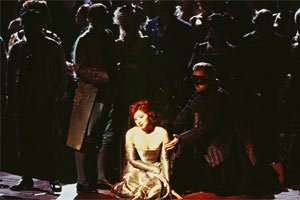 For one night only (until March and April 2009) the Opernhaus put on “La traviata” in what was a very mixed account. The production (when new it was a vehicle for Anna Netrebko) is a ‘realistic’ but economical one (its only silliness comes in having a cabbage-growing allotment in the middle of the first scene of Act Two – bizarre). Throughout, careful attention to detail is employed by Erich Wonder’s sets so that the sung words match the ideas one might have as to where the action is taking place. However, the ‘one-off’ aspect of this night did give rise to some disappointing singing and risible characterisation with the minor characters.

The story of the consumptive courtesan-heroine and the hedonistic lifestyle that she gives up for the love of Alfredo, for her only then to revert back to her previous life before dying in the arms of him is well-known. The orchestra gave a portrayal that did not rest on any well-worn path for although aspects of the staging were conventional the playing had an edge that made for an uncomfortable (in the best sense) and riveting musical experience. 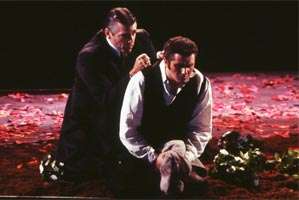 Luciano Acocella heralded this approach with an expressively-charged ‘Prelude’ that resonated bleakly with the work’s emotional core; its harshness carried into parts of the score not usually associated with these feelings but it made the climax pulverising and startlingly raw with unbridled energy. Whereas Act Two often drags (the pontificating of Alfredo’s father and then the gambling scene are certainly not Verdi at his dramatic best); here it was made to sound urgent and compelling, and the final act was gripping and laced with poignancy.

Ermonela Jaho’s Violetta did not give much away about her declining health until the final scene (rather unusual) and so the rosy picture she painted at the beginning did not reflect the music adequately. It was a portrayal that was ‘distant’ from the emotions of the work. Her singing, too, had the sign of not being part of the work, unable to conjure anything like the requisite emotional range for ‘È strano! è 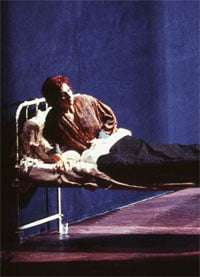 strano!’ (How strange it is … how strange!). There was little enjoyment or excitement for the rest of the aria with the high notes in ‘Sempre libera degg’io…’ (Free and aimless I must flutter) suffering when large amplitudes of sound were required.

The best tune in the opera is afforded to Alfredo in the drinking song of Act One, and this was dispatched with suave panache by Piotr Beczala. On this hearing, his lyrical tenor matched by excellent enunciation should serve him well. His joy at Violetta having given up her previous “easy, luxurious life of love affairs and expensive parties” found an ideal expression. Then, a few moments later, his appreciation of the cost to her personally (‘O mio rimorso! O infamia!’ – Oh, my remorse! Oh, disgrace!) had the hard edge that the orchestra was providing throughout. It was a brave interpretation that paid off.

The other principal player is Giorgio, Alfredo’s father. In some respects, this is a thankless, egocentric part. He wants the relationship between Alfredo and Violetta to end because her name associated with his family will taint them all and jeopardise his daughter’s marriage to a nobleman. It was a compelling performance from Angelo Veccia, his demeanour having an assumed authority that made one sympathise with his predicament, however selfish he truly is.

The other parts were transient, there being little to help them capture the limelight with the lightweight direction on offer. Cheyne Davidson’s Baron Douphol being presented as a spoilt and offended child (when challenged by Alfredo), as though this tragedy of love were being played by squabbling children, was typical of such characters being allowed to ‘wander’; however well sung these roles were, they were instantly forgettable.