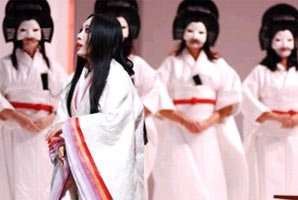 Twenty-four hours after conducting “Simon Boccanegra”, Carlo Rizzi produced from Orchester der Oper Zürich an account of Pucini’s score that combined its Japenese textures with undercurrents of American dominance. Rizzi’s sympathy for his singers was notable, and the pathos he derived from the music was incredibly moving, whether it was the longing that poured out during Butterfly’s ‘Un bel dì vedremo’ (One fine day) or in the way in which each act was detailed: happy and secure with the future, then agitated and uncertain, and finally resigned and lugubrious. Rizzi’s appreciation of how the story is told through the music was palpable, the unfolding tragedy given a human dimension.

Before each act, even before the lights went down, large video projections were seen. The first act’s was a flock of flying birds, and the third’s was the birds’ wings as falling leaves of trees. The purpose of the videos seemed to be something to look at during the orchestral preludes! 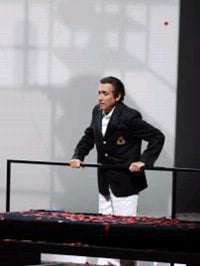 The curtain went up on a stark, sterile white set for Butterfly’s house: a three-tiered structure with a bed at the top and stairs linking all levels. For Acts Two and Three, two white chairs and a ground-floor bed were in black, for mourning. Servicable, the set’s right angles and sliding doors all added to the sense of life’s direction changing rapidly; a sliding door blocks one path whilst opening another – and who controls the door?

An energetic Cio-Cio-San (Madama Butterfly) was sung by Xiu Wei Sun. She lived and breathed her character’s turmoil and traversed the journey from trapped innocence to distraught victim convincingly, and displayed great stamina. The moment where she struggled to read the name of Pinkerton’s ship was genuinely upsetting as her hopes, we knew, were to be dashed. A moment of ultimate pathos was achieved with ‘Un bel dì vedremo’. The Pinkerton of Neil Shicoff was a rousing affair in Act One, full of life and the ‘American abroad’ ideal. He was energetic and his sung words rang out, though he failed to seduce. 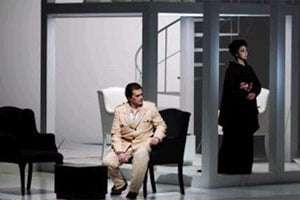 Judith Schmid as Suzuki – Butterfly’s maid – gave a well-rounded account. Very much demurring in the first act, she then was much stronger when defending Butterfly: against Goro in Act Two (he tries to damage Butterfly’s reputation over her child) and when quarrelling with Pinkerton in Act Three, because of his cowardice – determination and vitriol were laid thick in her voice at such moments.

The rest of the cast acquitted themselves in fine fashion. Cheyne Davidson’s Sharpless (the USA Consul in Nagasaki) was particularly effective, and Margaret Chalker made much of the small part of Kate Pinkerton, producing regret and determination to make the dire situation as good as it could be.

Overall, this was a fine account of Puccini’s exploration of civilisations clashing, and made for an incredibly moving evening.