Wagner
Tristan und Isolde – Handlung in three acts to a libretto by the composer, after the verse romance Tristan by Gottfried von Straßburg [sung in German with German surtitles] 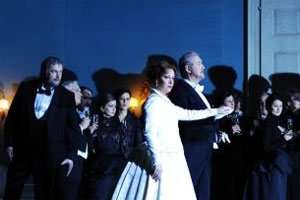 When a warrant was posted in Dresden for the arrest of Richard Wagner because of his participation in the unsuccessful May Revolution of 1849 he left his wife, Minne, in Dresden and fled to Zürich. There, in 1852, he had met his future, wealthy benefactor Otto Wesendonck. At this time he was working on the composition of “Der Ring des Nibelungen”. He became enamoured of Otto’s wife, Mathilde, and broke off composition of ‘Der Ring’ upon discovering the Tristan legend.

The Wesendonck villa sits across the Zürichsee from the Opera House (about fifteen minutes’ walk) and so it is perhaps fitting that Claus Guth should take the events of this opera to that house. For Guth the unconsummated adulterous love between Mathilde Wesendonck and Wagner forms the basis of the love between Tristan and Isolde. Guth has König Marke as the ever-watchful Otto Wesendonck. 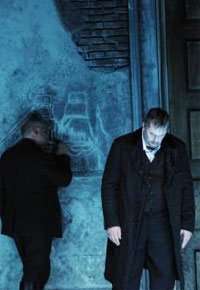 The recreation of the Villa is spectacular, with a rotating set divided into four rooms that change when hidden. There are two bedrooms, a conservatory, a large dining room, and exterior creations of the house. For Act Three the latter is derelict and features the only representation of a ship, which has been scratched into the side of a wall. The House is occasionally populated with many men dressed in formal evening wear, attending to the King.

There is an awful lot going on in this production, and it is probably too clever. Isolde and Brangäne were made up to look identical, a cheap copy of the sequence from Ingmar Bergman’s film “Persona” (1966) where the two women’s faces are perpendicular to each other – but what was Guth trying to say? This confusion between the real and the dreamworld may be the point but it was clunky when expressed here. Wieland Wagner (the composer’s grandson) invented the post-War idea of Regietheater, and so perhaps Guth can be forgiven for this busy staging but it hardly reflects any contemporary zeitgeist. 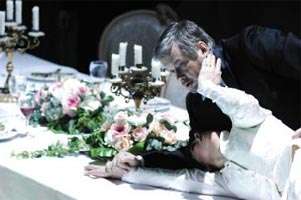 There were silly moments, too: the explosion of Tristan and Isolde’s passion resulted in them sweeping crockery across a table so that they could climb on; at the end, Brangäne is led away, hand-in-hand, by Marke … the possibility of a sequel! The effect of all of this excess was that the whole was much less than the sum of its parts. Volker Michl’s distracting choreography hampered proceedings, too, with characters dashing about – there was too little reflection on the stupendous themes of this, the greatest work for any theatre.

Fortunately, Ingo Metzmacher was in the pit and produced music-making with unquenchable yearning and sexual passion. A daring ‘Prelude’, with bold, pregnant pauses heralded a tension-filled whole. This was an astonishing account of the score, epic in line, scope and fever; yet, in reserve, the ability to conjure tenderness and heartache. 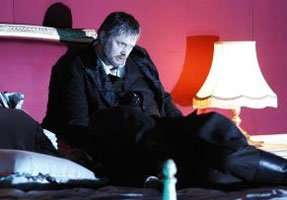 Ian Storey was thrust into the limelight when he stepped, with little notice, into the role of Tristan at La Scala in December 2007, Daniel Barenboim conducting. Good Tristans are rare beasts, the part requiring not only stamina but a wide range. Storey managed the latter whilst falling short with the former. Storey was suffering with a cold and during Act Two he was struggling badly.

What Storey does possess is heroism and he gave the words their full meaning. His tall frame, too, went some way in allowing him to dominate proceedings. Ironically, his long, Act Three dialogue with Kurwenal, where there is a mixture of feverish and resigned discourse found him at his best and his ‘suicide’, where he thrusts himself on to Melot’s dagger, was wholly believable.

Nina Stemme was Isolde. She recorded the part with Plácido Domingo, Antonio Pappano conducting, for EMI a few years years ago. Hers is a small voice that even in this medium-sized house does not have the power to ‘ride the wave’ of emotion and pack the punch that is required. She simply could not convey the sense of longing, excitement and resignation that is required, restrained rather than willing to throw everything away in abandonment for love.

Alfred Muff’s König Marke was another understated account. Marke has had his future bride taken from him by his trusty emissary and yet the expression of Marke here was nonchalant when set against Isolde and Tristan expressing their love in Act Two. He had clear diction but lacked the required blackness and depth and was meandering in his approach. Martin Gantner was more than a fine Kurwenal. His pain at his master’s prolonged demise was palpably captured in the longing and despair of his Act Three exchange with Tristan.

Isolde’s ever-loyal maid Brangäne was the experienced Michelle Breedt. Her lengthy Act Two ‘look-out’ (she warns Isolde of Melot) expressed wonderfully the regret at the difficult situation she has put her mistress in because of her exchanging the death potion for the love one. A firm and persuasive legato gave this special resonance. The treacherous (to Tristan) Melot had a delicious expressivity in Volker Vogel and his physical duel with him was matched with sharp-tongued vehemence. The contributions from Martin Zysset, Marcell Bakonyi and Javier Camarena as, respectively, the Shepherd, Steerman and Young Sailor (the latter looking rather cute in a fetching sailor outfit even though he was not seen until he took his bow!) were all on target.

The triumph though was the orchestra. With clever placing of off-stage instruments, and some utterly compelling solo contributions, especially the mournful cor anglais that dominates the opening of Act Three, Ingo Metzmacher produced a sound that heightened the turmoil of the drama and also the ecstasy of the yearning love; a profound achievement.