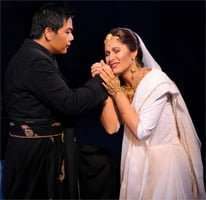 Bizet’s opera The Pearl Fishers is an exotic tale of love, friendship, betrayal and regret, set against the backdrop of Ceylon in ancient times. Opera Australia’s production, from 2000, presents it somewhat confusingly as the flashback of a former Governor (Zurga) of a French colony in India who, one hundred years ago, has returned from Opéra de Paris where he has witnessed a story (The Pearl Fishers, anyone?) that reminds him of his youth in Ceylon and his close friendship with Nadir. The maths doesn’t add up. The aged Zurga is seen at the close, too, gazing at a proscenium arch with the staging of the previous scene within it in miniature, sipping cognac and musing on his regrets. All very profound! 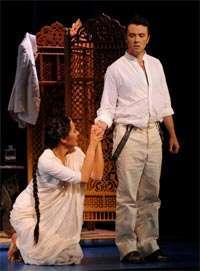 The story itself is rather convoluted. Zurga and Nadir are friends. Nadir falls in love with the priestess Léïla, but realising this would destroy his friendship with Nadir, renounces her. The men promise loyalty to each other and separate. Much later, they reunite, and Zurga is appointed leader of a Pearl Fishing expedition. A priestess (Léïla, of course) is chosen to pray for them. To cut a long story short, Nadir ends up with Léïla, much to the High Priest Nourabad’s fury, and, even worse, Zurga’s wrath: the latter insists on death for them both. In the midst of this it is discovered that Léïla had saved Zurga’s life many years ago. Zurga sets fire to the camp to allow the lovers to escape, whilst remaining in his mind bitter and lonely.

John Conklin’s sets are lovingly realistic, as are the costumes by Clare Mitchell. It is all faithful to Bizet’s setting, and services the story adequately, without fuss. There is a temple, the lighting is subdued and exotic, and the different scenes evoke a nondescript ‘distant’ shore. It could be anywhere in the East, or North-West from down-under here! 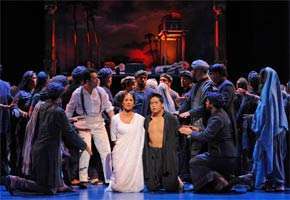 This performance never caught fire, although much praise to both Christopher Hillier and Gennadi Dubinsky who had to step-in at short notice to replace indisposed colleagues. The main problem was the stand-and-deliver approach for singing: it meant that there was little feeling between the characters. Rarely did characters look at each other when pouring their hearts out. 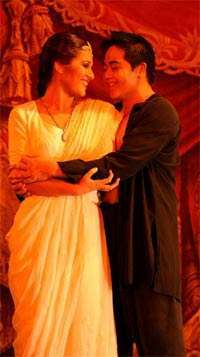 Nicole Car looks how one imagines Léïla: slim, not-too-tall, and humble, with some defiance, and gave a committed performance, though her top notes were cloudy. Hillier was mostly very good: there were occasional audibility issues, but his high-lying baritone was sweetly delivered, and he had blackness in reserve for his denunciations of Léïla and Nadir. As Nadir, Henry Choo produced a ringing tenor effortlessly, and his boyish charm ably added to our sympathy for him. Dubinsky was a rather wooden Nourabad, constrained by his role perhaps, which is unforgiving dramatically.

The villagers strutted their stuff around this candied confection with ease, and delighted the eye and ear. Guillaume Tourniaire conducted a pleasing account of the music, which supported the singing very well.

Regarding the sound from the pit: I was sat in the middle of Row G of the Stalls, so only seven rows back . The Stalls seating is heavily raked, so one can see clearly the players. It is likely because of this proximity that everything sounded fine, whether during solos or full-scored passages. It was certainly preferable to last night’s piped-in “holographic sound” for Die tote Stadt.