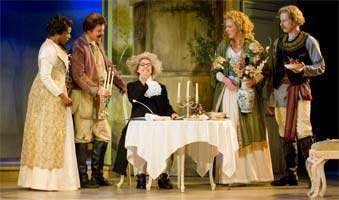 Here’s a turn-up for the books: Opera Holland Park’s Mozart-Da Ponte cycle, which began two years ago with an imaginatively staged but musically undernourished Don Giovanni and continued last year with a disappointing Le nozze di Figaro, concludes with a Così fan tutte that’s near-ideal. On second thoughts scrub the “near”, for this hidden gem of a production, tucked away in a London park, is the best thing I’ve seen all year. With sublime singing and playing, sensitive conducting and a stage concept of disarming ingenuity, the stars are shining brightly over Kensington and Chelsea this summer.

Così is always a ticklish prospect in the opera house. Take a slender plot that’s as far removed from ‘right-on’ as it’s possible to be for modern sensibilities (let’s be honest: it is a three-hour exercise in mysogyny), locate it in a dramatic vacuum and limit the cast to six singers, and its high failure rate comes as no surprise. In his ‘Armani’ production for The Royal Opera, Jonathan Miller solved the opera’s problems by stuffing it with postmodernist sight gags. At OHP, by contrast, Harry Fehr – who has overseen revivals of Miller’s production on more than one occasion – undercuts the work’s distasteful aspects by attacking them head-on in the most unexpected fashion. 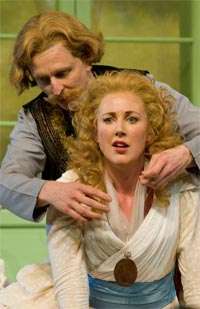 In an ornate conservatory setting Fiordiligi and Dorabella await the arrival of their beloved suitors while on the outside, looking in, a party of supernumeraries – students perhaps, or colleagues of the gimlet-eyed Don Alfonso – observe the pair as they unwittingly participate in his social experiment. Ferrando and Guglielmo pop in and out of the sisters’ ‘stage’ (which for them is reality) and the entire opera unfolds in the manner of an eighteenth-century Truman Show.

It is a brilliant idea, apt yet unsettling, and it succeeds on every level. Although the opera is located for once in its correct period – a radical choice for a director these days – routine and predicability are held at bay by Fehr’s added layer of meta-reality. His staging requires the hapless women to remain visible throughout the opera (almost), which means that we, the audience, see them languish in troubled silence for long periods, alone with their thoughts – and by extension we become complicit in the experiment. At the opera’s dénouement Alfonso lifts a bell-jar lid on his desk and… but no, that would be telling. 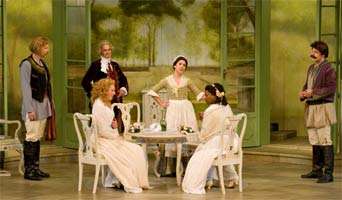 If the staging is satisfying, the music is a joy. After two years of indifferently conducted Mozart at Holland Park, Thomas Kemp makes an exceptional debut as an opera conductor and coaxes a ravishing blend of colours and expression from the supple, responsive City of London Sinfonia. Kemp favours light textures throughout; he never lets rip, not even in the jolly martial choruses (“Bella vita militar!”) and he constantly emphasises the music’s intimate qualities.

A sextet of fine singers give individually delineated performances that together possess the homogeneity of a vocal ensemble. Elizabeth Llewellyn (who had appeared less than comfortable as Countess Almaviva last year) is in her element as Fiordiligi, and her partnership with Julia Riley’s Dorabella results in a vocal blend of the utmost sweetness and beauty. (And how refreshing it is to see Riley in a dress after two years of trouser-roles for English Touring Opera!)

The scheming Don Alfonso is no less impressively sung by Nicholas Garrett, OHP’s quondam Don Giovanni, who luxuriates in the character’s intellectual glee and articulates his vocal acrobatics with ease as he lectures the excellent Opera Holland Park Chorus and gives orders to his henchwoman, Despina (Joana Seara, lively and witty, with an engaging presence and a versatile singing voice). As for the lovers, are they cheats or suckers? There is little room for doubt in Fehr’s reading: Andrew Staples (Ferrando) and Dawid Kimberg (Guglielmo) portray them as part comic rogues, part victims who find themselves increasingly out of their depth in the cruel game they have been forced to play. The two singers’ stylish vocal performances are tinted and enriched by this patina of psychological duality.

It is rare to spend an evening at the opera wreathed in smiles. This production of Così fan tutte is a total triumph and a proud peacock-feather in OHP’s cap. Intelligent, clever, beautifully designed by Alex Eales and musically transendent, it demands to be seen and certainly deserves a longer life than its nine scheduled performances. Catch it while you can.