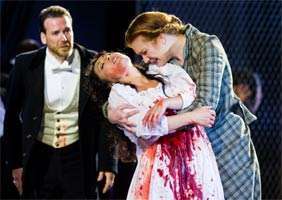 Once again the weather worked to Opera Holland Park’s advantage for its new staging of Donizetti’s tragic tale, which opens this year’s season. Dark, scudding clouds and soughing winds added a chilly, Scottish zest to Olivia Fuchs’s admirably straightforward production. Not for her the distractions of incest – well, perhaps a bit when Enrico over-lustily manhandled his sister – or paedophilia. Motives and relationships are robustly defined, with a splash of overheated directorial heebie-jeebies reserved for the handling of the chorus’s bigger moments.

In one of OHP’s more uncomplicated productions, designer Jamie Vartan’s set is generalised and, in the end, too simplistic – a wide, oblong slab of hard Scottish slate, with a significant fissure grudgingly opening to the gales of melodrama to reveal the façade of Holland House doing duty as the doom-laden gothic Lammermoor pile, and some wire-mesh panels that could be arranged into not-so-symbolic cages and barriers. You’d have thought OHP could have saved themselves a bob or two, dispensed with the slate slab and for once put the front of Holland House to effective use. The only other stage element is an institutional-type bed, which said it all about the joyless, perfunctory nature of Lucia’s commodity status in her forthcoming nuptials.

The costumes are generic late-Victorian, without a square inch of tartan, although the chorus’s red gloves, particularly the men’s, seemed creepily dipped in gore both hymeneal and murderous. The set isn’t that big and bold a statement; it’s just there, making a few points very obviously, and you quickly got used to it. Colin Grenfell’s lighting, though, does make its atmospheric presence felt throughout, and not just when the lighting rigs were shifting anxiously in the gales whistling through the auditorium. 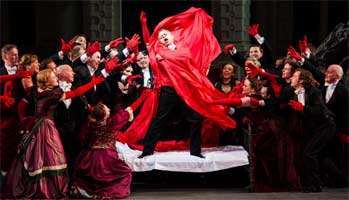 Along with the weather, this Lucia is strongly cast, setting the bar high for the rest of the season. The Russian soprano Elvira Fatykhova is mesmerising in the title role, putting all the finely poised tricks of bel canto to eerily expressive use. Her light, vibrant voice might not have bags of weight and volume, but she draws you into Lucia’s romantically fragile, passive plight, to the extent that even when she had to contend with some blatant noises-off – helicopters and squawking children – she managed to direct attention back to Lucia’s compelling, pathetic self. She was a Mélisande-like lost soul from the start, her ‘Mad Scene’ dipped in and out of delirium with unnerving realism, a far cry from hefty hysterics, and Phillip-Alexander Marguerre’s superbly played glass harmonica added to the atmosphere of unravelling self-possession.

There is strong chemistry between her and Aldo Di Toro’s Edgardo. He projects Donizetti’s big tunes with lyrical bravura, generosity and assurance. The Act Three scene where he squares up to Enrico made a great impact – not surprisingly, since David Stephenson had been such a commanding presence throughout as Lucia’s ruthless, desperate brother. You could have cut Enrico’s relief when the marriage contract is finally signed with a knife, and Stephenson sung with a finely geared, dark machismo, complete with riding crop.

The smaller roles were just as effective – a strongly sung and touching Alisa from Olivia Ray; a magnetic ungainly grace emanating from Keel Watson’s majestically sung Raimondo, who put Nicholas Ransley’s weasely Normanno in his place with implacable fury; and a cipher-like Arturo, insidiously played by Aled Hall, seeming more than ever like an extension of Enrico’s will than a character in his own right.

Apart from some instrumental balance problems at the beginning, the orchestra added its own gothic horror to Donizetti’s transparent scoring, and Stuart Stratford really had a handle on the immediacy of the opera’s unfaltering narrative with finely judged tempos and a sense of how the drama grows. The Act Two sextet finale, in particular, burrowed deep into the opera’s romantic psyche. Highly recommended.