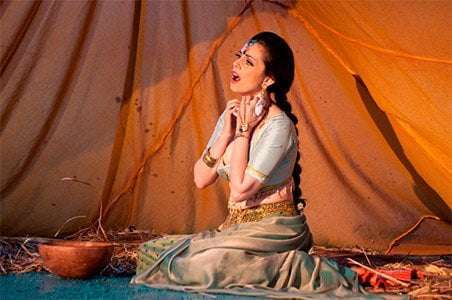 Given that Opera Holland Park’s co-residents amid the Kensington greenery are peacocks, a bird native to Sri Lanka, their odd obbligato contribution to Bizet’s Ceylonese opera might be welcome as local colour – within reason. But reason isn’t these creatures’ strong point, and at the opening performance of Les Pêcheurs de perles (The Pearl Fishers) they certainly picked their moments to make their frisky calls. It was worse than a ladies’ rally at Wimbledon.

The City of London Sinfonia carried on stoically under Matthew Waldren, a dynamic musician who won his spurs at OHP as an exceptional chorus-master between 2009 and 2011. It is typical of this company to keep faith with its home-grown talent and the young conductor repaid the investment handsomely. He shaped Bizet’s score with great sensitivity, alive to its exotic colours and keen to display the melodic orchestrations to their best advantage. The players responded with style, no-one more so than oboist Ruth Contractor in the ravishing solo that heralds Nadir’s approach to Léïla, “De mon amie fleur endormie”. Pace and dynamics were ideal; Waldren is a talent to watch. 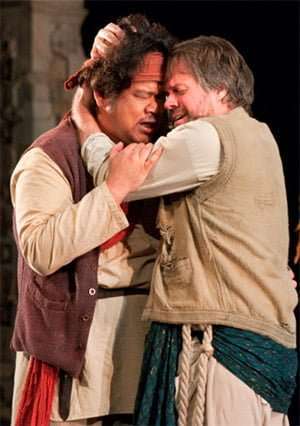 Matters on the stage itself were less enthralling, which is a shame given the heights scaled by OHP’s preceding production this season, a mesmerising account of Puccini’s Madama Butterfly. It’s not that Oliver Platt’s direction of the singers was at fault – he commendably staged “Au fond du temple saint”, the celebrated ‘bro-mance’ duet, less as a set-piece than as a dramatic scene that propelled the action forward – but the visual side of things was a mess. The massive fawn awning that hung for lengthy spells over Colin Richmond’s bare stage may have appeared reasonable at the maquette design stage but at full scale it looked shabby. Since in ensemble scenes Platt disposed the Chorus hither and yon over Richmond’s wide expanse of blue flooring, the eye was not drawn to key locations as it needed to be, added to which the impact of Katharine Ryan’s idiomatic dances was diminished by their being scattered rather than grouped.

Platt has chosen to stage Les Pêcheurs de perles exactly as written, without affectation or imposition, and the production has something of Aladdin about it. Cormon and Carré’s libretto, about the rivalry between a diver and a hunter for the love of a woman who (unfortunately for them both) is now a goddess, tells a hokey tale; neither tragedy nor comedy, it needs three outstanding soloists to keep it afloat. Unfortunately, neither Jung Soo Yun as Nadir, the hunter, nor Grant Doyle as Zurga was at ease at this first night. The South Korean tenor struggled with the high tessitura of his plangent aria, “Je crois entendre encore”, while Doyle, an outstanding baritone in Mozart and Rossini, appeared to find Bizet’s music too heavy for his voice and his normally sweet-centred tone lost its focus as he battled with the epic material Zurga has to deliver in the final Act.

Soula Parassidis brought a startling elfin beauty to the role of Léïla and sang with clear, expressive lines. Even though the part really calls for a more free-flowing, lilting voice than she possesses, only a slight but nagging worry over intonation prevented the Greek-Canadian soprano from being wholly convincing as an object of adoration. Keel Watson was a powerful presence as Nourabad, both physically and through the impact of his resonant bass voice.

Les Pêcheurs de perles is the ideal opera for a summer evening: it is packed with melodies, the story is not too taxing and it does not outstay its welcome. The audience cheered it fulsomely and by the end even the noisy birds had thrown in the towel. Peacock pie anyone?