Mascagni
Cavalleria rusticana – Opera in one act to a libretto by Giovanni Targioni-Tozzetti & Guido Menasci, after Giovanni Verga’s play, based on his story [sung in Italian with English surtitles]
Leoncavallo
Pagliacci – Opera in two acts and a prologue to a libretto by the composer, based on the play Un drama Nuevo by Don Manuel Tamayo y Baus and the play La femme de tabarin by Catulle Mendès & Paul Ferrier[sung in Italian with English surtitles] 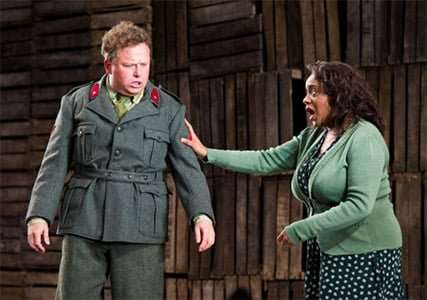 These two prime slices of nineteenth-century verismo were not written for each other yet they are married in all but name. They share a theme, albeit loosely: that of not-so-civil partnerships disintegrating into jealousy and murder in rural Italy. Indeed, the very title of Cavalleria rusticana – ‘rustic chivalry’ – has all the perverted irony of a modern term like ‘honour killing’.

Curiously, given the Mediterranean setting of both Mascagni’s and Leoncavallo’s operas, there was more sunshine outside the auditorium than on the stage for the opening of Stephen Barlow’s new production for Opera Holland Park. This is a Cavalleria rusticana where oranges are indeed the only fruit, yet faced with a double-layered floor-to-ceiling wall of brown crates in designer Yannis Thavoris’s oppressive set we can’t see the trees for the wood.

It is five years since these two warhorses were last harnessed together in London, and what a pleasure it is to be reminded of their melodic and emotional sweep. Barlow brings glorious Cinecittà Techniscope to the wide expanses of the Holland Park stage in a production that’s more Fellini than Zeffirelli, yet many of his ideas fall uncharacteristically flat. He is normally a most imaginative director but there is little evidence of that here beyond one nifty link that joins the operas together. The updates (‘Cav’ to a dour 1944, ‘Pag’ to a garish 1974) are gratuitous. 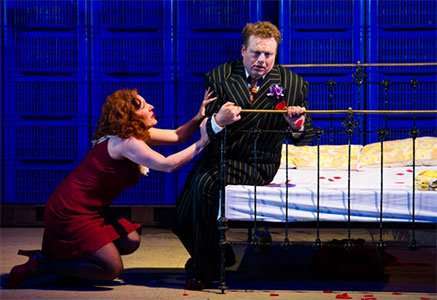 Peter Auty, who takes the principal tenor roles in both operas – a heroic exploit in every sense – was in remarkably fresh voice throughout a long and taxing evening. His timbre was strong and resonant, his dramatic engagement absolute. In Cavalleria rusticana he was ideally partnered by Hannah Pedley as Lola and the splendid Sarah Pring as Mamma Lucia, although Gweneth-Ann Jeffers brought insufficient fervour to her under-directed interpretation of Santuzza.

The baritone Stephen Gadd, in very good voice, moved convincingly from a spivvy Alfio in ‘Cav’ to the deformed Tonio of ‘Pag’, but in the latter work Chang-Han Lim’s game performance as Silvio was hamstrung by his rudimentary acting. It fell to the Nedda of Julia Sporsén, a soprano whose star is very much in the ascendant, to show how it’s done – whether revelling in the bliss of plunging tired feet into a wash-basin during “Oh! Che volo d’augelli?” or else struggling to conceal her anguish while vamping a sultry, Commedia dell’arte tart during the clowns’ performance.

The Opera Holland Park Chorus, habitually one of the glories of this festival, felt undernourished at the opening performance, while in Cavalleria rusticana the excellent City of London Sinfonia sounded positively Elgarian under Stuart Stratford’s unyielding baton (though he embraced the madness with greater abandon in I Pagliacci). Indeed, the entire evening was just a touch too British for these ripe and sun-drenched scores.

There was still much to enjoy – indeed, to revel in – and the occasional reservation should not be allowed to cloud what was, by any standards, a richly entertaining double-bill of powerful, tune-packed operas. But ‘Cav’ and ‘Pag’ should do more than merely divert, and if only Barlow and Stratford had dared surrender themselves to the music’s passion, then these tragedies’ combined impact might have proved overwhelming.