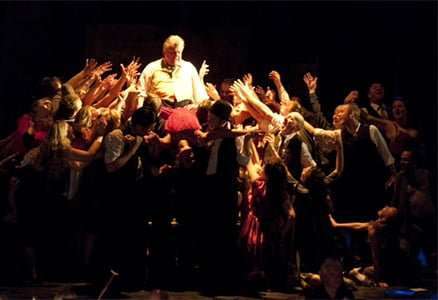 Born in Venice, and he died there, Ermanno Wolf-Ferrari (1876-1948) – his father was a German artist, his mother an Italian pianist – may not be a household name as a composer, but he wrote some very attractive music, not least for The Jewels of the Madonna, which Opera Holland Park is here resurrecting, very successfully and with full justification, “a blood-and-thunder melodrama, a highly-spiced stew of sacrilege, jealousy and passion under the Neapolitan sun.” That’s a fair description. First performed at the Kurfürstenoper in Berlin on 23 December 1911 (as Der Schmuck der Madonna), The Jewels of the Madonna is not a Christmas opera!

We’re in the streets of Naples on the feast-day of the Madonna del Carmine. We have a blacksmith, Gennaro, and his troublesome adopted sister, Maliella, a struggle for her ‘mother’ Carmela. Then there are the camorra (Neopolitan mafia) led by Rafaele, who wants Maliella for himself; trouble is, Gennaro is hopelessly in love with her, but she rejects him. To impress Maliella, Rafaele says he’ll steal the jewels that are part of the statue of the Madonna, and although he’s not a man to be meddled with, it’s Gennaro who does this particular deed for much the same reason; it works in terms of a sexual conquest but Maliella tells all. This riles Gennaro who rejects Maliella and is then after Gennaro’s blood. The ending of the opera may well surprise, though; suffice to say that it is both transcending and resounding. 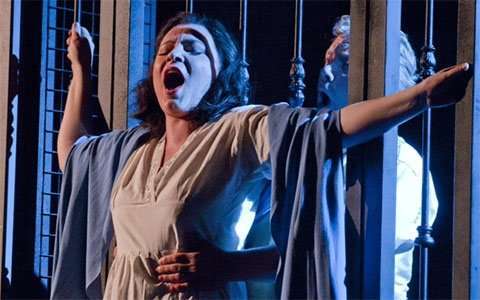 Musically, Wolf-Ferrari is very much Italian; Puccinian, of course, and also breathing similar air to his other contemporaries, and there are some Germanic influences, too; but the final mix is personal and assured, always likeable and enjoyable and often thrilling. Wolf-Ferrari uses a varied and colourful orchestra, just big enough to fit OHP’s pit before the need to ‘reduce’ comes into effect (as happened with Zandonai’s Francesca da Rimini a few years ago). There is no lack of extravagance: in addition to a standard full orchestra, Wolf-Ferrari requires two pianos, an accordion, guitar and mandolin, a harp, and a marching band. It all adds to the vibrancy of an imaginative and story-serving score, all well attended to by the City of London Sinfonia and Peter Robinson.

The music is exuberant, sweet and heartfelt, well matched to the characters and their desires and temperaments. There is a much to get enthused about: a mother/son duet, the feisty music for Maliella, a sense of danger for Rafaele and his gang, much that is ripe and pulsating, tenderness too, and a striking in-Latin passage at the end of Act One that seems to mix the ‘Te Deum’ from Tosca while anticipating Stravinsky’s Oedipus Rex … the list isn’t endless, but there’s a lot going on here. Wolf-Ferrari does verismo as well as the next Italian. The familiar ‘serenata’ – you’ll know it – that opens Act Three is a winner and has already turned up earlier in the opera in a different guise. The final Act includes a marvellously energetic ballet – choreography in search of an orgy! – and then the ending that will surprise, and cheer. The audience did.

Terrific cast, too. Natalya Romaniw (born in Swansea) is great as the rebellious Maliella, a charismatic Carmen in the making; the two male leads are very well taken, and Diana Montague is perfectly cast as the caring if restricting mother. The staging is lively and kaleidoscopic (including a ridden-on scooter), the extra-large chorus really tests the acoustic, and with sets, decor and costumes that look the part. It’s a surprisingly short run, just four further performances. The Jewels of the Madonna is unfairly neglected; OHP has done a great rescue job and a visit to its surrounding greenery and in-marquee lavish production is heartily recommended. If I were giving stars, it would be five.