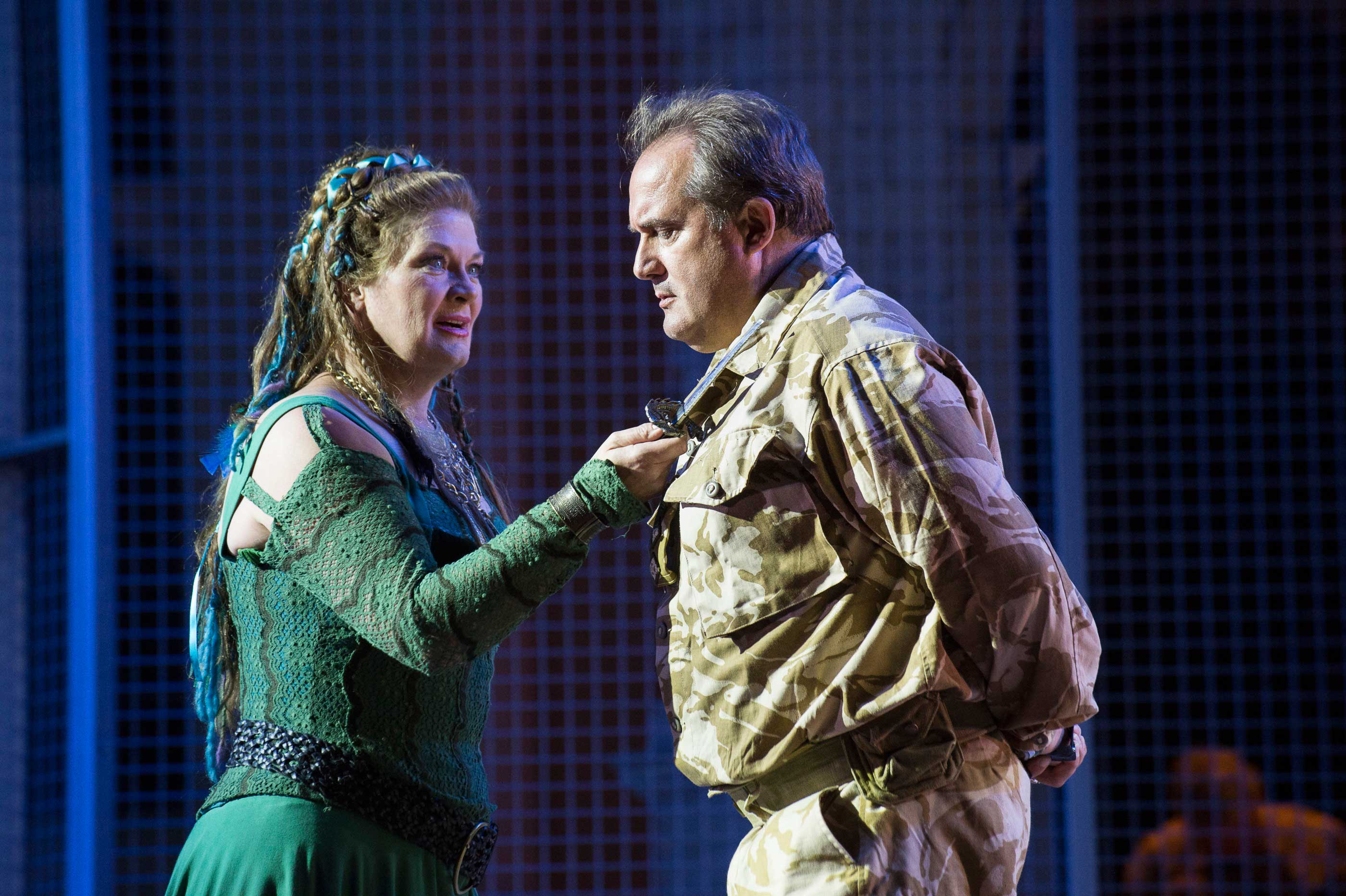 How appropriate, in the week in which the Anglican Synod voted for female bishops, that Opera Holland Park mounts a new production of the opera with perhaps the most famous of priestesses, Bellini’s Norma. For an acknowledged masterpiece it’s amazing that it’s not attempted more often, even given the trickiness in casting the title role. There have been few London performances over the last 30 years, including the Royal Opera’s two concert performances with Nelly Miricioiu in May 2000, the 2004 Opera Holland Park staging (again with Miricioiu), for which the company commissioned a critical edition edited by Brad Cohen (who conducted then) and, more recently, both English Touring Opera’s concert performance in 2009, with Yvonne Howard, and Opera North’s acclaimed Christopher Alden production in 2012, with Annemarie Kremer.

All credit then to Opera Holland Park for championing Norma a second time. Director Olivia Fuchs finds a satisfyingly contemporary resonance by setting it a recognisably modern occupation – desert combat soldiers representing Rome, marshalling the subdued Gauls into and out of a barbed-wire topped fenced enclosure, in which rises the stunted trunk of the sacred oak of Irminsul, the spiritual symbol of the oppressed masses. The action during Bellini’s spirited Overture could not be more chilling: soldiers taunting the women folk, leading to three brutal sexual assaults. This is opera that wants to tell it how it is. 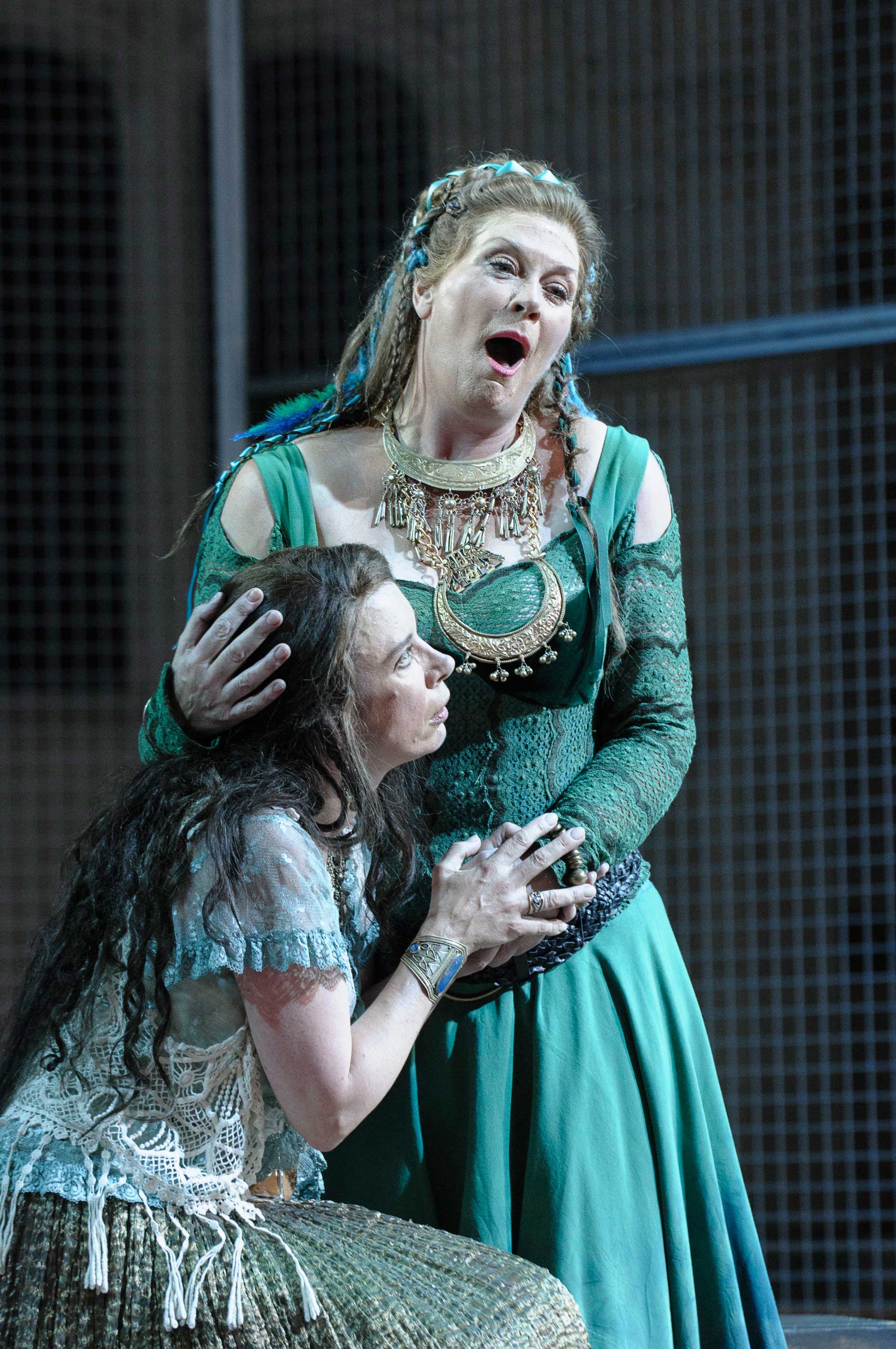 While I found Oroveso’s (Keel Watson) initial call to revolution (only waiting his daughter, Norma’s signal) underplayed, the real emotions are the personal ones. In the first of the two notable duets between Yvonne Howard’s Norma and Heather Shipp’s Adalgisa, the latter reveals she wants to leave the priesthood for the love of a man. Recognising her own situation of a secret love, Norma agrees but – Bellini and his prolific librettist Felice Romani (who warrants a welcome article in the OHP programme) take a leaf out of Greek tragedy’s book – belatedly asks who Adalgisa’s lover is. When Adalgisa names the Roman proconsul Pollione (who is being recalled to Rome, wanting to take Adalgisa with him), Norma’s life is shattered, as she has secretly borne Pollione’s two children. Bellini’s cumulative waves of musical emotion may develop more naturally over the run but, underpinned by Peter Robinson’s unfussy conducting of the City of London Sinfonia, the first night already built quite a frisson.

While the most famous part of the score is Norma’s ‘Casta diva’, which comes earlier in the first Act, I was more impressed by the girls’ powerful duets, and also Norma’s Medea-like plotting to kill her children to revenge Pollione. Even Wagner acknowledged the Greek tragedy nature of the plot (and, who knows, might have subconsciously lifted the idea of a central tree for one of his own operas…?).

It is certainly the female leads that take the honours. Yvonne Howard perhaps humanises Norma without ever letting rip, but with Heather Shipp’s touching naivety, they work together extremely well as the emotional thread of the opera. I did wonder though whether Joseph Wolverton’s Pollione was worth either’s emotional investment. Without giving too much away, the climax is powerfully handled, with Howard playing her character’s distraught situation extremely well, depicting Norma’s predicament and ultimate decision (who will she betray to her fellow Gauls as a sacrifice before the revolt against the Roman oppressors?) with urgency and sympathy, especially her appeal over her children to her father Oroveso. Bellini helps, of course, and it was great to hear the score presented with such detailed musical preparation and cohesive staging. The Chorus – in its singing and action – was committed and believable, and the first night was greeted, one boo aside, with deserved enthusiasm.