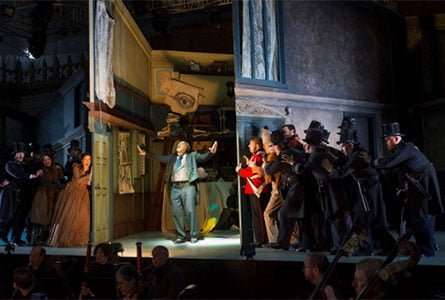 Opera Holland Park continues to play from strength with its new production of Rossini’s comic masterpiece. Oliver Platt has given his traditional staging of The Barber of Seville a smattering of Dickensian exaggeration, with additional nips of Gilbert & Sullivan and Monty Python for good measure, but not so as to make the characters irredeemably ridiculous. Neil Irish’s set is a (slightly wobbly) triumph, a shabby terrace of houses in dramatic, cut-away perspective that opens to reveal the interior of Dr Bartolo’s house, which defers to him as a medical man but, more to the point, is a defiantly chaotic, bachelor household in dire need of the feminine touch and a good spring clean. Platt has a sharp eye for comedy, and the ensembles are tightly directed. He also has a first-rate cast at his disposal.

Kitty Whately is an experienced Rosina, and her warm mezzo is superbly mobile and articulate in the coloratura tricks, her top range has an alluring brightness – ‘Una voce poco fa’ was just the first of many delights – and her acting had impressive get-up-and-go. 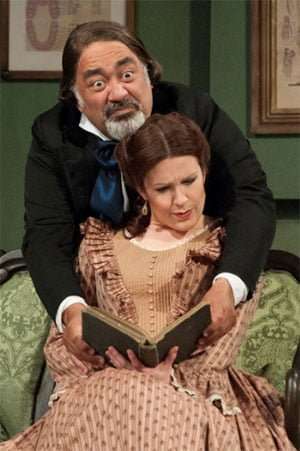 Another notable OHP debut came from the young Maltese Nico Darmanin. His bel canto tenor is an instrument of pure pleasure, elegant, secure, with sigh-inducing top notes and a smooth technique in all the runs and other decorative stuff. He’s also personable, handled the changes between Count Almaviva / Lindoro / drunken soldier / obsequious music-master with consummate ease and was an ardent lover and up for any amount of broad comic business.

Nicholas Lester has been nurtured by OHP over several years, and with good reason. He has a terrific baritone, nimble, graceful and with a virile top range of great quality. His Figaro exuded authority and charisma, compounded by his being handsome and about a head taller than the rest of the cast – height is such a reassuring accomplishment. He wound the plot round his little finger with enormous skill and his ‘Largo al factotum’ alone was worth the trip.

Capping this fine quartet of principals was Jonathan Veira’s excellent Bartolo, an opera buffa masterclass, his shrewd comic timing animating every move and he delivered a patter aria of impressive accuracy.

William Robert Allenby was indisposed for this performance, so both Basilio and Fiorello were sung by Nicholas Crawley – a starter role and a significant upgrade all in one. We got a clearer idea of his vocal charms as Fiorello, whose ‘Piano, pianissimo’ set the comic ball rolling in fine style, with very funny back-up from the Chorus. Creepy Basilio’s ‘La calunnia’ showed off Crawley’s talent for some brilliant caricature. Alinka Kozari as the worn-down housekeeper Berta sung her catchy aria of disappointment in a memorable spirit of resignation, but, strangely, Platt did virtually nothing with it directorially.

The one big misgiving I had was Matthew Waldren’s conducting. The Overture was generously shaped and fully anticipated all the mischief waiting in the wings and he looked after the singers well and built up a fine Act one finale. But in the end, I missed that extra twist of momentum and tautness so vital to Rossini. Nothing went adrift in the ensembles, but there was just a nagging whisper of slackness. Also the continuo (issuing from a slightly too-loud digital piano in period mode) was too far away from the singers and didn’t stand much of a chance of becoming almost a character in its own right in the recitatives.

I’m sure, I hope, that the pit side of things will improve, because this is as good a staging of Barbiere as I’ve seen in years.