Opera Holland Park’s new production of “Don Giovanni” is fun, intelligent, and laden with enough new ideas to surprise and delight even those who have seen the opera dozens of time. 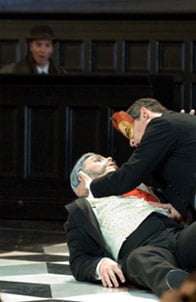 Stephen Barlow’s late-Victorian setting works a treat. In many ways it’s the ideal period: the opulent privilege of the gad-about-town nobility, prim-and-proper ladies outwardly shocked by the lascivious Don. Clever touches abound. In the opening scene, after being shot with his own pistol, the dying Commendatore leaves a pool of blood on the tiled floor that stubbornly resists successive attempts by servants to mop up, remaining a Lady Macbeth-like reminder to the Don of his crime. His new-fangled gramophone provides a neat excuse for the presence of on-stage music in each of the act finales; there’s also a street-fiddler or two. In Act Two the body of the Commendatore is born onto the stage in an ornate coffin. I won’t spoil the surprise of his initial, brilliantly effective, ghostly appearance; his terrific eventual manifestation is an appropriate mixture of Dorian Grey and “Ruddigore” (both products of the supernaturally-obsessed Victorians). In an exceptionally chilling final scene (aided by powerful brass playing) the Don is sentenced to hell by a ghoulish judge and jury. There are plenty of laughs too – by far the biggest of which went to the hotel bell-boy who, seeing no one else in the vicinity, thinks the Don is serenading him in the mandolin aria and is not shy in responding accordingly. 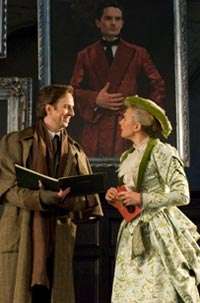 Each member of the strong cast thoroughly embodied their role. Every inch the rakish Victorian nobleman, Nicholas Garrett swaggered magnificently in white-tie-and-tails or smoking-jacket – a port-swilling, cigarette-smoking Giovanni. Cock-sure, preening and vicious, his characterisation is spot-on. The voice is good too, but it didn’t always carry as strongly as it might have. The velvet baritone of Robert Winslade Anderson’s Masetto similarly failed to cut through. Although denied Don Ottavio’s ‘Dalla sua pace’, Thomas Walker gave a storming account of ‘Il mio tesoro’, full of Italianate passion. Matthew Hargreaves, whose superb Leporello resembled a lanky Dr Watson, excelled at projecting his chattering vocal lines.

Of a fine trio of leading ladies, the palm goes to Laura Mitchell, who shone as a fiery yet sympathetic Donna Elvira with singing of impressive fluency and precision. Ana James’s statuesque Donna Anna was vocally assured though a trifle underwhelming; Claire Wild was an amusingly gawky, bespectacled Zerlina. There was plenty of lively action for the excellent chorus – one of OHP’s greatest assets.

Robert Dean kept the pace up nicely, but the production unfortunately loses marks for the ragged nature of much of the ensemble: rarely a number went by without some wobbly moments, either from the pit or the stage (the overture was particularly shoddy). Proof, if it were needed, that – though ostensibly simple – Mozart’s sublime scores do not play themselves. Hopefully it was just first-night jitters, as otherwise this was a great evening, warmly recommended.