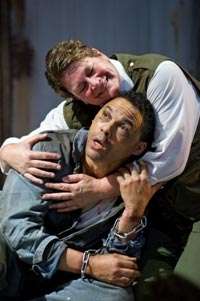 Opera Holland Park continues its 2010 season with a revival of Olivia Fuchs’s 2003 production of Beethoven’s “Fidelio”. It remains strong. The contemporary setting with the prisoners in orange jumpsuits reflecting the clothing of images of the inmates of Guantanamo Bay is still a potent one, and the evident brutalising and brutalism of both the prisoners and their prison-wardens makes the intended impression. Sometimes this has a tendency to be overplayed. Jaquino, as portrayed by Nicky Spence, is so much a thuggish, unsympathetic and aggressively jealous character that one wonders how Marzelline could ever have been enamoured of him as the text tells us she was. That being said her father’s treatment of her is not always that gentle either, and so perhaps that was the point Fuchs was trying to make. However, it was probably unnecessary to have Jaquino systematically beat, kick, punch, slap and head-bang almost every prisoner when more-random and unanticipated occurrences would make the effect just as clear and more disturbing. A few other quibbles also arose – if Rocco was the only person allowed down to see Florestan – why was he visibly beaten up by someone else at the start of Act Two.

As should be the case, Leonore dominates proceedings – if anything Yvonne Howard’s interpretation has more depth and assurance than it had when the production was new. She makes a very credible young man, helped certainly by the similarity of her uniform to that of Stephen Richardson’s Rocco. Howard has great acting ability and it is always clear when she is playing Fidelio and when she is portraying the emotional inner turmoil of Leonore. Her dialogue is also well delivered – even down to a noticeable lowering of pitch. Her high mezzo suits the huge vocal range of the part, and she has all the requisite control of line and dynamic to deliver moments such as ‘Komm Hoffnung’ and the opening of the Act One quartet with poise. 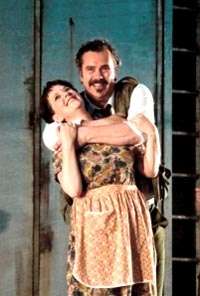 Stephen Richardson was a very strong Rocco, portraying him as a more youthful man than is customary. His warm and generous bass sounded well in the part and he too gave a detailed dramatic performance, emphasising the jailor’s moral awareness but weakness to act. I liked the flashing display of an Amex Gold card during “hat man nicht auch Gold beineben” – a moment of lightness amidst the gloom. Richardson brought out that this Rocco is also aware of a disconcerting occasional oddness of behaviour in Fidelio at moments.

As Florestan Tom Randle gave a fresh and individual take on the character, even if he did seem rather robustly healthy in the final scene compared to his self a few moments before in the dungeon. Vocally it was a sturdy performance, even if in the “Und spür’ ich nicht linde…” section of his aria at the start of Act Two he did not quite catch the almost hallucinatory or delirious quality that section ideally needs. Sarah Redgwick was the much put upon Marzelline and sang the role with bight and clear tones. Philip Joll’s imposing stature should have made him a strong Don Pizarro. Sadly he was vocally out of sorts, sounding threadbare of tone and often ill-focussed. He also lacked that streak of malevolent vindictiveness that Pizarro ideally needs. In the thankless role of Don Fernando, Njabulo Madlala managed to retain some dominance in the proceedings.

The OHP chorus was on fine form, and the men especially made a sterling contribution to their big scenes in the first act and at the end of the opera – especially given their numbers. I rather liked the way the prisoners all migrated to the patch of green grass as they emerged from the prison; a nice directorial touch. The simple and atmospherically lit set is extraordinarily adaptable to situation as well as the above-ground and underground settings of the action.

Peter Robinson conducted the City of London Sinfonia though an idiomatic and theatrically sensitive account of the score. At first OHP’s acoustic made one feel that the string tone lacked body and mellowness although one’s ears soon adjusted – but in all other respects this was excellent playing. Mention should be made of oboist Dan Bates’s memorably fluid contribution at “Und spür’ ich nicht linde…”.

One particular moment now rests in the memory – the long pause Robinson left as the prison cells were opened and the occupants emerged before the music started. In that moment of silence one suddenly became aware of the voices of children playing outside in the park. The world and life goes on while terrible things are happening to people in secret. If anything was set to jolt one into realising the serious message of Beethoven’s opera then the sound of those innocent voices ‘offstage’ surely was it.