Zandonai
Francesca da Rimini – Opera in four acts to a libretto by Tito Ricordi after the play by Gabriele D’Annunzio based on part of Dante’s Inferno [performed in an orchestral reduction by Tony Burke; sung in Italian with English surtitles] 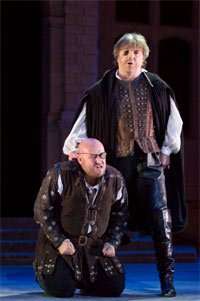 Opera Holland Park, under the direction of James Clutton and Michael Volpe, mixes the familiar with the unknown in its repertoire. This year’s season, having staged a programme of Debussy’s “Pelléas et Mélisande”, Bizet’s “Carmen”, Mozart’s “Don Giovanni”, Beethoven’s “Fidelio” and Verdi’s “La forza del destino” (review links below), comes to its final selection with “Francesca da Rimini”, a rare opera by Riccardo Zandonai (1883-1944), an Italian composer who was popular for a while and touted as the new Puccini. Having studied under Mascagni, Zandonai produced a graduation piece, an opera “The Return of Ulysses”, while another work brought attention from Arrigo Boito who introduced Zandonai to Giulio Ricordi, the celebrated publisher. Little known outside of his native Italy, Zandonai’s reputation largely rests on “Francesca da Rimini” although, as the possible successor to Puccini, he was one of the contenders to finish that composer’s “Turandot”, when he died leaving the opera unfinished. Puccini (and Toscanini) had approved the choice of Zandonai but Puccini’s son Tonio did not and the task went to Franco Alfano. Zandonai, never a particularly likeable individual, turned against Puccini, declaring him to be third-rate. But then he also maligned his own teacher, Mascagni. Ultimately, Zandonai never achieved the lasting fame of either Puccini or Mascagni.

It is doubtful whether Zandonai should still be mentioned in the same breath as Puccini and Mascagni. However, if it is to be coupled with any other composer, it is of Richard Wagner for, judging by “Francesca da Rimini” (first produced in 1914), Wagner was a great influence on the music of Zandonai – overblown, bombastic and often bathetic. The source of “Francesca da Rimini” goes back to a passage in Dante’s “Inferno” although Zandonai based his opera on the play by Gabriele D’Annunzio. Tchaikovsky had used material from Dante for his symphonic poem, a thrilling piece that has been featured in films, including Preston Sturges’s “Unfaithfully Yours” and Alfred Hitchcock’s “Torn Curtain” where it was turned into a ballet! 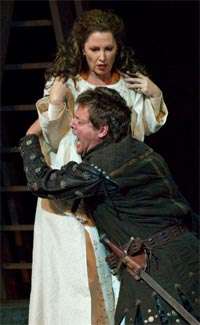 D’Annunzio’s play was a rather heavy-handed tragedy that the author wrote for his then mistress, the Italian actress Eleonora Duse. Dreary, static and unplayable as they were, D’Annunzio’s plays attracted the attention of several Italian composers such as Mascagni, Pizzetti, Montemezzi (Opera Holland Park has produced his “L’amore dei tre Re”) and, yes, Zandonai. For opera all you need is an uninteresting, verbose and over-the-top melodrama and you’re well on the road to success or at least half way there. Many of the best operas have been based on such unpromising material (think “Madama Butterfly”, “La traviata”, “Carmen”, “Turandot”, “Lulu” even). However, in choosing D’Annunzio’s play Zandonai acquired a real lulu! The plot takes much swallowing. A marriage between two warring families is being arranged. The bride, Francesca, is marrying a substitute bridegroom, the hideously deformed Gianciotto Malatesta, even though she has fallen in love with Paulo, a man she has seen but to whom she has never spoken. Paulo is now her brother-in-law and Francesca lives in Rimini with the Malatesta family. After several months of marriage to Gianciotto, Francesca is surprised by a visit from Paulo. Eventually they manage to enjoy a romantic liaison but this is discovered by Malatestino, the youngest of the family’s brothers, who has his own secret feelings for his sister-in-law. When Francesca’s husband discovers her relationship with Paulo, he plays the final tragic card.

Obviously Zandonai was influenced by Wagner’s music, in particular the narrative for “Tristan and Isolde”, as well as that other famous illicit relationship between Lancelot and Guinevere which is also evoked as Francesca reads the story to her female attendants. These scenes contrast all too noticeably with the war between the Guelphs and Ghibellines that is raging in the background and against which the romantic tragedy is played. That it never quite jells as a whole is a pity, although some of the music, Wagner-inspired or not, is impressive (albeit heard here in Tony Burke’s well-made reduction – the OHP pit is somewhat restricted and Zandonai scores for a large orchestra). The City of London Sinfonia and Philip Thomas give it their best shot, producing a vivid sound, even if some of the music itself is a lot of sound and fury signifying very little. Zandonai was perhaps better at romantic interludes and there are many touching moments between the heroine and her sister Samaritana, as they reminisce about their childhood. Apparently Zandonai was trying to create a mediaeval atmosphere in his opera and the music does indeed achieve just that sort of ambience.

Cheryl Barker is mightily impressive as Francesca, singing her socks off in an odd role that takes some believing. However, she never makes the part too fey and keeps the character grounded by her clear and forceful singing and some credible acting as a woman severely wronged for political and family motives. Julian Gavin is well-matched as Paulo, who has the thankless task of being powerless to change his situation, apart from staying true at any cost to the woman he loves. Jeffrey Black is suitably hideous as the proxy bridegroom Gianciotto, while Jeffrey Lloyd-Roberts is the epitome of evil as Malatestino, the nemesis of the two lovers’ eventual fate. Clare Shearer is engaging as Francesca’s servant Smaragadi. The other ladies of the chamber also offer some charming support in their very musical asides.

The well-drilled OHP Chorus rushed about to fine effect and presented a good sound. Were it not for the tortuous nature of the plot, “Francesca da Rimini” might well have become part of the standard repertoire. Until the mid-1970s the opera had enjoyed over two-hundred productions in over twenty countries, but now it is a relative rarity. A 1984 performance at the Met (with Renata Scotto, Plácido Domingo and Cornell MacNeil, James Levine conducting) is preserved on a Deutsche Grammophon DVD (073 4313). It’s good that Opera Holland Park revives these forgotten works, but one wishes that “Francesca da Rimini” had a book worthy enough to match Zandonai’s obviously remarkable and in its own way original score.