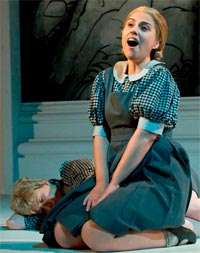 Opera Holland Park’s production of Engelbert Humperdinck’s ‘fairy-tale opera’ “Hänsel und Gretel” makes an ideal addition to the repertoire of this company and is also a competitive addition to what has been a recent glut of productions in London. The Royal Opera’s recent Christmas-time production emphasised moments of true horror – de rigueur for all good fairy-tales – whereas OHP’s offering is much sunnier throughout, with the Witch being a figure of pantomime-fun rather than a malevolent hag.

The composer’s sister Adelheid Wette presents the parents of Hansel and Gretel in a much more favourable light than in the Grimm Brothers’ fairy-tale where the mother (actually stepmother) is determined to leave the children to die in the forest and the father is weak and ‘under her thumb’. By providing other characters – Sandman, Dew Fairy and Angels – Wette also allowed her brother scope for ballet music, and there are other orchestral delights. Part of the opera’s original appeal lay in its reliance on the style of traditional German children’s songs. 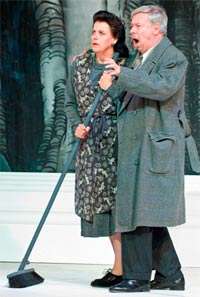 In OHP’s production, Hansel and Gretel enter through a large door wearing gas-masks and grey school uniforms – they are children of the pre-World-War-Two evacuation. Their parents could well be foster-parents in this context. The children go looking for food in the forest – sent there by their mother – but become lost. The Sandman – a Warden holding sandbags – appears and puts the children to sleep. Angels appear to guard them. As dawn breaks, the Dew Fairy – a matron figure with a bucket full of water – awakes the children who then wander off and stumble upon the Witch’s house, where they are held prisoner. Hansel is to be an ingredient in a cake. The children foil the Witch, turning her into gingerbread. Other captured children are released.

Preceded by a march of penguins, the angels’s appearance was utter joy and pure fantasy. The many children dressed in old-fashioned summer dress – straw boaters and colourful shorts for the boys – were a reminiscence of the good pre-Great-War times. The same children sang at the end and were a quietly-impressive choir. The Witch was a bizarre creation, a figure of delicious fun rather than horror. 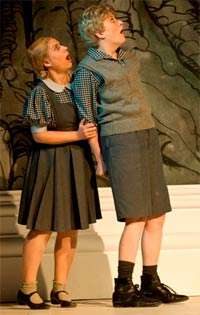 Although “Hänsel und Gretel” is perceived as a children’s opera (its two-hour length is ideal) the demands it places on the singers should not to be underestimated. Catherine Hopper’s boyish interpretation of Hänsel was superbly well-acted, finding her bounding about with schoolboy indifference to fear, though Hänsel is more than ready to acquiesce to Gretel’s sensible advice. Hopper’s singing was aptly none-too-feminine and strong, able to project beyond the often-loud orchestra without strain. Joana Seara was an entirely sympathetic Gretel, her light and tender soprano capturing Gretel’s capricious nature. The characterisation was convincing when Gretel ‘takes charge’ of the predicament the siblings find themselves in. Their ‘Evening Prayer’ was sublimely controlled, aided by the encouraging and supple strings of the City of London Sinfonia; the joy they gained from eating parts of the Witch’s house was infectious, as was their Act One dance before the appearance of their parents.

Anne Mason tackled both Mother and Witch – there is no suggestion that they are the same character. Mother is a minor part but Witch dominates Act Three, and Mason is an excellent singing actress, revelling the part and inhabiting the mischievous and devilish character with aplomb, though her direction misguidedly made her into someone one could feel sympathy for. Donald Maxwell’s Father was a jovial and reassuring presence, his booming baritone heavy at the low register and aptly paternal.

The Sinfonia excelled in the darker moments of the score through vivid tones and sinewy playing. Tranquil moments, such as the sublime brass-choir opening of the opera, lacked attention to detail, stammering rather than breathing, but the support was generally excellent, biting in the ballet music and with whimsical charm for the angels.

There is much to enjoy here. Whilst one missed true horror there is much joy to be had in the imaginative and fantastical creations on show. This one is well-worth the trek to Holland Park, though wrap up warm!