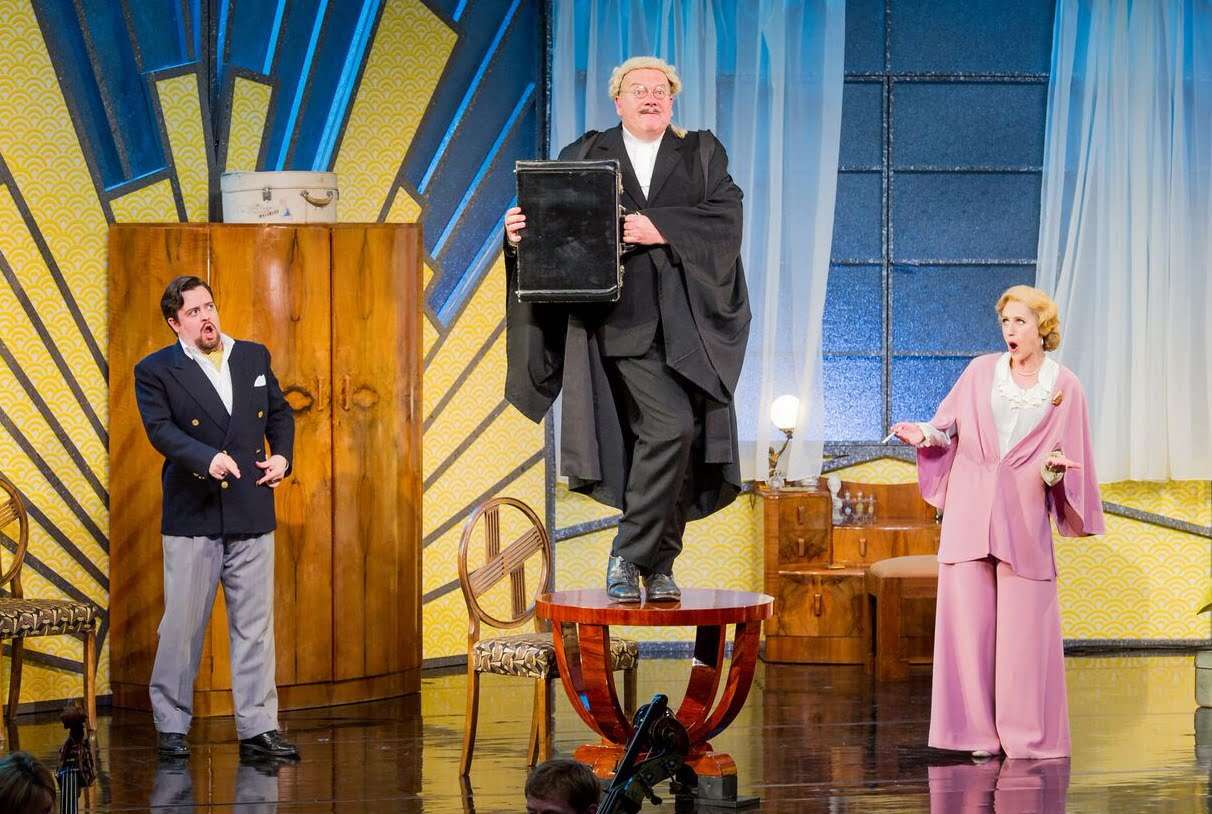 Johann Strauss’s Die Fledermaus throws many balls up in the air – French farce, ear-worm melodies, surprising forays into symphonic opera territory, not to mention a limitless supply of Freud-worthy sex-sublimating hypotheses – so it’s a miracle that it’s robust enough to withstand the heaviest of directorial hands.

Martin Lloyd-Evans, in this new Opera Holland Park staging, has pulled off quite a balancing act. He’s left all the analyzable stuff well alone, and concentrates on the increasingly surreal humour of the plot, based around the tired marriage of Gabriel and Rosalinde von Eisenstein and Falke’s game of revenge on Gabriel that left Falke stranded mid-city dead drunk and dressed as a bat, bringing in their wake mistaken identities and some gender ambiguity.

The nonsense works if you don’t think about it. Lloyd-Evans has moved the action from decadent 1870s’ Vienna to the brittle Art Deco of London in the 1930s, and very handsome it looks, in takis’s set designs. It’s an odd move to place the Eisensteins’ glamorous boudoir of the first Act to one side of the stage, leaving the other side unused, since it marginalises a good quarter of the audience. Prince Orlovsky’s party in Act Two, however, takes up the whole stage and looks sumptuous, although its removal during a “short pause” of about twenty minutes adds nothing to our expectations of the weak third Act. 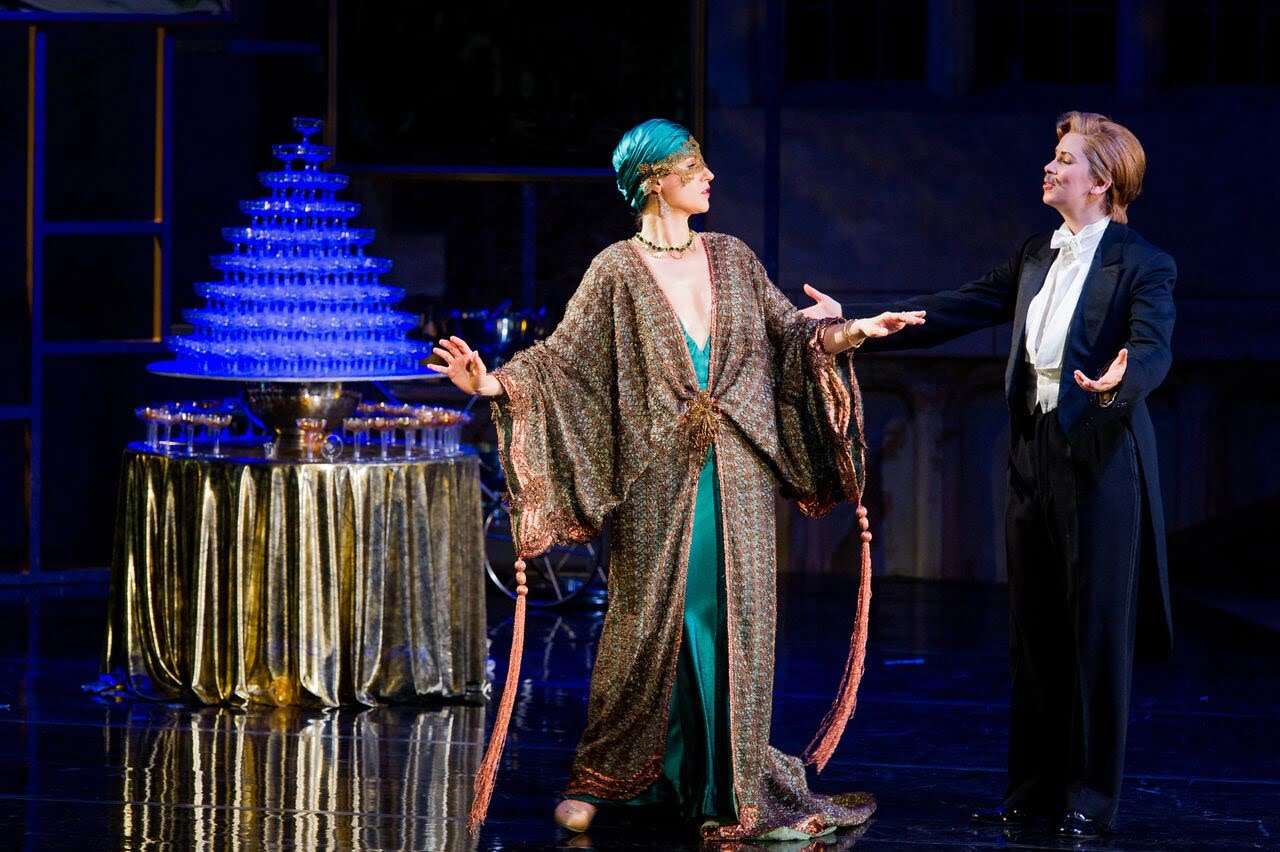 Alistair Beaton’s translation plays around with some merry word-games; class distinctions resort to the politically incorrect Eurotrash style of cut-glass received pronunciation clashing with earthy regional accents, and there are neatly mangled foreign dialects from Orlovsky and Rosalinde’s Italian lover Alfred. The occasional nod to unsophisticated Gilbert & Sullivan is subdued by a Noël Coward brand of clipped hauteur, and it was a relief when some leaden, synchronised movement from the Chorus opened out into proper dance in the ball, along with a solo spot for a saucy burlesque dancer, the ostrich-fan-twirling Didi Derrière.

The spoken dialogue, especially in Act One, was fitfully audible, rendering the move from speech into music clumsy, but the balance in Act Two was much more secure, with some sparky results. Die Fledermaus can’t avoid seeming arch and pleased with itself. Lloyd-Evans’s tight direction goes with the flow, and some overplayed slapstick and pratfalls apart, it’s all pretty vivacious. 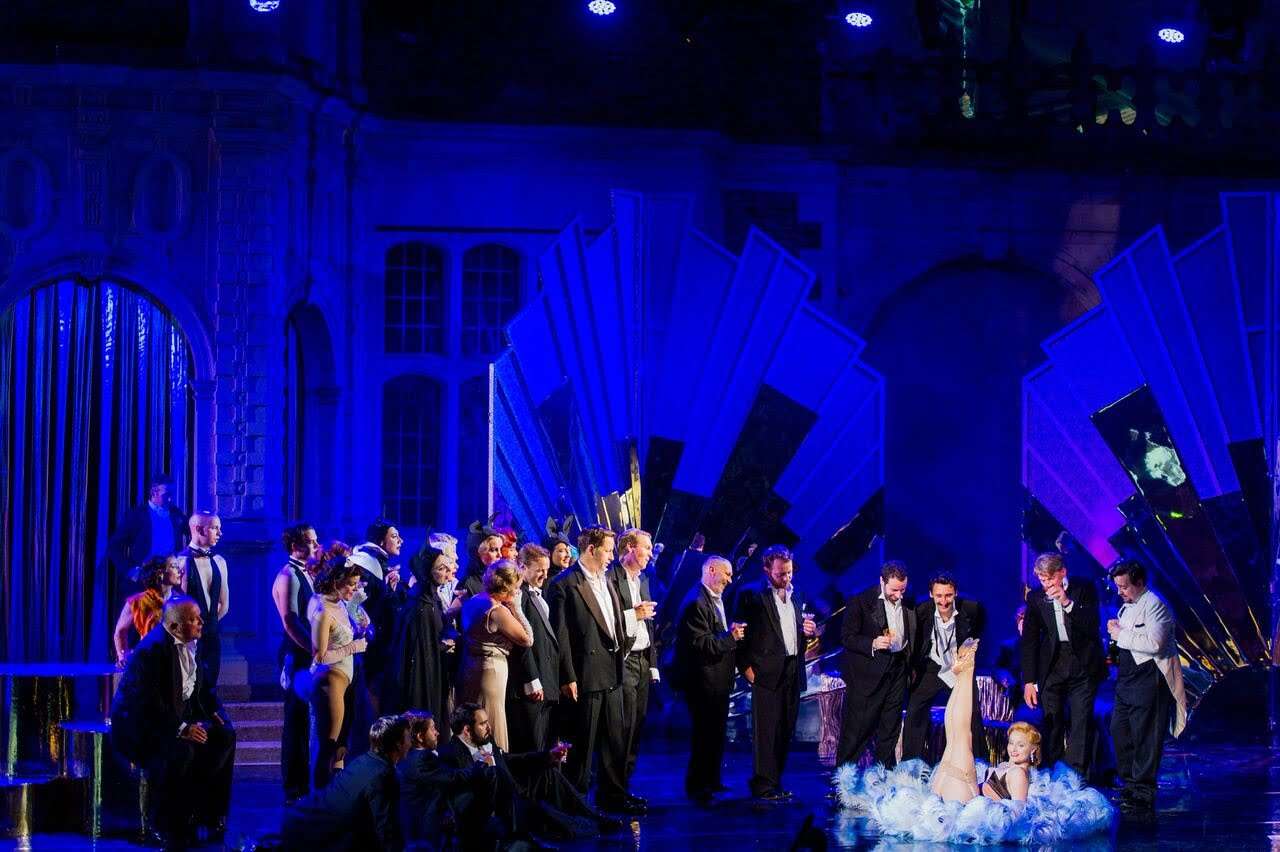 The real-life husband-and-wife team of Ben Johnson and Susanna Hurrell radiated a rather desperate chic-under-pressure as the Eisensteins – he as a feckless but smart low-life and a nimble comic; she stylish and elegant, particularly as the mysterious Hungarian countess in her beautifully sung ‘Czárdás’ – but it was Gavan Ring’s superbly sung and worldly Falke who got the plot-wheels turning so smoothly. He was matched by Jennifer France’s mischievous, adventurous Adele, the Eisensteins’ maid, whose music she sang with impeccable style and brilliance, and her double-act with her sister Ida (a fine comic turn from Joanna Marie Skillett) was a brief joy. Samantha Price was a touch too wholesome for the world-weary Orlovsky – played here as a transvestite rather than a straight trousers role, to no great illumination – who nevertheless hit her/his stride in ‘Chacun à son gout’, and she kept the second Act’s momentum bowling along. Peter Davoren played up his Italian tenor/lover caricature for all it was worth. The Frosch the Gaoler spot in Act Three didn’t outstay its welcome in Ian Jervis’s amusing dissection of current political woes.

The Chorus was magnificent in the party scene, one of the most lavishly costumed things I’ve seen at Holland Park, with singing, acting and dancing tightly directed and full of detail, including a climactic mass striptease in the ‘Champagne’ aria. From the Overture onwards it was clear how well-suited John Rigby’s conducting was for this quintessentially Viennese score, complemented by some idiomatic and lilting playing from the City of London Sinfonia.