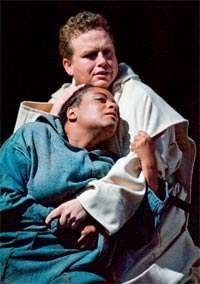 Giuseppe Verdi, having dispatched “Un ballo in maschera” into the world of opera performance, was looking forward to a rest, following, as he put it, his “sixteen years in the galleys” presumably as a slave to musical composition. Already retired to live the life of a country gentleman with his wife Giuseppina, he was, however, invited to become the deputy of the new Italian parliament in 1861. Whether this prospect appalled him more than returning to the world of opera is not known, but when the commission came to write a piece for St Petersburg, he jumped at the chance. He was given free rein to write anything he wished, although his first choice of Victor Hugo’s “Ruy Blas” was scotched as it was too overtly political for Russia’s censorship laws. Instead he settled on Angel Pérez de Saavedra’s melodrama called “Don Alvaro, o La fuerza del sino”, to which he also interpolated, just for the hell of it, a war scene from “Wallenstein’s Lager” (Wallenstein’s Camp) by Friedrich von Schiller.

Nobody ever got anywhere by examining opera plots. They are a law unto themselves and that for “La forza del destino” is one of the juiciest and possibly the silliest and least credible of the whole genre. Don Alvaro, a young South American nobleman, now (1750) living in Seville, falls in love with Leonora, daughter of the Marquis of Calatrava, who disapproves of the liaison. When they meet, the Marquis threatens to kill Alvaro, who then surrenders his pistol which goes off, accidentally wounding the Marquis, who dies cursing his daughter. Don Alvaro and Leonora are separated and Leonora takes off to a hermitage, while Alvaro joins the Spanish army under an assumed name. Coincidentally Don Carlo, Leonora’s brother, who has been seeking revenge for his father’s death, has also joined the army under another name. When Alvaro saves the life of Carlo, they become firm friends. When it is Alvaro’s turn to be mortally wounded he gives Carlos a case of documents which he says must be destroyed on his death. Having found a picture of Leonora among the items, Carlo is overjoyed when Alvaro revives, so that he can finally get retribution for his father’s death. However, during a duel they are stopped by fellow soldiers and Alvaro retreats to a monastery. Later, disguised as a priest, Carlo again challenges Alvaro to a duel. Carlo is wounded and fate takes a hand; as he dies he also claims Leonora. 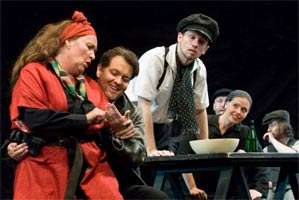 An overabundance of plot which is intermingled with scenes from the war means that “La forza del destino” is almost Verdi’s longest opera with close-on three hours of music. Only the original five-act version of “Don Carlos” (that’s a different Don Carlo, based on Schiller) has more music. Whereas it is noble of Opera Holland Park to stage the complete opera, in practice it does outstay its welcome and could do with some judicious cutting. Martin Duncan stages the whole piece very well and gets a certain urgency into the proceedings. However, this is often dissipated when the scenes involving the fortune-teller Preziosilla take the piece into another direction that leads really nowhere. Admittedly in Carole Wilson’s performance there is great panache and a lot of fun (imagine Edina from “Absolutely Fabulous” getting herself upon the wicked stage) but these scenes seem to belong to another opera altogether.

No doubt Verdi was trying to leaven the rawness of a main plot involving love, murder, revenge, camaraderie and fate, because the minor characters here appear to be just for light relief. There is a comedy priest in Melitone and the pedlar Trabuco and Leonora’s maid Curra are just ciphers to take our minds away from the tragedy being enacted elsewhere. With a chorus of forty, director Duncan and choreographer Paul Kitson turn in some splendidly assured movement of the cast around OHP’s stage area. “Rataplan, rataplan, della Gloria”, Preziosilla’s rousing paean of praise to life in the army is a great soul-stirring piece of stagecraft but it is still incidental to the main thrust of the narrative. 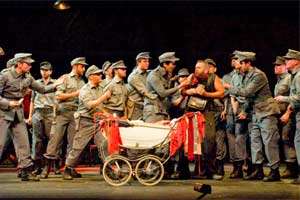 Admittedly this and several of the set-pieces have some magnificent music, Verdi at his bombastic best, which is played by the City of London Sinfonia under Stuart Stratford with all stops pulled out. It is all very bright and crisp and performed with earnest feeling, including some wonderful work by the brass and percussion sections. Vocally it finds many of the principal singers in fine ringing voice. Although Gweneth-Ann Jeffers can sound a little harsh at times, the soprano mostly held her own in the more emotional passages. Tenor Peter Auty’s Don Alvaro is sung with great strength and depth while Mark Stone as Don Carlo is every bit as impressive, and he sings with passion and verve. Carole Wilson gives a star performance as Preziosilla and there is good supporting work from Donald Maxwell as Fra Melitone and Aled Hall as Trabuco.

The abiding memory of Alison Chitty’s designs is that there are chairs everywhere, in all sorts of configurations including being suspended from the ceiling for no discernible reason. Chairs are useful for setting a scene – be it in a mansion, an inn or a monastery and they seem to be a staple requirement in many contemporary opera productions. No doubt a thesis could be written on the place (or placing) of the chair in music theatre today. Someone may even get around to writing it one day; if so, they can begin with English National Opera who lead the field in things to do with a chair.