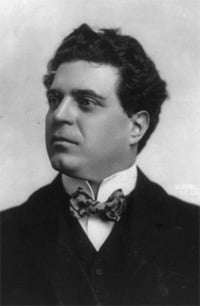 The sub-genre of Italian opera commonly (though inaccurately) referred to as verismo has been a mainstay of Opera Holland Park’s repertory almost from the outset, with numerous productions of composers whose reputation (and not just posthumously) was eclipsed by Puccini given a welcome revival. None more than Pietro Mascagni who, while he may have lacked his older contemporary’s melodic gifts, was arguably the more versatile: his sixteen completed operas cover the widest range of subjects and musical styles. A prime case is L’amico Fritz (1891) which, premiered little more than a year after his trail-blazing Cavalleria rusticana, could hardly be more removed in its deft lyricism and (for the most part) low-key domesticity.

These qualities are teasingly pointed up in Annilese Miskimmon’s staging such as relocating the ‘action’ from late-nineteenth-century Alsace to 1950s’ New York – the outer acts set in an office apartment replete with Mondrian-style décor and the central act taking place on an out-of-town ‘green-belt’ being prepared for housing development. All of which is very stylish in a functional way, as are Nicky Shaw’s module designs (nimbly dismantled and reassembled by OHP’s scene-shifters in a brief pause between the first two acts, while the audience was serenaded by a recorded nightingale) and David Thorne’s tellingly period costumes. As a melting pot of peoples and cultures, post-war New York is, moreover, an effective location for an opera in which Christians, Jews and Romanies mingle in an atmosphere of mutual support: an idealised arrangement though one which goes a considerable way to explaining the underlying contentment of this opera’s mise-en-scène. 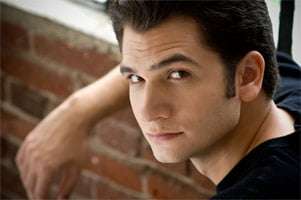 At barely 90 minutes L’amico Fritz might almost qualify for double-bill status, yet its resourcefulness whether musically or dramatically amply justifies its being savoured over the course of an evening. Thus a first Act which presents the characters and ‘situation’ in modest and slyly humorous terms, while focussing on the aria in which Suzel first unwittingly claims the attention of the confirmed bachelor Fritz; a second Act which sees their drawing closer in the winsome ‘Cherry Duet’ which has long been the opera’s calling-card, then the increasingly dramatic ‘Rebecca and Eleazar’ dialogue between Suzel and the rabbi David in which Cavalleria-like passions are for the first time unfurled; then a third Act in which Fritz’s despair over his prevarication towards Suzel is portrayed in music of almost Wagnerian intensity, countered by the revealing of David’s cunning machinations to bring the reluctant lovers together and swift final resolution in a mood of good-humoured vitality.

For all its understatement this is an opera depending largely on singers to delineate atmosphere, and in this OHP’s first-night performance was not found wanting. Eric Margiore may have appeared a little too youthful as the thirty-something Fritz, but he was as attentive to the role’s amused scepticism at the start as to the lyrical rapture and never-wracked emotion that come later – for all that a degree of strain marred his contribution to the climactic duet in Act Three. David Stephenson was alternately consoling and admonishing as the rabbi whose overtly moral take does not preclude an innate understanding of how matters need to be resolved, then steering the lovers towards their inevitable union with the right mixture of coercion and affection.

Nevertheless, it was Anna Leese who (necessarily) stole the show as Suzel – bringing an unforced eloquence to her initial aria of greeting, while proving more than equal to the vocal opulence required during Act Two (in which hers is an almost continual presence) and the expressive rapture of that final duet. Praised for her role in Zandonai’s Francesca da Rimini at last year’s OHP, Leese is evidently a singer with an international career ahead of her. Otherwise, Patricia Orr overcame early unsteadiness to portray the wondering gypsy violinist Beppe in bracing fashion, and there were lively cameos from Robert Burt and Simon Wilding as Fritz’s drinking companions Frederico and Hanezo, while Susan Young was properly doting as his employee Caterina. The chorus (its offstage contribution imaginatively ‘broadcast’ on Fritz’s radio at the start of Act Three) acquitted itself with gusto, while OHP regular Stuart Stratford secured a fine response from the City of London Sinfonia – as refined and committed as the music warranted – that featured a number of high-profile players within its ranks.

This is a production that amply reinforces the claims of L’amico Fritz to a more permanent place in the repertory and, even were this to come about, would be unlikely to receive a more probing or sympathetic production than it does here.