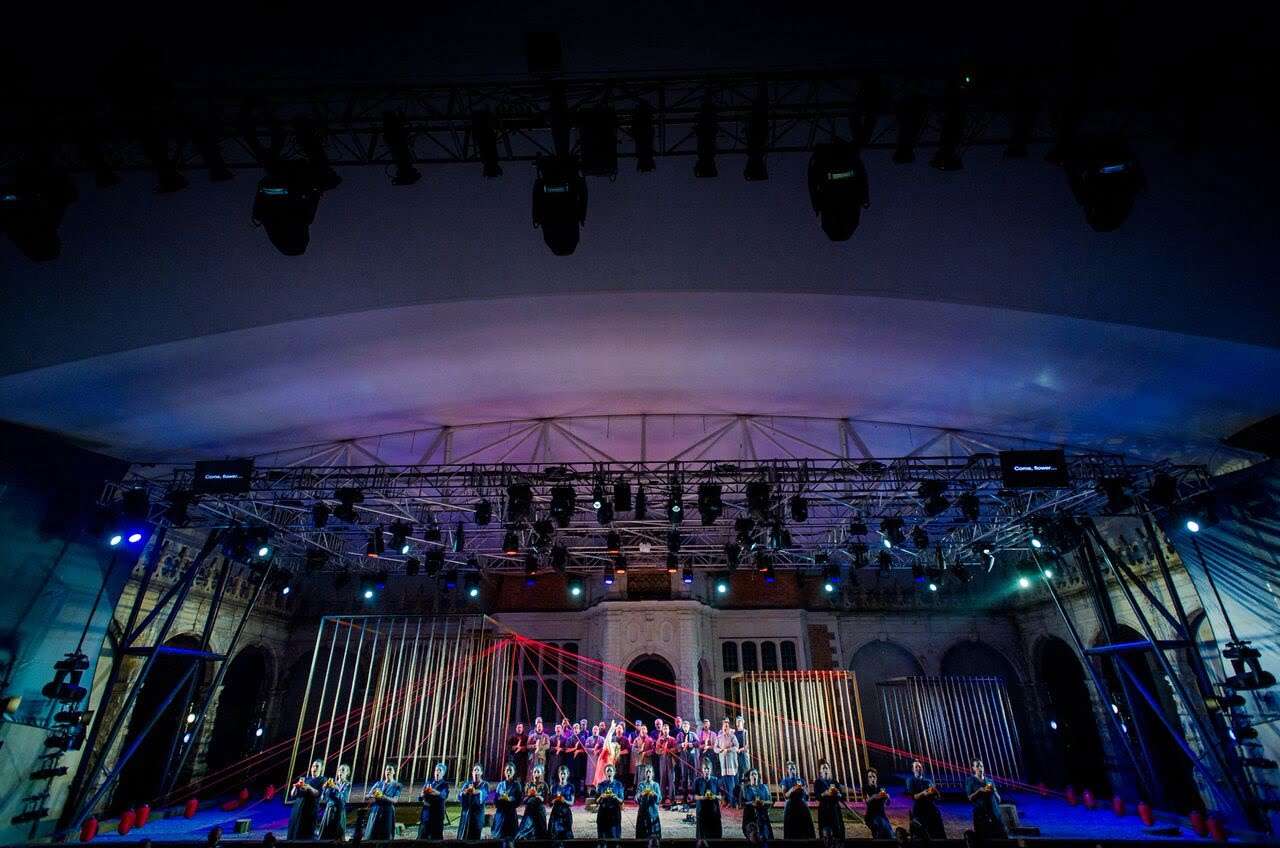 Opera Holland Park opens its doors once again for summer festivities, this time with Pietro Mascagni’s Iris, which may not have the kudos of his Cavalleria rusticana but is worth catching.

Iris was first-launched in Rome in November 1898 conducted by the composer. The story, set in ancient Japan, concerns a simple nature-loving girl who is abducted by Osaka, a milord, in cohorts with brothel-keeper Kyoto and not forgetting the connivance of a disguise and a lyrical serenade. Off Iris goes with the pair, to a place of delight, she believes. However, when there, she resists Osaka’s advances and he grows tired of her, leaving Iris to Kyoto who cares nothing for her reputation; he displays her to the community. Having left her blind father (Il Cieco), who rues her disappearance, he eventually discovers her at Kyoto’s house of ill-repute. Although he knows nothing of the circumstances, he curses Iris, and she feels disgraced, is abandoned, and endures much soul-searching. The everyday story of operatic folk!

OHP has staged Iris before, close on twenty years ago and again as a revival. Olivia Fuchs’s new production is admirably straightforward and complementary, and enjoys good lighting and costumes. There are not many operas that begin with a solo double bass, Mascagni’s expressive and suggestive music then fanning out to include the rest of the strings: a new day dawns and the locals welcome the sun with a stirring hymn. Throughout the opera the OHP Chorus was splendid. Slow-moving dancers added grace to the by-the-river scene; oh Noh I hear you say. 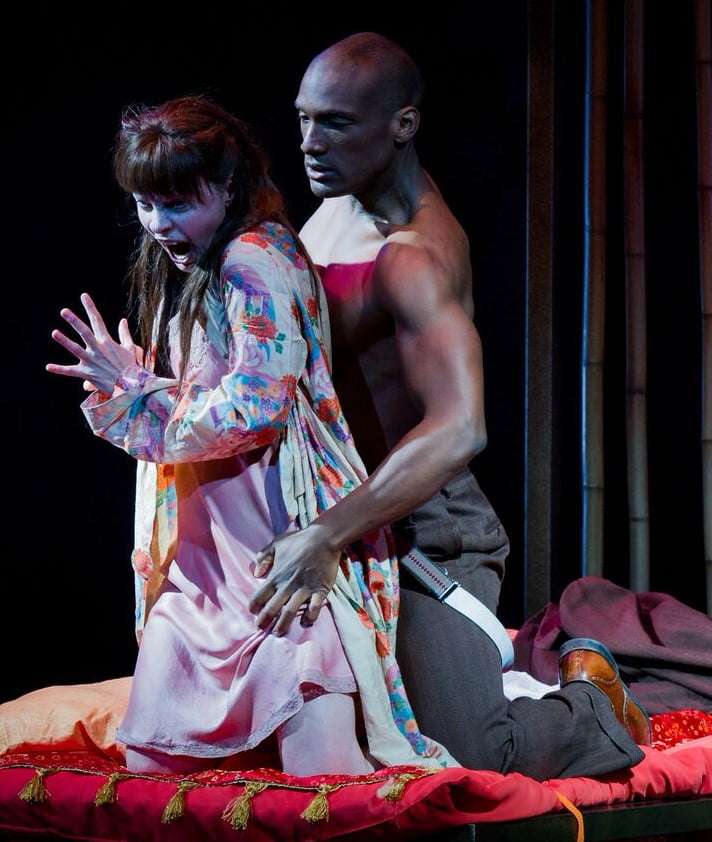 Iris, who loves her dolly and who is devoted to her impaired father, has been dreaming; rather nightmarish in fact … maybe a premonition of the horrors to come for her. An acting troupe arrives, Osaka and Kyoto have inveigled themselves as members of it and are prepared for their devilish kidnap plan; here Noah Stewart (Osaka) reveals a rich ringing tenor that will be an impressive highpoint whenever he sings, not least in Act Two when shirt-less (so my lady-friend commented, approvingly) when he is trying and failing to have his way with Iris. In the play-within-a-play section in Act One, Johane Ansell was a notable Geisha.

From several years later than ‘Cav’, Iris may be heard as being by Mascagni the confident and imaginative composer. His orchestration is superb (including the use of tuned gongs), matching the colours and fragrances of the libretto; that said, even if the opera as a whole gratifyingly avoids bathos and sensationalism, the first Act leans to expansive tedium for all that the music is pleasing, sometimes affecting, but is also lacking in ultimate distinction. In the Act’s later stages we do get additionally into the story, not least when Il Cieco becomes more and more desperate regarding his vanished daughter, as much for himself as for her: Mikhail Svetlov tugged at the heart-strings.

For Act Two, the floor is festooned with red lights – a bit too obvious this pointer – and, adding to the delusional Iris’s belief that she is in Paradise, beatific voices with harp, are heard. Kyoto shows his cruel side, Osaka is after carnal pleasure, and both men lust over the vulnerable girl. We are now getting insights into the human psyche and Mascagni is looking deeper into his arsenal of musical possibilities. There is some wonderfully melodious impassion from Osaka, but this is no love duet. There is nothing more powerful here than Il Cieco turning up to really rubbish his daughter, a savage damning of her; Iris is hurt beyond all measure; destroyed. 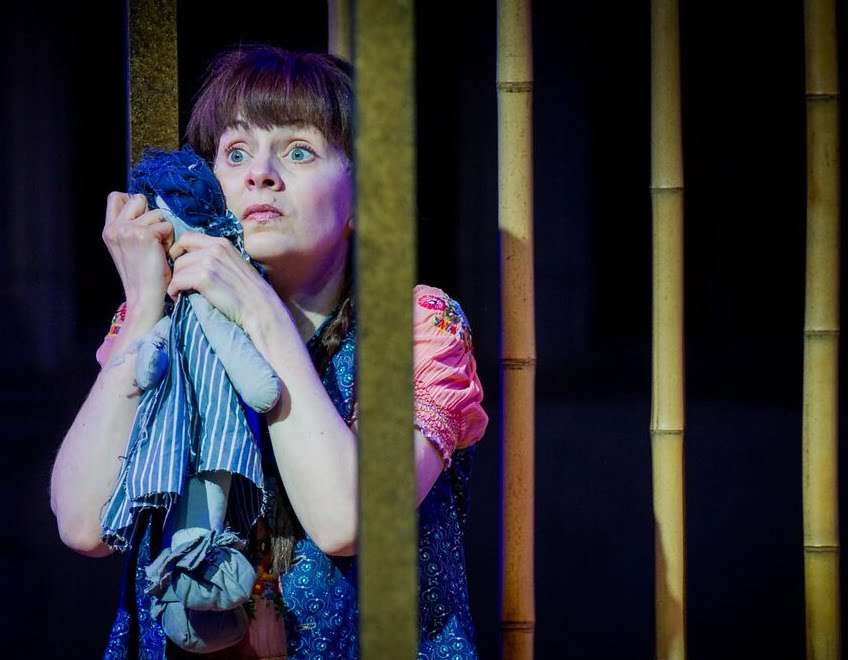 Act Three is moonlit and a time for scavengers. They find a forsaken Iris, lost to the world, full of regret and ashamed, while Osaka, Kyoto and her father take turns to comment and lament; this is quite moving. Iris asks questions of herself. Of course, night cues day and the sun is on the rise again. The final curtain, as directed by Fuchs, is ambiguous: Iris is meant to die but here responds to warming rays, and anyway Mascagni’s majestic music, presaging the end of Schoenberg’s Gurrelieder, is alive with optimism. I like to think that Iris survived her ordeal and is now thriving as a vet or designer gardener.

If there are doubts about the score – it’s not a masterpiece if full of good things – then it is put across with great assurance by the OHP crew. Anne Sophie Duprels is a very convincing Iris both vocally and in stagecraft. Stuart Stratford has the music at his fingertips and for the most part the City of London Sinfonia (as large as the orchestra enclosure allows) played with panache and exuberance – some first-night infelicities will be ironed out – and overall Iris the opera is well-worth catching, and it’s rare.