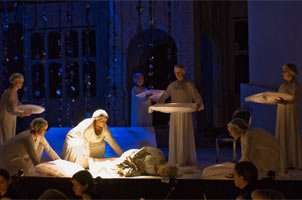 The English are a determined lot! There was a definite feeling of stiff-upper lip at Opera Holland Park on this first-night of this remarkable early-twentieth-century masterpiece did battle with the elements. It may well be a summer opera festival, but Mother Nature was determined to quite literally put a dampener on proceedings. Not only had cast and orchestra have to contend with screeching peacocks (Golaud’s line translated as “I didn’t know I was hunting in the forest” got a distinct snigger), they had the added fun of heavy rain and temperatures damp and cold enough to have the audience burying itself under coats, shawls and blankets. Perhaps someone should have a word with the staff at HPO too – ‘officious’ is one word that comes to mind, ‘downright rude’ might be a couple of others. It might also be a good idea not to assume that every member of the audience is a regular visitor; putting up signs up saying “Footpath Closed” is fine, but the odd sign saying “Opera Theatre This Way” would be helpful too. Trudging around Holland Park in the rain looking for an entrance isn’t a good start to anyone’s evening. 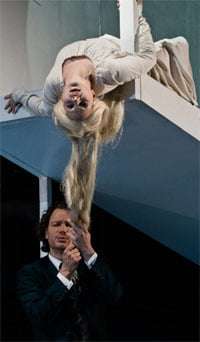 “Pelléas et Mélisande” is always a risky undertaking and OHP should be commended for staging this, its first-ever production of, sadly, Debussy’s only completed opera. There were many musical qualities to savour, which to the performers credit did not seem to suffer from some of the more clunky and pretentious aspects of the production. It can’t be easy to design a set for an opera in a large tent and Yannis Thavoris on the whole goes for a naturalistic look – impressive castle in the background and three large white blocks with various levels that doubled as the well in which Mélisande loses her ring and rooms and dungeons of the castle – all in their own way believable. However, the cascading bits of silver towards the rear of the stage didn’t seem to add a great deal, reminding one of John Lewis in December rather than anything to do with the story.

Also, I wonder when designers/directors will realise that singing any opera, let alone one as tricky as this one, isn’t made particularly easy by having bits of scenery that move around when you stand on them, together with narrow ledges and steep ramps that need careful negotiation – the singers managed magnificently but there was no mistaking the odd worried expression as they literally felt the ground move beneath them: Maeterlinck’s story has enough symbolism of its own without having anyone upload more. As we got to the last of the twelve scenes I suspect that I wasn’t the only one who had had enough of the pillow-waving maidens either – strong maidens as they also doubled as scene-shifters and, most bizarrely, the sheep that frighten Yniold in Act Four – but for the most part they just cluttered up the set trying to look decorous and made the piece clunk along in a way that was at odds with the conductor’s efforts to keep the piece moving. Most of the characters were clearly imagined, although Mélisande seemed to be rather more-worldly and something of a ‘tease’ than the mysterious, delicate figure that playwright and composer had imagined.

As far as the cast is concerned, Alan Opie’s Golaud was the triumph of the evening. He commanded the stage at every level and the transformation of this deeply flawed character from smitten lover to jealous bully was disturbing, pathetic and tragic – what a remarkable singer and actor he is. The Danish tenor Palle Knudsen was a handsome, ardent Pelléas, only loosing some of his ardour in the climactic final scene of the penultimate act when he finally confesses his love for Mélisande, the only time in the whole evening that singers appeared to be fighting against the orchestra. In the smaller roles, Brian Bannatyne-Scott was a deeply touching and noble Arkel and Anne Mason made much of her brief but telling appearance as Geneviève. The young Eoghian McNelis was a remarkably confident Yniold – perhaps a little too confident and a little too old, for he looked as if he could hold his own against his domineering father rather than shrinking away in terror.

Unfortunately, Anne Sophie Duprels’s Mélisande wasn’t of the same standard. Although she was born and studied in Paris it is bizarre to report that her command of the French language and its projection was the least convincing. Although with stage presence and looking every inch the delicate, frightened Mélisande, the silvery voice one might have expected never came and she struggled against direction, clinging on to what little charm was left to her character

Brad Cohen had a firm grip of the score – alert to its ebb and flow, every shifting colour and breath, and never once did he allow it to sag or lose momentum, which in an Opera House would be an achievement, but in these circumstances was nothing short of remarkable. He is an undemonstrative conductor, never getting in the way, giving singers and orchestra a great deal of freedom, but also very much in control. Many plaudits to the City of London Sinfonia, which although smaller in number than we might expect in this work (at least as far as the string sections are concerned) gave some truly ravishing playing – wrapped up in coats and finger-less gloves too!

One can only hope that both audiences and Mother Nature are supportive of OHP’s brave venture as the run progresses.