These performances of Donizetti’s “Roberto Devereux” at Opera Holland Park are a sell-out with Richard Bonynge conducting.This year’s rarity, “Roberto Devereux”, has hardly been performed in the UK. London first got it in 1841 and in living memory there has only been a concert performance by Royal Opera, a few years ago. The composer wrote so many operas and yet most houses still only produce the really popular works.

The man of the opera’s title was the second Earl of Essex who was unsuccessful in beating the Irish for his Queen, Elizabeth. He is being threatened with treason. Donizetti and his librettist invented another couple, the Duke and Duchess of Nottingham, and throw the four of them together in a sort of soap-opera plot. Essex is also the lover of Sara, the Duchess, to whom he has given Elisabetta’s ring as a love token; Sara gives Essex a blue scarf in exchange for it. When the scarf is discovered on Roberto, the Duke recognises it as his wife’s, so is out to wreak revenge. This comes when the Queen challenges Essex with the scarf. He is sent for execution while Nottingham tries to prevent his wife from returning the ring to the Queen; but when she does it is too late as Roberto is already dead. Elisabeth goes mad and, haunted by his ghost, abdicates. 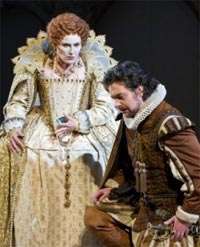 It is a plot that has only a perfunctory bearing on the history or politics of the time. Under Richard Bonynge’s clear and unfussy direction the orchestra plays the attractive score with a deal of panache and brio. As Elisabetta, Majella Cullagh is sturdy rather than grand but manages the bel canto writing with aplomb. Her final scene is a great feat of stamina – it is a fairly lengthy one in which she has to wander about clutching at her head losing her mind and finally, with a flourish, ripping off her wig and laying herself bare, a broken woman with a broken heart.

Cullagh is well partnered by Leonardo Capalbo as Roberto. Their voices fit well together and his is strong one and he is a commanding presence. Yvonne Howard as Sara suffers well at the hands of the two men in her life. She has a definite sense of style. Lindsay Posner’s production is serviceable with a nice wide space that also includes a water-feature that looks regally handsome in Peter McKintosh’s solid black and white checked designs lit by lanterns and candlelight. This is a really good start to what promises to be another successful season for Opera Holland Park.