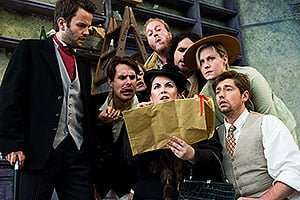 This was a special matinee performance at reduced prices of this double-bill, given on the last Saturday of the run, in which all the roles in Gianni Schicchi, with the exception of the title-role itself, were played by a cast of promising young singers, sponsored by the Christine Collins Young Artists Scheme. The intention was for them to perform the same production by Martin Lloyd-Evans as the main cast and the latter sent his Associate Director, Oliver Platt, to direct rehearsals. Zanetto took its normal place at the start, unchanged, though conducted by Matthew Waldren, as was the Puccini work.

Those young singers’ experiences of preparing for their big chance is recounted in a blog. This one, written by Maud Millar through the rehearsal period of the “junior” cast, is most revealing. She confides the secrets of each singer’s notion of his or her character, starting with her own. Each is provided with a back-story. In her account of Week Three in the rehearsal the blocking had been grooved in and it was time for each performer to invent their own comic business. She admits that the characters had grown into caricatures and that “everyone is constantly looking for little way to out-funny everyone else”. However, It is not clear how these characterisations, ideas for gags and stage business can have been co-ordinated with those of the first cast in what was supposed to be the same production. I can only assume that different production details must have been generated by the two sets of singers within the overall common production design set by the director Martin Lloyd-Evans and passed on by his associate. As an insight into the birth and growth of a production through the rehearsal period the blog is valuable, particularly as it is written by the youngest member of the cast. 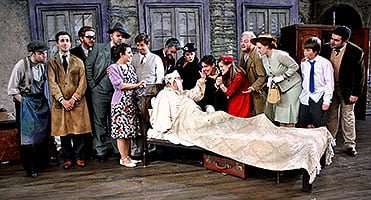 If, as she implies, much time and effort was successfully devoted to the blocking, then it was well spent. Surely the greatest benefit the young singers could have gained from preparing and performing this opera was to be wheels in an ensemble machine, for there cannot be many operas which have so many ensemble episodes per minute of music as this. The members of the Donati family sometimes act in consort, at others they must react simultaneously as individuals. As Schicchi revealed the details of his plan the rest of the cast moved in step with him, hanging on his every word, culminating in a unanimous, choreographed dance of joy after he finished. Later the moment when they ganged up on Simone was really quite disturbing. Sometimes certain characters stood out from the crowd, as for example when the self-important Nella pushed her way to the front of the queue to hear Schicchi’s intentions or when each of them approached him with their separate bribes to exchange for their chosen legacy.

The demands of the deception necessitate a deal of comic business. The attempted jamming of the doorway to the doctor was hilariously managed and both he and the notary provided little comic cameos. There was rather less play with things such as the handless sleeve than I expected. One gag that was certainly overdone was the hurling around of a live model Buoso as if it were a dummy. To compensate for that there were several more subtle ideas: the dressing of Schicchi by Nella, Ciesca and Zita had more than a hint of suggestive eroticism in it.

Some of the young singers showed the presence of more stage experience than others. Aidan Smith did much more than make a mere caricature of a drunk in the part of Betto. Well-costumed, he moved convincingly and made the words of his occasional solo contributions tell. The voice is cleanly focused and characterful. He gave signs of what he was thinking, too. He took a notably minority position vis-à-vis Rinuccio’s aria: while others showed embarrassment at the young man’s tribute to the broad-mindedness of Florence or ignored it, he risked opprobrium by clapping in agreement. Conversely Timothy Dickinson as Simone seemed not yet to have learnt to walk like a 70-year-old.

Vocally the strongest performances tended to reflect the best dramatic ones. Laura Woods made much of Zita’s tirade against the nouveau riche and carried most of the family members with her. The dark colour of her voice was matched by that of her matriarchal costume. Christina Petrou cut a sympathetic figure as Lauretta, though her voice was arguably half-a-size too small in the aria and final duet. As the other lover Adam Tunnicliffe seemed not in best voice, somewhat dry of timbre and needing to stretch for his final B flat in the aria.

Alan Opie made a grand entrance with trilby hat and cigarette, full of obvious contempt for those who had summoned him: Zita’s humiliation was obvious at having to enlist this brash country-dweller. However, he audibly melted at the pleading of his daughter. Though now in his early-sixties the baritone’s voice is entirely intact. How well he has timed the development of his career. His young colleagues could learn much from his command of stagecraft here, though he generously avoided dominating them vocally.

Matthew Waldren encouraged the City of London Sinfonia to deliver its contribution to the coruscating humour as well as to the sentimentality of the piece.

The search for a companion-piece for Gianni Schicchi if, as is often the case, managements shy away from presenting Puccini’s triptych in its entirety, has produced varied results. Nobody as far as I know has previously thought of pairing it with a work which has the common setting of Florence. I enjoyed the virtually continuous lyrical lines of Zanetto, which this extended scene is constructed. The changes of mood in the musical paragraphs and the instrumental colourings which accompanied them were allowed to register without undue haste. In contrast to the Puccini piece Matthew Waldren conducted what amounted to a chamber orchestra with restraint and refinement.

Janice Watson is a much-travelled lyric soprano with major roles up to the softer Wagnerian heroines, so it was a coup for OHP to be able to engage her to prepare and perform a part which she is unlikely to sing again. Watson’s voice was never stretched and she was moving in this Rosenkavalier-like situation of a budding relationship between an older woman and a dashing young teenager which has to end in renunciation. If anything, It is Zanetto who has the more interesting music and the producer emphasised the Bohemian nature of this teenage minstrel who says that he likes to hover like a firefly on the breeze and arrives in the rich widow’s mansion by breaking and entering. Patricia Orr projected a strong personality, looked the part en travesti and sang in a rich, warm mezzo which allowed every line of the twee libretto to be heard. Hers is a career on the rise. The same cannot be said of the work, for which there is no realistic place in the repertoire except as a curtain-raiser programmed by an enterprising organisation such as OHP.

Christine Collins was thanked at the final curtain for her sponsorship. I imagine she and OHP will hope to repeat the exercise.