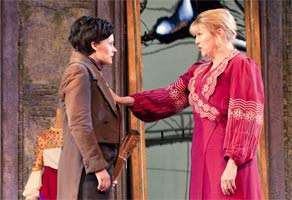 Both of these operas are new to Opera Holland Park. Zanetto is a real rarity. It is well-worth discovering. First performed in 1896 in Pesaro, Pietro Mascagni had already made his claim to fame with Cavalleria rusticana (at OHP next season with its old soul-mate Leoncavallo’s Pagliacci). Zanetto is more-Classical, less-verismo than ‘Cav’, a two-hander conversation piece. Ideally it needs a smaller and less-noisy space than OHP provides; nevertheless this well-judged without-artifice production makes a strong case for the piece’s revival and opens up our perception of this composer’s abilities. (OHP has done well with Mascagni – L’amico Fritz was a delight last year.)

Over 45 minutes, Zanetto tells of an encounter between a beautiful courtesan (OHP’s website description; Silvia is portrayed differently elsewhere – not least in the synopsis provided by the composer). It’s easy to judge books by covers, but often the pages tell a different story. Clearly Silvia is admired by the gift-bearing men-folk, but not one of them means anything to her. However, she does seek genuine love. We are in Silvia’s boudoir, opening stage-business played out to a chorus mysticus from afar (unexpected, non-credited, and even maybe anomalous to the score – but these opening voices are indeed part of Mascagni’s conception). Enter a young man. And what an unusual entrance – Zanetto (in the circumstances, a curious ‘trouser role’) literally breaks in! A wandering minstrel who leans towards vagrancy! 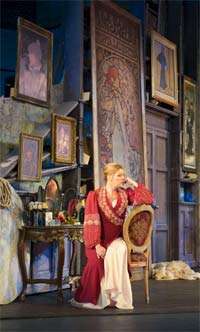 There’s an attraction between these two people, more so from Silvia (is he the one?), but Zanetto, the guitar-carrying bard, seems more interested in having a home and an older sister. He seems to know of Silvia (after all, there are posters of her within his sight – let’s make her a leading actress) and is searching for her. Totally unconvincing then that he can’t work out that he is in her presence! Although she never reveals her name. Ultimately it’s a fleeting meeting; proto-romance, yes, but it’s a coming-together of mature experience and youthful enthusiasm that eventually finds the vagabond back on the road and Silvia remaining tormented. Her glance into a mirror to see her younger self is a visual parable about the perils of time passing.

Nevertheless, if relationships matter, be it their joys and their pains, then the storyline of Zanetto will touch the heart. Janice Watson (a soprano) is wonderfully cast in performance and vocal terms: an entirely believable ‘older woman’ of great attraction and with a captivating singing voice. If a tenor would bring more realism for Zanetto himself, then Patricia Orr (a mezzo) looks the part of a young man, and she is also vocally likeable. Voices intertwine delightfully. There may not be a ‘hit’ aria or duet, but the music is consistently lyrical and eloquent, sensitively conducted and played here. Zanetto (the opera) is not a tearjerker, it goes deeper than that; get on its wavelength and it proves a lovely discovery. It just begs the question, Who is Silvia, What is she? 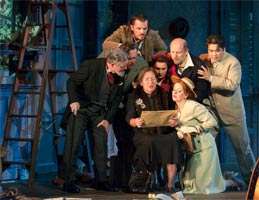 No worries about a lack of a showstopper in Gianni Schicchi (the closing opera of Puccini’s Il trittico). Lauretta (Schicchi’s daughter) gets to sing ‘O mio babbino caro’ (one of the most emotional of arias!). How could anyone resist Anna Patalong’s sweet and imploring entreaties? Her father can’t, and neither could Holland Park’s resident peacocks, honking their appreciation (OHP and sound-proofing are strangers!) as this highlight faded to its conclusion. I’m afraid though that your reviewer (normally a jolly chap with a great sense of humour) sat stony-faced through this one – not a titter let alone a belly-laugh. Played too obviously for guffaws (which it gets, in spades), this over-farcical production is singularly unfunny, the music held-up for far too long at the beginning with a surfeit of irritating groans from the dying Buoso. I liked the fully-working grandmother clock though.

Musically, things are better, if not resisting brickbats. Manlio Benzi conducts well-enough (with a good response from the City of London Sinfonia – OHP’s stalwart ‘house’ orchestra) but some tempos are sluggish, debilitating the jesting that is written into this ingenious score. The singing is generally fine for this mostly ghastly vulture-like collection of relatives only interested in their inheritance and not above conspiring to re-write the Will to get their wants.

Enter the wily Gianni Schicchi, several steps ahead of this motley crew. He has only himself and his daughter (and her betrothed, Rinuccio) in mind. Alan Opie is a charismatic Schicchi, a notable assumption, and in addition to the eye- and ear-catching, very persuasive Patalong, Jung Soo Yun, although a touch ‘can belto’, is vibrant and likeable as Lauretta’s lover. They enjoy an ardour-filled verandah moment towards the end (well staged) and Opie ensures that Schicchi’s final speech (to the audience) gets him off the hook. No jury would convict!