This is a revival (the same forces sung with Esa-Pekka Salonen in 2015) and these productions still leap off the page, the music as vital as the day these scores were written. Here Ingo Metzmacher takes the helm, eliciting refined sounds. His control of dynamics is impressive, allowing the music to speak directly, gently hinting at the Hungarian folk melodies Bartók uses within, and ensuring the words at all times lead the action, as the music unfolds with its trademark minor-second intervals and a palette of shimmering sound and colour. In Voix humaine, the orchestration is significantly pared down, such that the harmonies are often more like gossamer Debussy than spiky Poulenc.

These two operas may seem unlikely bedfellows, but here they are effectively yoked together by violence and meld into one remarkably coherent quasi-Wagnerian psychosexual drama, with set-design, lighting, text and music working together in startling alchemy. Scraping away with a cold-steel scalpel, Krzysztof Warlikowski reveals in both pieces the unadorned destructive force of unquenchable physical and mental attraction.

In the ‘Prologue’ to Bluebeard, John Relyea appears as a magician, charming us in his beguilingly-virile bass-baritone voice – here is a man whose every gesticulation must be obeyed, quite literally as a spotlight falls on Ekaterina Gubanova sitting in the audience. Bluebeard gestures and she obeys, making her way around the orchestra pit to join him. At each turn we are complicit in engaging with discombobulated symbolism. In the Stoppard-like trick of the curtain rising to reveal another auditorium reflected back, are we watching the stage, or the stage us? Are we passive spectators, or actively involved? Is this drama unfolding inside our heads? For once such mind games are cogently and naturally presented. 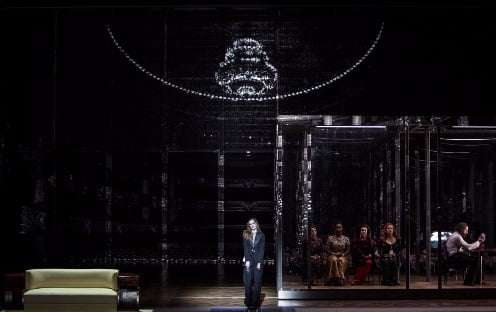 Gubanova’s darkly-hued voice connects ideally with the role of Judith, who – in this production at least – is a woman physically as well as psychologically in thrall to Bluebeard. She gives all of herself as a woman in order to know him, only occasionally fortifying herself with drink. Her massive reserves of power make for thrilling moments, not least when hitting the top-C with the opening of the fifth door. But whether the torture chamber, the jewels, the vast domain itself, all is blood-soaked and Gubanova’s often-understated voice, with its velvet timbre, conveys its own horror without over-playing.

Relyea’s Bluebeard is no pantomime villain, but rather a real, tortured and even vulnerable man; his singing is ever-sensitive, soft-grained and he sung to Judith rather than into the auditorium. As the seventh door opens, Bluebeard’s previous wives are revealed not to be dead, acting out some fantasy of the captive, kept woman. Bluebeard revels in their touch, their beauty. It’s an uncomfortable intensely dark male money/power fantasy that would keep Camille Paglia busy for a decade.

It is an artful decision to add huge projections, taken from Jean Cocteau’s La belle et la bête, reminding us that a grotesque fairy-tale from the collective unconscious lies at the heart of the Bartók; and cleverly they link us also to the Cocteau libretto of La voix humaine. 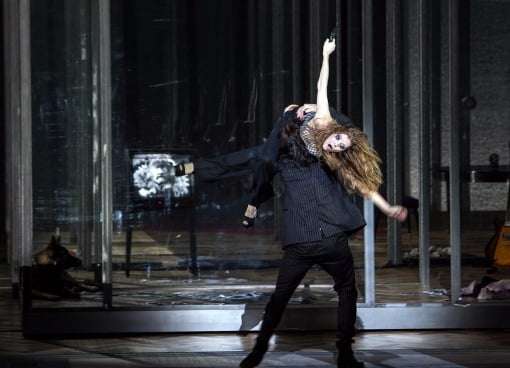 It would have been philistinism to have stopped for an interval. Indeed the ‘dissolve’ from the end of Bluebeard to the beginning of Voix humaine is as fine and bold a moment in the theatre as I have seen (notwithstanding a few gasps from some audience members, on whom it was dawning they were not to be let out). Barbara Hannigan appeared at the end of Bluebeard, presenting herself half-sacrificially, half-innocently, as the next victim, walking awkwardly on her high heels (drunk or drugged, or merely struggling in uncomfortable shoes?), and walking into the next set, with an objectifying overhead camera forcing us to gaze at Elle’s physicality as her crumpled body is shown across the stage, a woman in pain, emptying her mind.

So, another woman in agony, her heart ripped out. Such a large venue may not seem the best place for this most-intimate of domestic dramas – a woman speaking into a telephone with the most-daring step being to dispense entirely with that iconic symbol. The final moment in which Hannigan puts the barrel of a gun into her mouth was chilling, and rooted in a truth of the human condition, when individuals dare to feel to such extremes, Hannigan slumping onto the art-deco sofa, and we all felt an icy connection to a communal truth – the recognition that each day someone, somewhere, kills for love.

How beautiful, how refined, Cocteau’s text is. Poulenc is a miracle word-setter but in this production it is Warlikowski who rubs our noses in the meaning within. In her element Hannigan judges climaxes perfectly; often she is comparatively restrained though her restless gut-wrenching nervous tension, inducing both pity and terror, is sustained throughout. Only in her cry of “je deviens folle!” does she let rip – an unforgettable moment of theatre. Probably no-one can displace Denise Duval as the definitive Elle, quite unsurpassable in her Gallic femininity and her diction, now seemingly from a bygone age. But nevertheless Hannigan fully deserves her place as an Elle for the new century.