Weinberg
The Portrait – Opera to a libretto by Alexander Medvedev, after Nikolai Gogol [UK premiere; sung in an English translation by David Pountney & Anastasia Koshkina] 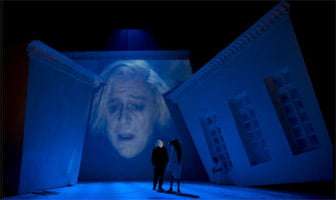 Although his music has rapidly been making its mark over the past decade (mainly through recordings but increasingly in concert performances), the eight operas of Mieczysław Weinberg (1919-96) were an unknown quantity in the West until “Lady Magnesia” received its concert premiere in Liverpool two years ago. The real breakthrough, however, came at Bregenz only last year – when both “The Passenger” and “The Portrait” were given to much acclaim. UK audiences will be able to see the former (which Weinberg considered his masterpiece) when English National Opera mounts it at the London Coliseum early next year, but all credit to Opera North for setting the pace by bringing the Bregenz production of “The Portrait” to Leeds and then other locations – so providing the first opportunity in the UK to see an operatic output that may prove to be Weinberg’s defining achievement, as well as that of post-war Soviet opera as a whole. 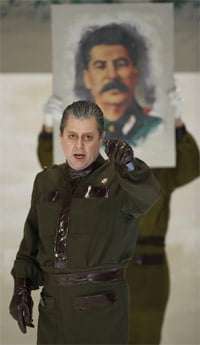 Polish-born but resident in Moscow from 1944 until his death, Weinberg was slow to tackle a medium such as his mentor Shostakovich had all but abandoned in the wake of the “Lady Macbeth of Mtsensk” debacle, though his extensive output for theatre and film ensured he was no novice when it came to opera in the late-1960s. Indeed, “The Passenger” was to be followed by seven further operatic works over the next two decades, not all of which reached the Soviet stage. “The Portrait” first saw the light of day at Brno in May 1983 and this staging is a co-production with Opéra National de Lorraine that throws a striking, if not wholly plausible, light on a resourceful adaptation that enabled Weinberg to display his highly expressive eloquence through the economical yet potent immediacy of his mature idiom: in the process, Gogol being not so much reinvented as re-energised for the Soviet era in its late phase.

Formally, the opera is an astute amalgamation of through-composed and genre-type numbers such as allow for character development as assuredly as musical evolution – resulting in an overarching momentum that amply sustains itself across the two-hour whole. Elements of fantasy embodied in the framing figure of the Lamplighter, and farce represented by the artist’s overbearing clientele, are balanced by the gradual evolution of Chartkov himself from poverty via decadence to dissolution – a ‘progress’ duly underscored by the responses of those around him as well as, crucially, by the silent idée fixes of the Muse and the Portrait (represented in this production as a broken mirror, which endows a viable abstraction on its presence within the opera while arguably missing the point in terms of the drama’s denouement, for all that its climactic destruction lacks nothing in theatrical impact) which, between them, embody his transformation from artist to careerist. Not only is the drama most intense during the final stages but the music itself is at its finest – melodically devoid of contrivance and tonally subtle in a way that eludes most ‘mainstream’ opera of the last half-century. 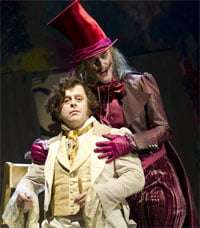 For much of the first two acts, the staging is restrained by David Pountney’s standards – countering the relative austerity of the setting with elements of whimsy and burlesque that emerge naturally from the musical content. Dan Potra’s ‘paint-board’ set is as enticing visually as are his costumes for the larger-than-life persons of the St Petersburg nouveau riche who flock to Chartkov’s studio on the basis of a portrait by another and whose literal outpouring of money enables him to purchase any amount of critical eulogy. Whether such indulgence warrants his transformation into an Andy Warhol cipher, sinking into Damien Hirst conceptualising, in the final Act depends on whether one interprets Pountney’s treatment as insight or obfuscation; redeemed, if the latter is thought to be the case, by Linus Fellborn’s lighting which unerringly ‘illuminates’ Chartkov’s decline as well as Weinberg’s music.

The cast was never less than dependable and often impressive. Not least Paul Nilon, who here met the often high-lying tessitura of Chartkov head on; capturing the artist’s initial yearning for material as well as spiritual fulfilment as surely as his increasingly manic despair as he realises the extent of his self-betrayal. Such an occasionally raw though always eloquent assumption overrode the dubious projected images favoured in the climactic scene to confirm this among the most rounded of modern tenor roles. Richard Burkhard was sympathetic as the long-suffering Nikita, Peter Savidge balefully persuasive as the Professor who urges Chartkov to honour his vocation as surely as the Art Dealer who encourages him to trash it. Among the smaller roles were lively cameos by Carole Wilson and Katherine Broderick as her deformed charge; Helen Field made a brace of rewarding appearances and Richard Angas was boorishly unnerving as the General, rendered here as a Stalin whose preference for obedience over genius made him the most implacable of patrons. Nicholas Sharratt impressed as the Lamplighter whose reassuring presence is gradually but cruelly undercut by the opera’s close.

Especially affecting touches were Fiona Slominska’s flautist, whose wistful vocalise emerged out of and back into the musical fabric as thoughtfully as Hedda Oosterhoff’s silent Psyche (subject of an unfinished painting) appeared to remind Chartkov of his error: images combining in an evocation of the Muse that haunts the artist the more he eschews its altruism. The opera was incisively though sensitively conducted by Rossen Gergov, continuing his advocacy from Bregenz (and who is presumably responsible for several small cuts) and also securing a committed response from Orchestra of Opera North. It set the seal on a staging that, while it may not prove the most satisfying treatment of this always-relevant subject, was never less than provocative in bringing Weinberg’s penultimate stage-work to life: gripping, sometimes frustrating but enthralling and, all in all, required viewing.