“Parisina” or “Parisina d’Este”, received its première on 17 March 1833, its leading roles taken by Carolina Ungher and Gilbert Duprez. Duprez went on to create Edgardo in “Lucia di Lammermoor” and Fernand in “La Favorite”. The story is one of those, beloved by opera composers, in which certain relationships are hidden. Thus Parisina, who is the second wife of Azzo, a nobleman, loves Ugo. One knows from that alone that the ending will not be a happy one. Azzo discovers Parisina’s feelings for Ugo and sentences the young man to death, refusing to change his mind even when it is revealed to him that Ugo is his son by his first marriage.

In line with other bel canto operas, “Parisina” is built on recitatives, arias, duets and ensembles, thus creating much scope for the voices, although Donizetti, because Carolina Ungher did not possess an extensive upper range, kept the soprano away from dizzy heights. 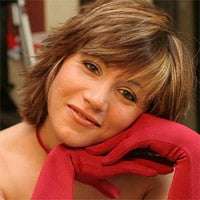 At this Royal Festival Hall concert, the eponymous role was sung by a soprano with a beautiful middle range: warm and voluptuous with a mezzo-ish tint, on which Parisina’s music sat comfortably. Carmen Giannattasio made an impressive London dèbut and, although an announcement was made to the effect that she was suffering from “vocal fatigue”, I doubt if anyone would have known from the ease and security of her singing. She modulated her tone in accordance with her character’s mood and feelings: her love for Ugo or, in the last act, her despair.

Ugo, who does not appear in that final act, was sung in lyrical tenor tones by José Bros, an experienced exponent of Donizetti ‘heroes’. As with Parisina’s, the part of Ugo does not have to contend with exposed top notes or a high tessitura. Bros encompassed long phrases with ease and produced enough metal in his voice to convey Ugo’s rash behaviour in exposing himself to Azzo’s wrath.

As the jealous husband of a woman forced to marry him as a reward for the help he gave her father, the young Uruguayan baritone Dario Solari displayed his anger in a voice well supported and focused if perhaps a size too small. It was, nevertheless, a performance of firm singing of Azzo’s firm resolve.

Nicola Ulivieri’s smooth bass, a basso contante rather than a basso profundo, had a pleasing timbre, devoice of any roughness and well defined. Ernesto, Azzo’s minister, who had looked after the young Ugo, has no aria, but Ulivieri contributed well to recitatives and ensembles, such as the tricky syncopated quartet that ends Act Two. Also without an aria is Imelda, one of those ladies found as companions in so many Italian bel canto operas. She has the least to sing but had a worthy proponent in Ann Taylor.

Extremely good work was done by the Geoffrey Mitchell Choir, and the London Philharmonic responded with assurance to David Parry’s enthusiastic direction, having spent six days prior to this performance on recording the work for Opera Rara, to which one looks forward eagerly, as one does to another Opera Rara/LPO venture, a recording of Rossini’s “Ermione”, with Giannattasio in the title-role, and then present it at the Royal Festival Hall on 28 March.