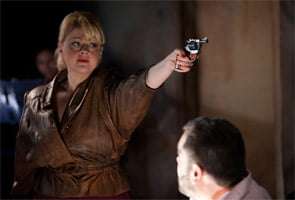 The latest grand opera to get the OperaUpClose reduction therapy is, for some, Puccini’s finest work. This new English version has exchanged the Polka Saloon in California for a tatty internet bar in Soho, run by a jolly girl from Stratford whose picturesque log cabin has been replaced by an ugly high-rise council flat overlooking the Olympic Games park. The Act Three execution scene (done with impressive nastiness) would have been a gangland killing in a multi-storey car park had Minnie not ridden to the rescue on her scooter. The gold prospectors were East European chancers, with Jack a low-life gangland ‘capo’.

The libretto is a thorough rewrite, with, even by OUC’s standards, a high quota of bad language. With two intervals amounting to over half an hour, there are about 100 minutes of music. There have been cuts of around 40 minutes, the main omissions being the Wells Fargo business, the card-cheating scene in Act One and the awkward Red Indian stuff in Act Two – this is playing in assertively PC Islington, after all – and a cast of eighteen had been knocked down to six. 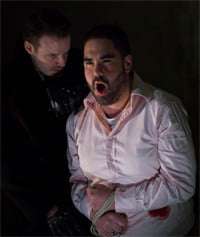 In a rather cynical and prejudice-affirming move, Minnie’s Bible class is replaced by a reading from a foreigner’s guide to UK citizenship – now, where were we? The NHS? Benefits? Housing? Oh yes, the Royal Family – and there are lots of other contemporary references, plus business with mobile phones, texting and Skype. Another neat touch is to have the roving minstrel’s ballad sung by an East European crooner on satellite TV with the boys becoming more and more homesick.

For those who have accessed OUC’s much-touted accessibility in previous productions, ‘West End Girl’ is really the same old shtick and a bit formulaic – minimal production values in a limited space with a high drab-ometer reading and aggressively right-on contemporary reworkings of text and setting, offset by high-definition commitment from the singers. Just for the record, on a freezing night in a keep-your-coat-on theatre, the audience being reached out to was predominantly white, middle-class and upwards from middle-aged, curious rather than seeking a life-changing experience.

Raising the temperature considerably was the full-on Minnie from Laura Parfitt, a sort of pocket Deborah Voigt, with bags of personality, a ringing, pleasing soprano that was for the most part scaled to the tiny auditorium, and engagingly natural, fluent acting – her flashes of doubt and low self-esteem were very convincing and there was a great love-scene between her and Johnson. Her nemesis, Jack Rock, was just as good, played by Tom Bullard with a fine sense of menace matched by his finely controlled, ingratiating baritone. I hope this is a good springboard for them. Minnie’s lover, Johnson, sung by Adam Crockett, was more of a problem. He acted the part of a spivvy, Polish villain well, but there was too much bleat and unvaried volume to his voice for comfort. The three smaller roles were strongly cast, with an impressive Sonora from Simon Meadows.

The skilful downsizing of the score to piano and viola did surprisingly effective duty to the music’s lyrical sweep and was played with panache. The costumes had a brilliantly hideous man-made-fibre sweatiness to them and the video TV projections were bleakly alienating. But I can’t see OperaUpClose having the sort of success with Fanciulla it had with Bohème, probably because Fanciulla isn’t as popular, which rather unpicks the point of doing these so-called liberating reinventions of opera.