Given Antonio Pappano’s significant contributions to London’s musical life (as Music Director of The Royal Opera and as a regular guest-conductor of the London Symphony Orchestra), and because he and his Rome-based St Cecilia Orchestra have notched up some highly-regarded and award-winning recordings for EMI (links below), it’s surprising that this short UK tour (with concerts in Manchester and Birmingham to follow this one in Basingstoke) did not include a date in the capital.

Following three performances of this programme in Rome, The Anvil resonated to a rousing account of the Aida Overture. It’s not to be confused with the official Prelude to Act One, which was in place for the opera’s premiere in Cairo; rather the Sinfonia was intended for the first performance in Italy (at La Scala) but was withdrawn by Verdi before the opening night. Not surprising given its length, twelve minutes in this performance, something of a symphonic poem, a snapshot of the opera’s events. Antonio Pappano and his fine orchestra gave a rendition of innate drama and soul, the sound recognisably Italianate, from piccolo skirls to a deep bass via trumpeters trilling with edgy gusto. 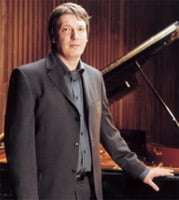 The Liszt was less successful. Boris Berezovsky has technique in spades and gave a full-on account, trenchantly accompanied (fibrous pizzicatos). Not sure about having the triangle player sitting next to the pianist for the third section though (this instrument then divorced from the rest of the percussion in the finale). A little more rumination and poeticism would have been welcome from Berezovsky to counter his impetus – rush, even – and snatched flamboyance, sometimes with the suspicion that we were witnessing a mugging! A tranquil encore might have been nice, but not the concerto’s last section played again – whatever one thought about it initially, appreciation was diminished second time around.

Mahler’s symphonies are everywhere, so it’s a measure of the success of this performance that one listened to the First with fresh ears. The St Cecilia Orchestra makes a very distinctive sound, and its members are enthusiasts for and proud of their trade, there are excellent principal soloists, and all are urged on by their tireless maestro. The acoustic of The Anvil is enviably lucid and well-balanced top to bottom and not as overbearingly bright as some. Thus the dawning and distance (trumpets ideally far-away) that breathes Mahler 1 into life were palpably atmospheric, the listener drawn in to a performance that was deliciously buoyant, delicately traced, shimmering, unforced in climaxes (but with no lack of heft) and earthy, bucolic and macabre as required – full marks for having a solo double bass at the beginning of the third movement (the use of tutti basses, a fairly recent Mahlerian tweak, now discredited). The finale erupted as it should, but was always generated from within, the slower music then teased by Pappano and played ravishingly by the strings (violins ideally antiphonal), but no mere interludes. However numerous the conductor’s personal touches, he never lost sight of this being a symphony, always going somewhere, and when it arrived at its final destination it was resplendent.

The three extras returned us to the Italian opera house – ‘Pas de six’ from the ballet music for “William Tell”, its insouciant gambits as familiar to Britten’s admirers (Matinées musicales) as those of Rossini, and here made pure Alpine pleasure; then the ‘Intermezzo’ from Puccini’s “Manon Lescaut”, passionate and aromatic; and, to close a terrific evening, the final, exhilarating lap of ‘Dance of the Hours’ from Ponchielli’s “La Gioconda” – the St Cecilia Orchestra romping home to take the Gold.